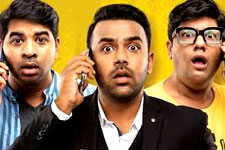 Chaitanya Karthik / fullhyd.com
EDITOR RATING
6.0
Performances
Script
Music/Soundtrack
Visuals
8.0
5.0
6.0
4.0
Suggestions
Can watch again
Yes
Good for kids
Yes
Good for dates
Yes
Wait to rent it
No
After directing two movies, both breezy entertainers, and starring in a supporting role in Falaknama Das, this time Tharun Bhascker puts on the hat of the protagonist. Now if you've watched any of his interviews, one thing you'll know about the man is that he has got a great sense of humour. So when he is associated with a movie that promises to be an entertainer, you expect it to be a laugh riot. Meeku Matrame Chepta unfortunately doesn't live up to those expectations, but if you enter a theatre without any of that context, it will manage to entertain.

Rakesh (Tharun Bhascker), a VJ in LTV and a compulsive liar, falls in love with Steffy (Vani Bhojan), a doctor and a hater of lies. They are about to get married and a day before the wedding, a video of Rakesh sleeping (literally) with another woman surfaces on the internet. The whole movie thereafter revolves around Rakesh and Kamesh (Abhinav) trying to get the video off the internet in what is mostly a fun ride.

The first half is paced very well, and there's hardly a dull moment with the duo of Raks and Kamu. The second half however drags, and would been better if it had been trimmed it by 15 minutes or so. The movie turns especially dull in the last forty minutes or so with the jokes becoming repetitive, and at one point you can't help but wish for the movie to end already. Indeed, the runtime is only two hours, but the pace in the second half makes you feel like it is much longer. Also, the plot twist at the end feels just contrived, and the story would have been the same with or without it.

The best part about the movie, as is the case with Pellichoopulu and Ee Nagariniki Emaindi, is that the humour withdraws itself from the cinematic comedy we've been conditioned to embrace, and is rooted deeply in everyday conversations. And that is what mainly works for the film.

Both Tharun Bhascker and Abhinav are good in their roles, with each one's comic timing complementing that of the other. The duo carry the whole movie on their shoulders, and do it with élan. Vani Bhojan, although the female lead, has limited scope for performance because all she needs to do is put on a passive aggressive face whenever she shows up. The rest of the cast do a good job with the characters they essay.

Meeku Matrame Chepta couldn't really have been an out and out laugh riot given that there was only so much scope in the subject they had chosen, but the crew have still done a decent job. As far as the music, screenplay and cinematography are concerned, there aren't any highlights there - they are passable, but don't help the movie much.

Overall, this one is a decent one-time watch for an outing with some bumchums. While it doesn't have the subtlety and charm of Tharun's movies as a director, it still manages to tickle your funny bone. A few sub-plots with more laughs would have made it a much better experience, but it's a dry weekend and this one meets the legally mandated entertainment levels.
Share. Save. Connect.
Tweet
MEEKU MAATHRAME CHEPTHA SNAPSHOT 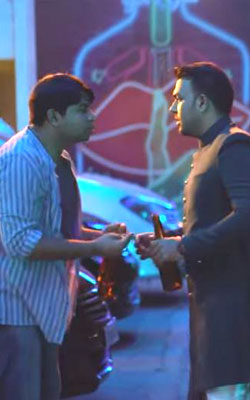 ADVERTISEMENT
This page was tagged for
Meeku Maathrame Cheptha telugu movie
Meeku Maathrame Cheptha reviews
release date
Tharun Bhascker, Abhinav Gomatam
theatres list
Follow @fullhyderabad
Follow fullhyd.com on
About Hyderabad
The Hyderabad Community
Improve fullhyd.com
More
Our Other Local Guides
Our other sites
© Copyright 1999-2009 LRR Technologies (Hyderabad), Pvt Ltd. All rights reserved. fullhyd, fullhyderabad, Welcome To The Neighbourhood are trademarks of LRR Technologies (Hyderabad) Pvt Ltd. The textual, graphic, audio and audiovisual material in this site is protected by copyright law. You may not copy, distribute, or use this material except as necessary for your personal, non-commercial use. Any trademarks are the properties of their respective owners. More on Hyderabad, India. Jobs in Hyderabad.