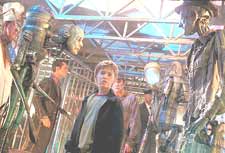 Smriti Kashyap / fullhyd.com
EDITOR RATING
10
Performances
Script
Music/Soundtrack
Visuals
NA
NA
NA
NA
Suggestions
Can watch again
NA
Good for kids
NA
Good for dates
NA
Wait to rent it
NA
AI is one of those rare flicks where while watching the film all you're thinking is how awesome the movie is. You are spellbound from the start right until the finish, both by the script and by the execution of it.

The time is the not-so-distant future where the population is under the strict control of the government. A couple decides to go in for a robot which will fill the void in their lives caused by their only son being stuck in a tube with frost growing on his face. The funda is that he's being cryogenically frozen until the cure for his disease is found.

The couple, Henry (Sam Robards) and Monica (Frances O'Connor), decides that David (Haley Joel Osment) is just what the doctor ordered, and takes home this robot that's been programmed to cook, clean, mop up and also, as a festival bonus, to 'love'. The couple is pretty thrilled with this mecha-boy, who soon becomes a part of their everyday existence. David is a regular kind of kid, except that he can't exactly prevent his fuses from blowing off while eating salads - despite the fact that salads are an excellent source of iron!

All is well until Sleeping Beauty - the son - emerges from his slumber, and David is unceremoniously packed off. The adoptive mom decides that instead of sending him off to the junk yard to be turned into scrap, she'll let him loose. David, armed with his teddy bear, makes his journey through the cold, dreary world with the help of his new friend Gigolo Joe (Jude Law).

Gigolo Joe is a sleek looking mecha who oozes optimism and a truckload of charm. They both head out into a journey of self-discovery and a quest to find the purpose of their existence.

The film then turns absolutely wondrous, with the boy making it to places such as the fair where the robots are being destroyed. There are some jaw-dropping visuals here, with a submerged Manhattan and skyscrapers popping out like reeds. The film begins to resemble a fairy tale at times, taking on a likeness between the tale of 'The Boy And The Ice Princess' and that of 'Wizard Of Oz'.

Haley Joel as the robo-boy portrays his role with a quiet melancholy which makes the movie all the more gripping and almost real. The parts where he tries to find the elusive bridge between machine and humanity leave you bawling all over the place. He strikes the right balance between android and human, and seems to have a visage that oozes innocence coupled with vulnerability.

The film is quiet rightly a science fiction fairy tale, and towards the end does not quite provide you with all the answers that you might be looking for. But what it does provide is a lush canvas for the presentation of a visual that might well occur in the future. And like a true blue sci-fi, leaves the door open for formulating your own interpretation of the story that you just saw. The result is a warm fuzzy feeling at the end of the flick which serves as a proof that you've just seen something thought provoking.

AI is Spielberg's first scriptwriting project after the excellent 'Close Encounters Of A Third Kind', and the brilliance shines through. This flick was originally that of maverick filmmaker Stanley Kubrick, and was taken over by Spielberg after his death. So it essentially remains a Kubrick film seen through the eyes of Spielberg.

Storytelling at its most amazing, AI offers the best possible in terms of the script and in terms of performances. It is a film that will haunt you for days, and whether or not movie-going audiences will appreciate the flick depends on how far down the rabbit hole they are willing to go.
Share. Save. Connect.
Tweet
AI: ARTIFICIAL INTELLIGENCE SNAPSHOT

See AI: Artificial Intelligence full details
AI: ARTIFICIAL INTELLIGENCE USER REVIEWS
1 - 15 OF 17 COMMENTS  |  NEXT  |  LAST
POSITIVE  |  NEGATIVE |  NEWEST  |  OLDEST  |  MOST HELPFUL  |  LEAST HELPFUL
USER RATING
5.5
27 USERS
Performances
Script
Music/Soundtrack
Visuals
NA
NA
NA
NA
Can watch again - NA
Good for kids - NA
Good for dates - NA
Wait to rent it - NA
Sam on 23rd Jan 2002, 5:32am | Permalink
Nice review, I fully agree to Smriti and to add I think AI is probably the best sci-fi movie till date which for the first time has a teriffic script rather than just the visual appeal
RATING
10
Harindra Dave on 22nd Jan 2002, 8:45pm | Permalink
people who read sci fi like isaac asimov and arthur.c.clarke, will find the movie more relatable than the others who dont.
you have to to have a understanding of sci fi to actually get into the skin of the film. obviously miss. kashyap is a person who has read the above authors. it is clear in the revioew itself that the movie is not so much a movie, than it is sci fi at it's best.as for thepersons not into reading, it's not too late to start. great review, mature writing.
RATING
10
Marshall Mathers on 22nd Jan 2002, 7:37pm | Permalink
AI is a sick movie....if there was a sicker movie this is it...i slept thru the movie...it defies logic...tryin to bridge the DIVIDE between robos and humans...Yes...this can be termed as a fairy tale...but thats it...and of all people Steven Spielberg had to make this one....
RATING
2
Abraca Dabra on 22nd Jan 2002, 12:35pm | Permalink
mirs.kashya0p, nice article, but u forgot to mention a very important point..i.e which theatre the movie is running.
RATING
4
Kamikaze Pilot on 22nd Jan 2002, 12:30pm | Permalink
the movie is brilliant. no doubt about it. but i think its a remake of small wonder. hee hee. anyway smooth style of writing.
RATING
8
Arun on 22nd Jan 2002, 1:04am | Permalink
Please don't see the movie. The first half is OK, but the second half is totally crap
RATING
2
Ash on 22nd Jan 2002, 12:39am | Permalink
hey smriti just b'coz it is steven's, doesn't mean u have to praise it. it doesn't deserve that much of fame. it is an ok kinda' of a movie, not that good.
RATING
2
D.M KARIA on 21st Jan 2002, 9:39am | Permalink
sk..er ...smriti kashyap? cool.
RATING
8
Deepak Chisti on 20th Jan 2002, 8:59pm | Permalink
the review meshes well with the movie. i spent the best 30 bucks of my life. bravo smriti
6 stars for the review!
RATING
10
Natural Intelligence on 20th Jan 2002, 8:49pm | Permalink
mast movie baap! *************** stars
RATING
10
Rajiv Vohra.p on 20th Jan 2002, 8:47pm | Permalink
thanks srimti. i read the article in the afternoon and i just watched the movie. it was great.
RATING
8
Devyani Athalve on 20th Jan 2002, 8:44pm | Permalink
A.I is the best movie i have come across in the near future and not to forget the review is excellent and true to the last bit. great work.
RATING
10
Chandragupta Bharya on 20th Jan 2002, 8:25pm | Permalink
nice review and movie but haven't understood the funda of science fiction and fairy tale.

ADVERTISEMENT
This page was tagged for
AI: Artificial Intelligence english movie
AI: Artificial Intelligence reviews
release date
Haley Joel Osment, Jude Law
theatres list
Follow @fullhyderabad
Follow fullhyd.com on
About Hyderabad
The Hyderabad Community
Improve fullhyd.com
More
Our Other Local Guides
Our other sites
© Copyright 1999-2009 LRR Technologies (Hyderabad), Pvt Ltd. All rights reserved. fullhyd, fullhyderabad, Welcome To The Neighbourhood are trademarks of LRR Technologies (Hyderabad) Pvt Ltd. The textual, graphic, audio and audiovisual material in this site is protected by copyright law. You may not copy, distribute, or use this material except as necessary for your personal, non-commercial use. Any trademarks are the properties of their respective owners. More on Hyderabad, India. Jobs in Hyderabad.