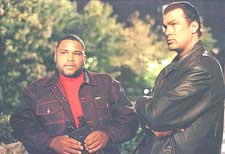 EDITOR RATING
3.0
Performances
Script
Music/Soundtrack
Visuals
NA
NA
NA
NA
Suggestions
Can watch again
NA
Good for kids
NA
Good for dates
NA
Wait to rent it
NA
If you think bloody fights, high power car-bike-helicopter-foot chases, angry (and if you ask me, rather old) cops, suspicious drug deals and more bloody fights make up an action flick, Exit Wounds will certainly make you think again, and again, and again - it is one of those movies that ignore the necessity of a plausible plot, credible characters and intelligent dialogue. The result is that you exit the theater with your sensibilities wounded.

Orin Boyd (Steven Seagal) is a cop who thinks that the entire world is his responsibility. This makes him take himself rather seriously, saving the vice-president's life in the bargain. His bosses dislike his gravity and bravery so much that he gets transferred to the meanest and toughest zone in Detroit as a punishment for being disrespectful of authority (we share the huh!).

Here, Seagal comes across a drug operation that, him being who he is, he has to bust. His investigation leads him (and, unfortunately, the audience) in various uninteresting directions, including suspicious colleagues and the terribly rich gangster Latrell Walker (DMX). The real culprit, though, is supposed to be a surprise, but by the time the movie gets there, you are too numb and in no mood to be surprised.

Foolish dialogues and bad editing do discredit the flick even more. Seagal looks in control only when he is bashing someone up - at all other times he looks lost. Comedy (if you can call it that) comes in the form of an outrageous group therapy session that Seagal is forced to attend, and Walker's irritating sidekick. There's nothing in this movie that recommends it - watch it only if you are a real hard-core action-flick buff, and even then at the risk of boredom.
Share. Save. Connect.
Tweet
EXIT WOUNDS (HINDI) SNAPSHOT

ADVERTISEMENT
This page was tagged for
Exit wounds in hindi dubbed free download
WXIT woukds movie hollywood hindi donlowd
wounds full movie hindi dubbed download
Exte wounds 2001 full Hollywood movie Hindi download
exit wounds full movie in hindi dowlod hd
Follow @fullhyderabad
Follow fullhyd.com on
About Hyderabad
The Hyderabad Community
Improve fullhyd.com
More
Our Other Local Guides
Our other sites
© Copyright 1999-2009 LRR Technologies (Hyderabad), Pvt Ltd. All rights reserved. fullhyd, fullhyderabad, Welcome To The Neighbourhood are trademarks of LRR Technologies (Hyderabad) Pvt Ltd. The textual, graphic, audio and audiovisual material in this site is protected by copyright law. You may not copy, distribute, or use this material except as necessary for your personal, non-commercial use. Any trademarks are the properties of their respective owners. More on Hyderabad, India. Jobs in Hyderabad.