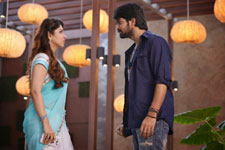 Ravi Kandala / fullhyd.com
EDITOR RATING
4.0
Performances
Script
Music/Soundtrack
Visuals
4.0
4.0
5.0
5.0
Suggestions
Can watch again
No
Good for kids
No
Good for dates
No
Wait for OTT
No
The compulsion to become a mass hero in Telugu cinema must be overwhelming. Every hero who does a couple of soft roles and tastes even middling success gets into a tearing hurry to get into mass hero mode - one who can outwit 20 villains and beat up 40 goons and romance his heroine while dangling from a cliff one-handed.

Naga Shaurya, the sweet-faced guy from Oohalu Gusagusalade and Dikkulu Choodaku Ramayya, is the latest to succumb to this temptation. He plays the role of Krishna, a lout who is a pain for the entire village he lives in and is hence banished. Krishna avers to the village folks that he'll go to the city, earn a crore and come back, to teach everyone a lesson.

He proceeds to the city and becomes a loan recovery agent. While recovering one such loan, he meets Srisailam (Zakir Hussain), a don, and starts working for him. Srisailam decides to use Krishna as a benami for an illegal business and bump him off once he's done. How Krishna goes one up on Srisailam and wins money, love, fame, Indian Idol and India's Got Talent forms the rest of Jaadugaadu. Okay, maybe not the last two, but they might as well have added those, too.

Jaadugaadu starts off fine. It introduces a hero desperate to get rich and a ruthless villain, and gradually shows the hero getting sucked into the quagmire called desire filled with the quicksand of crime. We leave for the interval when several threads converge to one end - putting Krishna in danger. But once we come back, instead of going from A to B in one straight line, the director chooses to wander first from A to Z, and move B to a point after Z.

The second half is slow, and has terrible, vulgar comedy involving Saptagiri who swallows a fistful of Viagra pills and roams around the house holding his lungi up for around 10 minutes talking about how he's totally, um, charged up. Also, the desire to cram in too many twists leads to too many subplots, making the film stretch for longer than necessary.

Naga Shaurya does well - he still tends to speak too fast, but enacts his mass role well. Sonarika Bhadoria, the actress who played Parvati in the TV soap Devon Ke Dev Mahadev, surprises everyone with a remarkably glamorous performance. She also locks lips with Shaurya quite a few times, much to the delight of some sections of the audiences. The film has a huge supporting cast, and all of them support it ably.

The music is decent, and the songs are well-picturised. The technical values are decent, too - there's good cinematography and good action choreography. And no bouncing goons in this one is a relief.

If anyone is to be blamed for Jadugaadu ending up as a sub-par product despite all its positives, it is the director Yogi. Clearly, his heart was into making a good con-action thriller, but his mind probably kept telling him that he has already had a couple of flops and so needs to insert mass elements. Jadugaadu then ends up being a mishmash, and an avoidable one at that.
Share. Save. Connect.
Tweet
JAADUGADU SNAPSHOT 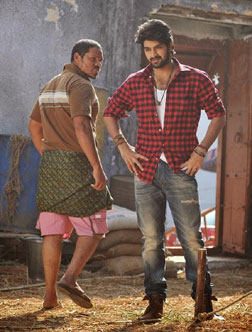 ADVERTISEMENT
This page was tagged for
Jaadugadu telugu movie
Jaadugadu reviews
release date
Naga Shourya, Sonarika Bhadoria
theatres list
Follow @fullhyderabad
Follow fullhyd.com on
About Hyderabad
The Hyderabad Community
Improve fullhyd.com
More
Our Other Local Guides
Our other sites
© Copyright 1999-2009 LRR Technologies (Hyderabad), Pvt Ltd. All rights reserved. fullhyd, fullhyderabad, Welcome To The Neighbourhood are trademarks of LRR Technologies (Hyderabad) Pvt Ltd. The textual, graphic, audio and audiovisual material in this site is protected by copyright law. You may not copy, distribute, or use this material except as necessary for your personal, non-commercial use. Any trademarks are the properties of their respective owners. More on Hyderabad, India. Jobs in Hyderabad.