Parmanu: The Story of Pokhran Review 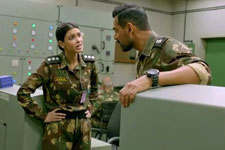 T J Reddy / fullhyd.com
EDITOR RATING
5.0
Performances
Script
Music/Soundtrack
Visuals
6.0
5.0
5.0
6.0
Suggestions
Can watch again
No
Good for kids
No
Good for dates
No
Wait to rent it
Yes
Alright, nerds listen up. This is a film about scientists and engineers. This may be the only time in mainstream Bollywood history that the stories of scientists and engineers will ever be made cool. I am one, too, and the fact that the movie thinks we look like the John Abrahams and Diana Pentys of the world is fine by me. Scientists are clear, concise, to the point, and communicate only in exposition, so let's not beat around the bush here. National security has no time for our tomfoolery.

Based on the top-secret Pokhran nuclear tests conducted by a rag-tag group of scientists and engineers, one of whom went on to become President, Parmanu follows the life and times of John Abraham's Ashwath Raina, a no-nonsense patriot whose primary reason for being is to serve his country and make it a nuclear superpower.

Although his first attempts at this goal are thwarted by a combination of corrupt political manoeuvring and US satellite surveillance, he is given a second chance by Boman Irani's Himanshu Shukla (Principal Secretary to the PM). Buoyed by this newfound opportunity, Ashwath assembles a ragtag / extremely secular team of the most brilliant minds India has to offer. The team fight against the prying eyes of US and Pakistani spies, surveillance satellites and the seemingly imminent collapse of a shaky coalition government in an effort to make India the sixth nuclear power of the world.

There are also sub-plots involving Ashwath's family, the tension between a hardened army man and a claustrophobic scientist, and finally, an older scientist complaining about the heat in Rajasthan. Wait, we thought this film had no time for tomfoolery - where did all these frivolous plot points come from?

They exist because making a film about the complexities of conducting a nuclear test cannot be achieved without a hefty dose of human drama. Many of us in the audience are in no way equipped to fully understand the mathematics and physics that go with conducting an experiment of such scale, but what we can comprehend are emotion, a ticking clock and patriotism. The film has oodles of the three of them, but not all of them were created equal.

Parmanu is at its narrative crest when dealing with the ticking clock. With clearly defined goals and an ominous antagonist, the film puts its protagonists' backs against the wall and has them fight their way out of their predicament. Abraham and co (in front of the camera) and Sharma and co (behind it) give the audiences a reason to empathize with the trials and tribulations faced by these men and WOMAN.

However, the film's runtime becomes palpable when it begins to delve into the human aspect of its story. Its nimble narrative is wrestled to the ground with needless sub-plots. There are extremely pressing issues that could have been addressed here that deal with both ends of the political spectrum. Simply put, a high-school debate between two ideologies that argue the merits and demerits of a country becoming a nuclear power could have been endlessly more compelling than Ashwath's wife suspecting him of cheating on her with another woman.

This is not an isolated incident - it is but an example of the movie's poor handle on every other character that is not its lead. John Abraham has come a long way from that guy who made some questionable choices while driving a Jeep in Jism. His cool, confident persona blends surprisingly well with one of a focused and driven engineer. His arc mirrors that of many heros who rise from disgrace to prove themselves worthy of praise. We may have seen it before, but we've never seen Abraham do it, and believe it or not, he makes it special.

The film however doesn't dedicate the same amount of time and care to everyone else around him. The ensemble cast come off as low-rent caricatures from time to time simply because their characters are unidimensional. For example, the character of the south-Indian scientist Puru Ramachandran (Ajay Shanker) can be described in all of two phrases: of south-Indian descent (and hence loves banana chips), and works for ISA (renamed ISRO). What is his story? What drives him? What is his stand on India's position on the world stage? Do we care? Yes. Does the film care enough to develop his character? No. You know Ashwath Raina's point damn it and that's all that counts.

Indeed, the reductive form the film takes while narrating its tale shoots down any appeal the secondary characters may have had. This, in turn, makes any decent acting performance put forth by the actors essaying these roles forgettable.

The film's score is a paradox of Terminator-esque proportions. For a movie that waxes poetic about stepping out of America's shadow, many snippets of its score are wholly reminiscent of Interstellar's inimitable auditory experience. While the songs themselves serve no purpose other than underlining montages, the score's brazen repurposing of something so iconic is baffling.

What isn't baffling is seeing a primarily indie director struggle under the weight of a big budget Bollywood film. Abhishek Sharma, the mind behind the Teri Bin Laden movies, has a distinct cinematic voice. This is extremely evident when the film employs unorthodox editing choices when communicating exposition to the audience. There is a genuine attempt at making the movie as visually appealing as it can be. However, Sharma finds the space to do this primarily during the initial exchanges. As the film zeroes in on Pokhran and stays there, Sharma finds himself content with the tried and tested. The visual inventiveness is all but sacrificed for the purposes of keeping the story ticking along.

To its detriment, the movie never builds on its strengths in a convincing fashion. As we've established by now, it has its positive moments (and that one shot of blast going off is genuinely mesmerising), but a genuinely spell-binding film fires positives from all cylinders, simultaneously. Parmanu, however, is a textbook example of the parts being better than the whole.
Share. Save. Connect.
Tweet
PARMANU: THE STORY OF... SNAPSHOT
PARMANU: THE STORY OF POKHRAN SNAPSHOT 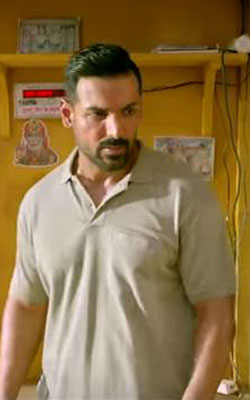 ADVERTISEMENT
This page was tagged for
Parmanu: The Story of Pokhran hindi movie
Parmanu: The Story of Pokhran reviews
release date
John Abraham, Diana Penty
theatres list
Follow @fullhyderabad
Follow fullhyd.com on
About Hyderabad
The Hyderabad Community
Improve fullhyd.com
More
Our Other Local Guides
Our other sites
© Copyright 1999-2009 LRR Technologies (Hyderabad), Pvt Ltd. All rights reserved. fullhyd, fullhyderabad, Welcome To The Neighbourhood are trademarks of LRR Technologies (Hyderabad) Pvt Ltd. The textual, graphic, audio and audiovisual material in this site is protected by copyright law. You may not copy, distribute, or use this material except as necessary for your personal, non-commercial use. Any trademarks are the properties of their respective owners. More on Hyderabad, India. Jobs in Hyderabad.