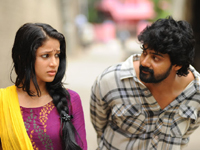 Deepa Garimella / fullhyd.com
EDITOR RATING
4.0
Performances
Script
Music/Soundtrack
Visuals
5.0
4.0
8.5
8.0
Suggestions
Can watch again
No
Good for kids
No
Good for dates
Yes
Wait for OTT
Yes
To begin with, let's give credit where it is due. Firstly, Andaala Rakshasi features some amazing scrap art, thanks to one of its protagonists being an artist. Secondly, the Yemito song deserves special mention, not just for being awesome song that it is, but also for lending the movie a special kind of tone.

But other than that, if this review were the 20-something "Andaala Rakshasi" of this movie, the film itself would be Gowtham, her admirer, who wants her to fall in love with him even though they know nothing about each other. The girl would gaze puzzlingly at the young man, who smiles beatifically even as his large, soulful eyes seem to have gone to sleep. Gowtham would silently wait for her to come around, and when she's not looking, break things to vent his frustration about the unrequited love. All the while, the girl would continuously contort her face suitably to show varied levels of pain and bewilderment. After a while, she would grimace, shut her eyes, clench her fists, and scream "CHACCHIPOVALANIPISTONDIIII!". In caps, yes.

Of course, that would be mean and overreacting. But considering the number of times "Chacchipovalanipistondi", "Champesta", "Chacchipo" and miscellaneous other forms of the word are thrown around (though not menacingly) by various characters in the movie, you wouldn't think so. The movie isn't as bad as it is misguided.

The story goes like this. Gowtham (Rahul Ravindran) falls in love with Mithuna (Lavanya Tripathi) at first sight. He tells his rich father that he has found his real love, and stalks her around for a bit. But their next real meeting is in hospital, after Mithuna has had a ghastly accident. Gowtham tells his father that he wants to marry her, and the next thing we know is that the two are married (but after a while you're told they're not).

However, Mithuna is emotionally unavailable to him, not having gotten over the death of her ex-lover, Surya (Naveen Chandra). Will she ever bury her past and embrace the present? It is an interesting concept, but as you will discover, a badly made-up story leading to a tragic end.

The thing worse than being an angsty film is to try and pretend to be one. And that is what Andaala Rakshasi is - a movie that tries too hard to be whatever it is trying to be. Beginning as a breezy oddball romance with very contemporary touches, it moves on to heavily sigh at adversity, never quite connecting emotionally with you.

The whole thing is like a series of still-life paintings. The beautiful visuals do alleviate your viewing experience, but don't help the fact nothing's really happening on screen. Andaala Rakshasi's effort to be an esoteric piece of art basically seems overdone and contrived. And the climax ruins it all anyway.

The Gowtham-Mithuna sequences are vacant - for a long, long time, the two of them literally just sit around in Gowtham's father's hill resort, moping; Mithuna gazes into space and Gowtham gazes at her. And why he should pine away for this frankly unremarkable woman who he has only ever seen from a distance is hard to understand. It is only the Surya-Mithuna romance that has any semblance of meaning - the two were at least involved with each other. Plus, their chemistry is palpable.

The Geetanjali influence is apparent, and not just in the misty, verdant hill-station settings. The heroine's look and mannerisms are inspired by Geetanjali. The all-consuming love that characters seem to have for one another is also rooted in Mani Ratnam's favourite depictions of romance.

Also - and this is one of the most grating things about the film - characters in Andaala Rakshasi keep screaming their dialogues out as though they were conversing with someone from across a river. Remember the scene in Geetanjali, at the railway station, in which Nag demands "Ye??" Next, remember Kamal Hassan (actually, SPB) in Guna's "kammani ee premalekha song", screaming "...idi mamoolu prema katha kadu!!" ? Now imagine an entire film with these two in conversation, with each maintaining the same pitch and volume. This is made worse by the fact that none of the actors seems to be Telugu-speaking and that yet all of them haveto dub for themselves.

Rahul Ravindran sounds exactly like Siddharth, with every single intonation in place. As for his acting, he wears just two expressions throughout the movie, looks mostly clueless, and lets the high pitch of his voice do the talking, with rather avoidable results.

Lavanya Tripathi is a nice find, and her girl-next-door quality of beauty is appealing. She can sure emote, but Mithuna's constant grimacing and sadness gets old fast. Somehow, Naveen Chandra's rock-solidness is appealing, and ends up making Surya a much more likeable guy than Gowtham.

The director apologizes, before the title credits, that he wasn't able to entirely recreate the 1991-92 era although he would have liked to. Well, the settings are nicely done, with little nuances being adhered to. Mithuna's family is refreshing to watch for its charming touches of middle class life. And we've already raved about the scrap art - it isn't exhibited all over the place, but the model of Mithuna's face made with alcohol bottles is a breathtaking example.

The songs are a pleasant collection, and add much to the movie's style and texture.

The music and the PR might drive curious audiences into the multiplexes, but we don't see it thrilling them much. Catch it if you have your priorities right.
Share. Save. Connect.
Tweet
ANDALA RAKSHASI SNAPSHOT 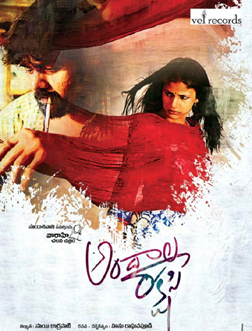 See Andala Rakshasi full details
ANDALA RAKSHASI USER REVIEWS
1 - 4 OF 4 COMMENTS
POSITIVE  |  NEGATIVE |  NEWEST  |  OLDEST  |  MOST HELPFUL  |  LEAST HELPFUL
USER RATING
4.3
6 USERS
Performances
Script
Music/Soundtrack
Visuals
NA
NA
NA
NA
Can watch again - NA
Good for kids - NA
Good for dates - NA
Wait for OTT - NA
Shree on 1st Oct 2012, 7:18pm | Permalink
Movie is like a silent gesture of Love. The song Yemito is good. Mithuna and Surya characterisation is good. Yes Goutham character is also good but i dont think that we have such kind of True lover all are stupids now. Goutham should have not died in the climax. Goutham named actor is pretty good.
RATING
5
Sunil on 16th Aug 2012, 9:22pm | Permalink
I thnk a good movie but climax made it to digest it a very difrent climax hard to digest gautam amar hey
SANJAY on 10th Aug 2012, 10:56pm | Permalink
Watch Trailer : https://www.youtube.com/watch?v=j2FB3AqJOgw&feature=relmfu
Rajamouli on 10th Aug 2012, 11:44pm | Permalink
Straight Telugu film with Sambar flavor.
Phaneendra Kumar Pappu on 10th Aug 2012, 9:28pm | Permalink
The review is spot on. The actors have got nothing much to do except screaming and wooden expressions.

ADVERTISEMENT
This page was tagged for
andala rakshasi telugu rockers
andala rakshasi movie
andala rakshasi climaax
Andala Rakshasi telugu movie
Andala Rakshasi reviews
Follow @fullhyderabad
Follow fullhyd.com on
About Hyderabad
The Hyderabad Community
Improve fullhyd.com
More
Our Other Local Guides
Our other sites
© Copyright 1999-2009 LRR Technologies (Hyderabad), Pvt Ltd. All rights reserved. fullhyd, fullhyderabad, Welcome To The Neighbourhood are trademarks of LRR Technologies (Hyderabad) Pvt Ltd. The textual, graphic, audio and audiovisual material in this site is protected by copyright law. You may not copy, distribute, or use this material except as necessary for your personal, non-commercial use. Any trademarks are the properties of their respective owners. More on Hyderabad, India. Jobs in Hyderabad.