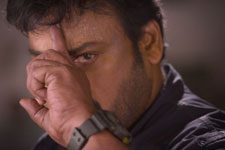 Ravi Kandala / fullhyd.com
EDITOR RATING
6.5
Performances
Script
Music/Soundtrack
Visuals
8.0
6.0
6.0
7.0
Suggestions
Can watch again
Yes
Good for kids
No
Good for dates
No
Wait for OTT
No
There are movies, and then there are movies. And then there are events. The Megastar returning to the silver screen after a 10-year hiatus is most certainly the third category. And given the mad rush in the theatres today and the collections from the premieres across the world, it is clearly an event that is unlikely to be repeated in several years.

Before the movie released, though, there was much speculation. Why did Chiranjeevi pick a remake for his comeback? Why did he have to try to romance Kajal who's already worked with his son in two films? Why did he choose Vinayak, who delivered a huge dud with Akhil last year? Why does Chiranjeevi not act his age? The film's unit, though, seemed strangely confident and had only one answer - that this script was perfect for his comeback, and would satisfy his fans and the general audience alike. And we have to agree that the unit was right.

Khaidi No. 150 starts with Katthi Seenu (Chiranjeevi) escaping from a prison in Kolkata. He then comes to Hyderabad where he finds Shankar (Chiranjeevi), a look-alike. When Seenu finds out that Shankar is due to get a cheque worth Rs. 25 lakhs from the government, he starts acting like Shankar to get his hands on the money. Meanwhile, he finds out how Shankar is waging a lone battle against a corporate strong man Agarwal (Tarun Arora) to save the farmers of his village, and decides to take up the cudgels on his behalf. The remaining story is about how Seenu manages to win the battle of the farmers in his own inimitable style.

Khaidi No. 150 is no great shakes as a script. It feels like almost every movie you've seen where the hero plays a double role. And in true Vinayak style, he also manages to mix a bit of a message into the story - this time it is about farmers whose lands are being taken over by corporate bigwigs. Vinayak clearly knows the expectations, and plays it ultra-safe by creating a film with the right mix of comedy, dance, action and social messages. The last 20 minutes, right from the Ammadu song, feel like they drag, but that is inevitable when the rest of the movie exclusively focuses on entertainment. The interval bang is awesome - when Chiranjeevi says "After a gap, Boss is back", there is no way the fans cannot scream their lungs out.

Performance-wise, there are no prized for guessing who dominates Khaidi No. 150 - it is a Chiranjeevi movie from the beginning to the end, and the man is totally up to the hype. He's lost weight and become fitter for the role, and dances and acts like he was never away. Kajal and Tarun Arora go through the motions wherever required. Ali and Brahmanandam get meaty parts, too, and do well. The rest of the supporting cast do well, too.

Technically, the film is top-notch - be it Ratnavelu's visuals or Devi Sri Prasad's music or the fights, they are all as grand as they are expected to be for a superstar vehicle. The fights deserve special mention - the interval bang and the coin fight are both sure to send the masses into a tizzy.

Be warned - this reviewer is a massive fan. If you're someone who does not enjoy regular masala fare and does not understand the hype around the Megastar's comeback, don't even bother. But if you enjoy a mass entertainer and understand even a bit of the hype, try and book tickets for whatever show is available early next week - 'cos we don't think there are any tickets left for all of this opening week. Boss is well and truly back!
Share. Save. Connect.
Tweet
KHAIDI NO. 150 SNAPSHOT 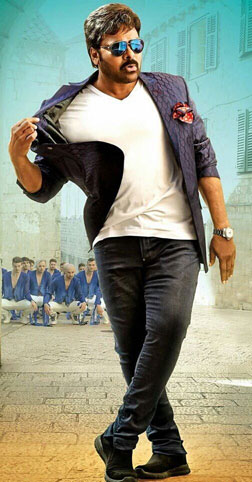 See Khaidi No. 150 full details
TOP COMMENT
RGV Fan on 15th Jan 2017, 12:06am | Permalink
Naga babu Saaaar, is this your superrr anna's film ??
6
1
KHAIDI NO. 150 USER REVIEWS
1 - 9 OF 9 COMMENTS
POSITIVE  |  NEGATIVE |  NEWEST  |  OLDEST  |  MOST HELPFUL  |  LEAST HELPFUL
USER RATING
2.0
2 USERS
Performances
Script
Music/Soundtrack
Visuals
NA
NA
NA
NA
Can watch again - NA
Good for kids - NA
Good for dates - NA
Wait for OTT - NA
Priya on 17th Jan 2017, 10:47am | Permalink
For all those who think this review is biased, paid etc etc, kindly read the last paragraph where the reviewer has mentioned that he is a huge fan, which, as far as I know, has never been done by a reviewer before. Therefore, kindly take this review with a pinch of salt.
Kanye on 25th Jan 2017, 3:34am | Permalink
Yo, do you know what bias is? He is a fan and obviously a fan would speak great things about his favorite star. Which is what makes this review biased.
TeluguLives on 17th Jan 2017, 11:59am
.
RGV Fan on 15th Jan 2017, 12:06am | Permalink
Naga babu Saaaar, is this your superrr anna's film ??
Suresh on 14th Jan 2017, 1:28am | Permalink
It's totally paid review
RATING
1
Usualsuspekt on 14th Jan 2017, 8:55pm | Permalink
Agree
Arun on 14th Jan 2017, 1:23am | Permalink
Just an average movie just you can watch for boss,
Story losses it's originality, and direction also poor,
And why heroin is their? Just for songs,
For now on word's I will not trust fullhyd review because of your good review we went for movie
But I am very much disappointed with this movie.
I love Chiranjivi a lot, but more then I love a films lover...
Abhishek on 12th Jan 2017, 10:22pm | Permalink
Lol..for khaidi no 150 which is remake we have a chiru fan reviewing the movie with heaps of raises all about it. For GPSK we have a hater who doesn't even acknowledge the effort.

Live in your lousy dreams
Kanye on 13th Jan 2017, 4:39am | Permalink
I'd like to disagree. The reviewer of GPSK analyzed the film very deeply, although he may have gone deeper than what was necessary. I didn't sense any hate though. I've read his other works and I can say confidently that he is unbiased unlike this bimbo who reviewed KN150
Kanye on 12th Jan 2017, 4:59pm | Permalink
Ok, the whole point of reviews is supposed to be giving an unbiased view on a film. A reviewer should differentiate from the average moviegoer and analyze the product. We didn't come here for you to go on a rant about how amazing this film is just because Chiranjeevi is in it and the fact that he is truly back after about a decade.
It would've been better if you gave an actual review of the film and added something like "it is a feast" at the bottom instead of alloting 5 paragraphs to describing the charisma of the megastar.
In my view, Kaththi was better than Khaidhi No. 150, although the comedy was good.
Hype buster on 11th Jan 2017, 10:29pm | Permalink
In what way this stupid movie is better than Vangaveeti, Can you explain?????
PP_Ba___yya on 12th Jan 2017, 3:36am
.
Ashwin on 11th Jan 2017, 9:24pm | Permalink
Few things I would definitely say that did not work in the movie was the editing and choreography.....while Chiranjeevi was really good with his moves....the extras look like they cannot dance to save lives......i mean there were so many songs where the dance was totally out of sync....i just don't understand why some of these were not edited out....example - you can clearly see a piece of cloth/ costume falling off an extra in the Rattaalu song or how a couple of the white extras totally missing steps......dont they watch and edit the movie before the release
Siva Ram Yellapragada on 11th Jan 2017, 6:41pm | Permalink
Boss.. Story mottham rasesev .. Is it really a review any more?.. Think about it!
Gautamaputra on 11th Jan 2017, 7:30pm
.
LEAVE A COMMENT
fullhyd.com has 700,000+ monthly visits. Tell Hyderabad what you feel about Khaidi No. 150!
MORE MOVIES
Latest Reviews
Dhaakad
Bhool Bhulaiyaa 2
Dhagad Saamba
Shekar
Jayeshbhai Jordaar
more
Sarkaru Vaari Paata
Doctor Strange In The Multiv...
Ashoka Vanamlo Arjuna Kalyan...
Runway 34
Heropanti 2
Acharya
Kanmani Rambo Khatija
Jersey (Hindi)
K.G.F. Chapter 2
Beast (Telugu)
Contemporary Reviews
Gautamiputra Satakarni
Live By Night
OK Jaanu
Shatamanam Bhavati
The Founder
more
The Bye Bye Man
Raees
Allied
A Monster Calls
Coffee With D
Appatlo Okadundevadu
Pittagoda
Okkadochadu
Saptagiri Express
Random Reviews
Stuart Little 2 (Hindi)
Love
Aap Mujhe Achche Lagne Lage
Aithe
Welcome To The Jungle
more
Any Given Sunday
Dahshat
Deva
Paying Guests
Badmash
Conan The Barbarian (Telugu)
Raaz 3
We're The Millers
Ammammagarillu
The Body
SEARCH MOVIES
Dissatisfied with the results? Report a problem or error, or add a listing.
ADVERTISEMENT
SHOUTBOX!
{{todo.name}}
{{todo.date}}
[
ip{{todo.ip}}
]
{{ todo.summary }}... expand »
{{ todo.text }} « collapse
First  |  Prev  |   1   2  3  {{current_page-1}}  {{current_page}}  {{current_page+1}}  {{last_page-2}}  {{last_page-1}}  {{last_page}}   |  Next  |  Last
{{todos[0].name}}

ADVERTISEMENT
This page was tagged for
kid number 150 telugu move
Khaidi No. 150 telugu movie
Khaidi No. 150 reviews
release date
Chiranjeevi, Kajal Agarwal
Follow @fullhyderabad
Follow fullhyd.com on
About Hyderabad
The Hyderabad Community
Improve fullhyd.com
More
Our Other Local Guides
Our other sites
© Copyright 1999-2009 LRR Technologies (Hyderabad), Pvt Ltd. All rights reserved. fullhyd, fullhyderabad, Welcome To The Neighbourhood are trademarks of LRR Technologies (Hyderabad) Pvt Ltd. The textual, graphic, audio and audiovisual material in this site is protected by copyright law. You may not copy, distribute, or use this material except as necessary for your personal, non-commercial use. Any trademarks are the properties of their respective owners. More on Hyderabad, India. Jobs in Hyderabad.