Once Upon A Time In Mumbai Dobaara Review 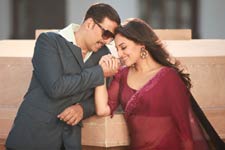 Swayamsrestha Kar / fullhyd.com
EDITOR RATING
5.0
Performances
Script
Music/Soundtrack
Visuals
6.0
5.0
6.0
7.0
Suggestions
Can watch again
No
Good for kids
No
Good for dates
Yes
Wait for OTT
No
There was a time when Hindi cinema idolised the "hero" - an epigram-mouthing, moustache-twirling, villain-bashing man, whose moral integrity and honesty was strong enough to bend iron. Then came films like Deewar (with Amitabh Bacchan as a firebrand rebel out to get everything that a hypocritical system denies him), Vastaav (with Sanjay Dutt immortalising the long-kurta-and-tilak-on-the-forehead look), and Company (with Ajay Devgn's smouldering portrayal of a ruthless underworld chieftain).

And just like that, Indian audiences were rooting for the "anti-heroes", the scheming gangsters, and the bhais. The transition was surprisingly seamless, and was also kind of heartening to behold. It meant that we, as a collective of cinema-goers, were finally learning to acknowledge, and to revel in, the greyer areas of the human psyche.

The Once Upon A Time In Mumbai kind of films have always played to such audience sensibilities. Every now and then, we do want our heroes to play the bad guys, because heavy doses of saint-like goodness can get nauseating after a while.

But then, Once Upon A Time... Dobara, while picking up the story where the earlier installment had left it, isn't as deserving of seetis and taalis as Ekta Kapoor wishes it were. Shoaib (Akshay Kumar), after having assassinated his mentor, Sultan Mirza, has become the kingpin of the underworld in Mumbai (or as he likes to call it - "B-a-m-b-a-i"). As we had seen in the last movie, the character still retains his insatiable ambition, and has proclaimed the whole of Mumbai as his own.

One day, he chances upon two street urchins, and impressed by their raapchik attitudes, takes them under his tutelage. 12 years later, the boys have grown up, and Aslam (Imran Khan) - a feisty young thing - is now Shoaib's favourite goon in Mumbai. Shoaib's rival Raawal (Mahesh Manjrekar, and by the way, did anyone notice the alliteration?) wants Shoaib dead, while the Mumbai police are, as usual, "hot on his trail".

Shoaib is merciless, unscrupulous, and formidably grim. He rarely utters a normal sentence throughout the movie, and it seems like all he ever read in his life was a bulky book of epigrams. He is not a romancer, but a ravisher of women.

Aslam is fiercely loyal to his boss, and in his spare time, goes around trying to get his bachpan-ka-yaar Dedth Tang (Pitobash Tripathy) together with the latter's girlfriend.

At this point, you're almost wishing that Sonakshi Sinha would appear on screen. Before Lootera, this sentence could have easily been interpreted as a sarcastic jibe. But not so this time.

When her character, Jasmine, a vivacious starlet from Kashmir, makes her surprisingly low-key entrance, you know that the Man Of (contraband, we're sure) Steel Shoaib and the fledgling Robin-esque Aslam are going to fall in love, and one of them is going to have his heart broken.

And to spice things up, Raawal is making his own plans, and the police are bumbling around in characteristic cluelessness.

Milan Luthria, as can be deduced from his earlier films (The Dirty Picture, Once Upon A Time In Mumbai and Taxi Number 9211), specialises in directing cinema that has been stripped off all overwhelming fluffiness. This time though, he has faltered. Not only does Once Upon A Time... Dobara appear pale when compared to its predecessor, it also makes a mess out of a compellingly powerful character - Shoaib. Reduced to clumsy one-liners, and a pair of sunglasses, the character even appears caricaturish in some scenes.

The film's set designers re-create the Mumbai of the late 1980s, and it is evident that the attention-to-details part has been taken care of. But most importantly, Ayananka Bose does some really impressive cinematography, and you get a chance to appreciate Mumbai in all its retro-chic, Technicolor glory.

The editing is mediocre though. There were several scenes (particularly a song-and-dance routine) that could have been left out.

The dialogues are soggy. No, really, they have none of the crispness or full-bodied appeal that the dialogues in films of this kind should have. What could have been a sensuous and racy story of two dons, and a ermm... lady, is instead reduced to the celluloid equivalent of one-bone-two-dogs.

Seriously, there is absolutely no chemistry in any of the pairings: Shoaib-Jasmine, Aslam-Jasmine, Shoaib-Aslam, Aslam - his motorcycle, Aslam - Dedh Tang, Shoaib - his slicked hair which looks like it was shampooed with oil... you get the drift.

Individually though, the performances don't disappoint... much. First off, we're acutely aware of the fact that Akshay Kumar could have killed it with this role, if only the writers had bothered to pen decent lines for him. The man oozes a deliciously devilish charisma on screen. The glasses were a big mistake, simply because of the fact that, without them, Kumar manages to woo us with his eyes, and the stark, hungry/angry look in them.

Imran Khan should really stop delivering dialogues like he's trying to be Harsha Boghle-after-a-mildly-interesting-cricket-match. Also, the side-burns and the moustache only serve to highlight the innocent, cherubic face beneath.

Sonakshi Sinha is believable as Jasmine, a naive (bothering on "dumb", but just) and starry-eyed aspiring actress. She has matured in terms of screen presence, and makes her sad mess of a character look good.

Overall, one of the few reasons you might want to catch Once Upon A Time... Dobara would be if you don't have tickets to the other films this weekend.
Share. Save. Connect.
Tweet
ONCE UPON A TIME... SNAPSHOT
ONCE UPON A TIME IN MUMBAI DOBAARA SNAPSHOT 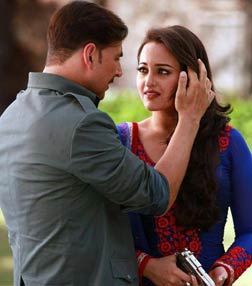 ADVERTISEMENT
This page was tagged for
Once Upon A Time In Mumbai Dobaara hindi movie
Once Upon A Time In Mumbai Dobaara reviews
release date
Akshay Kumar, Imran Khan
theatres list
Follow @fullhyderabad
Follow fullhyd.com on
About Hyderabad
The Hyderabad Community
Improve fullhyd.com
More
Our Other Local Guides
Our other sites
© Copyright 1999-2009 LRR Technologies (Hyderabad), Pvt Ltd. All rights reserved. fullhyd, fullhyderabad, Welcome To The Neighbourhood are trademarks of LRR Technologies (Hyderabad) Pvt Ltd. The textual, graphic, audio and audiovisual material in this site is protected by copyright law. You may not copy, distribute, or use this material except as necessary for your personal, non-commercial use. Any trademarks are the properties of their respective owners. More on Hyderabad, India. Jobs in Hyderabad.