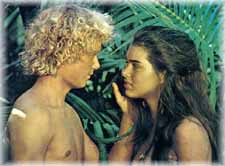 EDITOR RATING
5.0
Performances
Script
Music/Soundtrack
Visuals
NA
NA
NA
NA
Suggestions
Can watch again
NA
Good for kids
NA
Good for dates
NA
Wait for OTT
NA
This one has been released and re-released so many times, it's a wonder that there are people out there who are still ready to go and see it. At least two generations of Hyderabadis have patronized this movie, but it keeps coming back. But when compared to the other movies out there, one must admit that this particular one is a bit of a reprieve. There is a certain coherence and an attempt at making a proper film out of it. It does flounder a lot, though, and at times ends up looking like a National Geographic documentary. Only, with Brooke Shields in it!

Made in 1979 (now that is a long way back!), this movie has an incredibly young looking Brooke Shields in it paired with an equally young Christopher Atkin. They are two cousins from the prim 'n' propah Boston society of the early 1900s, living as castaways on a deserted island where they've landed up following a shipwreck. With an Irish sailor to guide them in their early years (the sailor dies later on), the two grow up without education or social pressures.

The Blue Lagoon tries to analyze such a scenario. Originally a book written by one H de Vere Stacpoole, the movie is Hollywood's second effort to can it on film. The focus drifts quite a bit as the director's dilemma becomes obvious - whether to capture Fiji's natural beauty or to exploit the openings in the script and show the chemistry between the two young actors. His confusion does him in, and the movie loses track of the story - not that there is much of a story!

Brooke Shields is amazingly pretty as Emmeline, but is decidedly too young for the role she plays. She acts well though. Christopher Atkins as Richard, looks awkward and broody most of the time. The movie has an overall raw feel to it, which spoils the sensitive topic that it deals with in the first place. There is a brave attempt at experimentation and at trying to portray scenes where the two are confronted by strange phenomena like puberty, physical attraction, sex and even pregnancy. But the scenes are about as convincing as the games kids play when they imitate grownups.

But the audience was not so analytical, and was pretty happy at the amount of exposure Brooke Shields gets in the movie... literally!
Share. Save. Connect.
Tweet
THE BLUE LAGOON (HINDI) SNAPSHOT