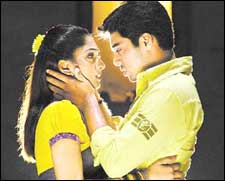 EDITOR RATING
3.0
Performances
Script
Music/Soundtrack
Visuals
NA
NA
NA
NA
Suggestions
Can watch again
NA
Good for kids
NA
Good for dates
NA
Wait for OTT
NA
Navdeep has been around for a while now without a single hit, and it's surprising how. He's a fairly good actor, but we all know Tollywood does not operate that way - it's only family power here. Venkatesh, Nagarjuna, Balakrishna, Mahesh Babu, Prabhas, Allu Arjun, NTR Jr, Pavan Kalyan, Sumanth, Nitin, Gopichand… every lead actor, save Ravi Teja, with any standing today is about family. The industry's steely gates are remorselessly inarticulate to many talented aspirants.

History is against Navdeep in more intransigent ways than that, too. He's too small of build to be a popular hero at any time. He'll probably eventually fill out the shirts, but there is still the height factor - there's never been a Telugu popular hero who's been less than about 5' 10", save perhaps for ANR in the ancient times. Navdeep has only Aamir Khan to draw hope from. But then Aamir Khan had family. Ah, cruel destiny.

Sitakoka Chilaka is yet another example of what happens if you do not have a family that can line up for you big banners and the associated talented crews even in your initial days when you do not deserve them on your own standing. Navdeep has to make do with writers with limited bandwidth to think, low budgets on visual glitz, and non-existent publicity (did you even know there was a film like this releasing?). The result, in a business which is primarily about creativity, is disasters like this that won't be footnotes even in the makers' own autobiographies.

So is the romance then in the league of a Geetanjali or a Love Story, with each scene carefully crafted to be an umbilical part of a completely visualized film? That depends on your interpretation of the word "mental". But, anyway, the story: Srinivas (Navdeep) is a student of a college in rural Andhra who hates women and sex. One day he witnesses a couple making love, and that makes him a normal man - i. e. crazy for sex.

He starts lusting after a classmate and friend he was ignoring till then, Lakshmi (Sheela), who's already kinda soft on him. But he realizes that trying to get physical may lead to big problems, and so decides to just love her, and keeps doing that until the cell in your watch runs out. Yes, by now, it's 2 hours and 10 minutes into the film. No kidding.

Then Lakshmi's evil brother-in-law sister's husband Sitapati (Pruthvi) tries to rape her, and gets jailed. Lakshmi and Srinivas then finish their studies, and are about to reunite to get married, when Sitapati returns and tries to kill them, but gets killed. And the film ends.

The film seems like the director got stuck with the romance that was going nowhere since the pair were anyway in love for a long time, and suddenly decided to end it. The movie takes 150 minutes, and for the last 50 minutes, you are constantly looking at your watch. However, the performances are all good, and a song "Kanulu Kanulu" will perhaps make the charts, but what will make this film last its 3 weeks is the comedy involving Dharmavarapu, Krishna Bhagawan and the rest of that crew.

Watch this one only if you need to sit in an empty theater for something.
Share. Save. Connect.
Tweet
SITAKOKA CHILUKA SNAPSHOT

ADVERTISEMENT
This page was tagged for
seethakoka chiluka review and rating
TELUGU MOVIES SITA KOKA CHILUKA
Sitakoka Chiluka telugu movie
Sitakoka Chiluka reviews
release date
Follow @fullhyderabad
Follow fullhyd.com on
About Hyderabad
The Hyderabad Community
Improve fullhyd.com
More
Our Other Local Guides
Our other sites
© Copyright 1999-2009 LRR Technologies (Hyderabad), Pvt Ltd. All rights reserved. fullhyd, fullhyderabad, Welcome To The Neighbourhood are trademarks of LRR Technologies (Hyderabad) Pvt Ltd. The textual, graphic, audio and audiovisual material in this site is protected by copyright law. You may not copy, distribute, or use this material except as necessary for your personal, non-commercial use. Any trademarks are the properties of their respective owners. More on Hyderabad, India. Jobs in Hyderabad.