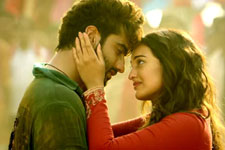 Nupur Barua / fullhyd.com
EDITOR RATING
5.0
Performances
Script
Music/Soundtrack
Visuals
6.0
4.0
5.0
6.0
Suggestions
Can watch again
No
Good for kids
No
Good for dates
Yes
Wait for OTT
Yes
Tevar literally means attitude, and the movie is all about that of the hero. A remake of the 2003 Telugu film Okkadu, Tevar is also all about the attitude of the villain. And when the hero and the villain clash, their chemistry is worth taking note of, with the love angle being pretty tame in comparison.

Ghanshyam Shukla, a.k.a. Pintu/Pinte/Pintoo (Arjun Kapoor), is the son of SP Shukla (Raj Babbar) of Agra. He is his the apple of the eye of his mother (Deepti Naval), and she saves him from his father's wrath whenever necessary. Pintu takes advantage and flits between Mathura and Agra whenever he can, and his father is quite fed up with his antics.

A self-proclaimed Superman and Salman fan, as is emphasised in a song, Pintu is renown for two things - his kabaddi skills, and his intolerance towards men who harass women. While the former earns him fame and popularity, the latter lands him in trouble with the most dangerous man of the area, Bahubali Gajinder Singh (Manoj Bajpayee), who is also the brother of the Home Minister (Rajesh Sharma).

Gajinder falls in love with Radhika (Sonakshi Sinha), a lecturer in a college in Mathura and a dancer. He decides to marry her. When she spurns him, he makes her life miserable. Her parents try to sneak her out of the city, but Gajinder discovers her plans to flee. As he drags her away from the bus terminus, Pintu spots them, and without thinking, beats up Gajinder.

It is only when he is chased by jeeploads of hooligans that Pintu realises what he has done, and, more importantly, to whom. Radhika has no option but to flee with him, and this results in a chase that lasts the rest of the movie - from Mathura to Agra and back again. Somewhere down the road, Radhika falls in love with her saviour, but she knows that she has to leave the country to stop the bloodshed.

The dialogues show some spark here and there, and there is a sincere attempt to be funny, but everything falls flat after an hour or so. Especially because you know exactly what the content and context of each dialogue is going to be, before the character opens his or her mouth. Another aspect that the director pays no attention to is the romantic angle. The story is basically a triangle, of sorts, but the inevitable romance between Pintu and Radhika is abrupt and unsatisfying. You are not sure why Radhika prefers Pintu over Gajinder.

The entire movie becomes a chase post-interval, and there are a few chases in the first half as well. As the hero and heroine run between the dingy alleys of either Mathura or Agra, you know of the dangers they are going to face, but you just cannot feel the threat. Towards the end, when the hero's life is potentially in danger, the "true love" angle seems rather contrived. And then there are quite a few close-ups of eyes - for the main characters - especially when one has delivered a heavy dialogue. Radhika's eyes speak more than she does, for instance.

The hero's introduction, which begins with kabaddi, also seems convoluted, especially since he is never shown playing it again. There are no specific plot points, and the screenplay takes forever to get to the crux of the story. The climax stretches on for a while, too, and you lose interest very soon after the interval. The resolution is rather mild, for an action movie - or maybe it seems that way because you have seen it all before.

In short, Tevar offers nothing new in terms of story.

Arjun Kapoor has a long way to go to be considered a serious actor. As Pintu, he comes across as charming and manipulative, but he falters whenever he has to act innocent. He seems most uncomfortable when he has to look happy. The angry young man bit suits him. Sonakshi Sinha, as is now the norm with her, does not have much to do in the movie. She displays her ability to exhibit various expressions, but that is about it. Her dance is impressive. Raj Babbar is a surprise, and a pleasure to watch, in this otherwise loud movie. Deepti Naval is wasted, as is Rajesh Sharma.

The real hero of the film, in terms of acting, is Manoj Bajpayee, of course. The inanities in the plot stun him now and again, but he plods on valiantly. He is the only actor who evokes feelings (in this case, of hatred) in you. From the ridiculous to the menacing - he manages them all, without blinking. He is the reason you should buy a ticket to watch this one.

The only way to identify whether a sequence is set in Mathura or Agra is by noting the presence of the Taj Mahal in the background. When it comes to the running around, you are never sure quite where they are, although the dialogues will tell you. The two cities may look alike, but the production design team has done a commendable job of presenting the depressing spaces of both. There is an abundance of colours that you identify with northern India, and even the residences shown in the movie look authentic and impressive.

The costume department is relatively slipshod, but Manoj Bajpayee's clothes are suitably gaudy. The camera work picks up during the action sequences, with plenty of high speed shots. The cinematographer includes some impressive angles throughout the movie, especially during the music videos.

There are just too many songs in the film, and the story does not move much till after the third one. The Superman song is entertaining, but the rest do not leave much of an impact, except perhaps Jogiyan. The Radha Nachegi video is visually attractive, though, especially for Sonakshi's dance. At more than two and a half hours, the movie is rather tedious, and deserved better editing.

As we mentioned, Manoj Bajpayee's act should be what attracts you to this film. That, and some of the action sequences. If it were not such a lengthy fare, Tevar could have been an enjoyable movie, despite the predictable and slightly outdated screenplay.
Share. Save. Connect.
Tweet
TEVAR SNAPSHOT 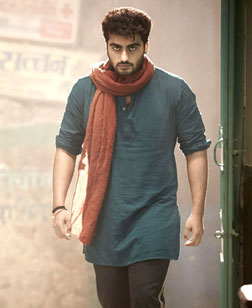 ADVERTISEMENT
This page was tagged for
Tevar hindi movie
Tevar reviews
release date
Arjun Kapoor, Sonakshi Sinha
theatres list
Follow @fullhyderabad
Follow fullhyd.com on
About Hyderabad
The Hyderabad Community
Improve fullhyd.com
More
Our Other Local Guides
Our other sites
© Copyright 1999-2009 LRR Technologies (Hyderabad), Pvt Ltd. All rights reserved. fullhyd, fullhyderabad, Welcome To The Neighbourhood are trademarks of LRR Technologies (Hyderabad) Pvt Ltd. The textual, graphic, audio and audiovisual material in this site is protected by copyright law. You may not copy, distribute, or use this material except as necessary for your personal, non-commercial use. Any trademarks are the properties of their respective owners. More on Hyderabad, India. Jobs in Hyderabad.