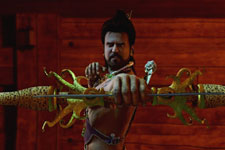 Kritika Deval / fullhyd.com
EDITOR RATING
5.5
Performances
Script
Music/Soundtrack
Visuals
6.5
5.5
7.5
5.0
Suggestions
Can watch again
No
Good for kids
No
Good for dates
No
Wait for OTT
Yes
Okay, so India needs a firm foray into the animation sector. We're all agreed on that. A lot of people who work on international animated blockbusters are Indian, and, currently at least, India's entire USP on an international scale boils down to "good with computers". So it is doubly baffling when huge stars and bigger budgets are thrown at CGI projects that look like the comparative equivalent of a child's drawings proudly displayed on a refrigerator.

Take, for instance, Vikramasimha and its much touted photo-realistic motion-capture graphics. Despite a few competent-enough sequences, most of the film features plastic faces and puppet-like movements. This is even sadder considering that the film's focus on the graphics goes to such an extent as to completely sideline every other aspect.

Except, of course, Mr. Rajini.

Here's where the story comes in. Rana (Rajinikanth) is the chief of army at Kalingapuram, which is under the rule of Raja Mahendra (Jackie Shroff). This is where he begins his military exploits (cue in 300-esque bloodshed and flying body parts). Somewhere along the line, he comes across Vandana Devi (Deepika Padukone), daughter of nemesis Ugra Sinha (Nasser). The rest of the film goes pretty much the same as the beginning, and there really isn't much reason for any other character to exist.

The focus on graphics and Rajinikanth Ecuador eclipse the plot and characterization so far that even the plot itself is a stock character. Every character exists to cue Rana into action, and every action exists so we can see him act. It's a good thing then that Rajinikanth has the ability to make films worthwhile for fans despite all odds.

The dialogues are mediocre except for those rare moments tailor-made for Rajinikanth, whose character does the man justice - further proof of the film's dashed potential.

The soundtrack is apt as only Rehman's music can be, seamlessly blending into the story. The experience of the songs is marred by clumsy visuals, however.

All in all, it is an experience, definitely, but not one for those who aren't die-hards fans of Rajinikanth, or those whose dedication to Indian cinema and its progress hasn't heightened their tolerance for way less than great story-telling.
Share. Save. Connect.
Tweet
VIKRAMASIMHA - THE LEGEND SNAPSHOT 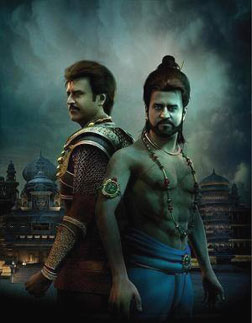 ADVERTISEMENT
This page was tagged for
Vikramasimha - The Legend telugu movie
Vikramasimha - The Legend reviews
release date
Rajinikanth, Deepika Padukone
theatres list
Follow @fullhyderabad
Follow fullhyd.com on
About Hyderabad
The Hyderabad Community
Improve fullhyd.com
More
Our Other Local Guides
Our other sites
© Copyright 1999-2009 LRR Technologies (Hyderabad), Pvt Ltd. All rights reserved. fullhyd, fullhyderabad, Welcome To The Neighbourhood are trademarks of LRR Technologies (Hyderabad) Pvt Ltd. The textual, graphic, audio and audiovisual material in this site is protected by copyright law. You may not copy, distribute, or use this material except as necessary for your personal, non-commercial use. Any trademarks are the properties of their respective owners. More on Hyderabad, India. Jobs in Hyderabad.