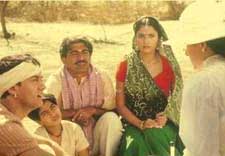 Bhargav Shastry / fullhyd.com
EDITOR RATING
8.0
Performances
Script
Music/Soundtrack
Visuals
NA
NA
NA
NA
Suggestions
Can watch again
NA
Good for kids
NA
Good for dates
NA
Wait to rent it
NA
June 15, 2001, will go down as a memorable day in Indian cinema, when history was created both on- and off-screen. It was a day when two honest blokes - one a director whose profile read "a B-grade TV actor and (mis)director of two flops", and the other a producer-actor whose obsession with perfectionism has always been laughed off by everybody as bordering on the pathological - finally released to the world a dream of theirs that was being woven for 5 years.

People had written off the dream before even watching it, because it did not have any of the stereotypes of Indian cinema to sustain it. No puppy love, no foreign locales, no Archiesque Riverdales, no stars except for the lead actor and a voice over by a legend, no hunks, no bombshells. Instead, it was an oddball film set in an obscure year of 1893. It was about a bunch of villagers waging a bloodless battle against the British. Even history was against it as such period films never interested the average Indian viewer.

Meanwhile, the two blokes, along with the 300-odd-film crew, were silently waiting for the Day of Judgment. And they have done it.

The reason that Lagaan is being hailed as classic here is that it is a perfect combination of several factors that make a classic. Never could the front end (read technical excellence) and the back end (read belief) complement each other so well. An offbeat idea being given such magnificent shape is sure to write history.

Put simply, Lagaan is the story of the victory of the human will. The story is set during the British Raj in a remote village called Champaner somewhere in UP, where the villagers are as ordinary as they can be. They give a portion of their agricultural reap as tax to the British under the order of their king as a tax (the lagaan).

This becomes increasingly difficult for them as the village is frequently drought-stricken. And one fine day the Britishers suddenly decide to double the tax. When the villagers go to the British camp to protest this measure, the village hero Bhuvan (Aamir Khan) sees some Britishers playing cricket, and laughs it off as just another version of gulli-danda.

The leader of the British troops, Cap Russell (Paul Blackthorne), then challenges Bhuvan that if the villagers manage to defeat them in this game, they will not have to pay any tax for three years. But if they lose, the tax will be trebled.

Bhuvan accepts this outrageous proposal, much to the chagrin of the villagers who haven't the slightest familiarity with the game. The rest of the film deals with how Bhuvan motivates the villagers into building a team to defeat the Britishers.

All the eleven characters constituting the team, played by the likes of Raghuveer Yadav, Akhilendra Mishra and Aditya Lakhai, have given tremendous performances. Gracy Singh plays Gauri, Bhuvan's love interest, and Rachel Shelly plays Elizabeth, Russell's sister, who teaches the villagers the basics of the game (in which process she also falls for Bhuvan). Both give fine performances.

The film has perhaps the longest climax in Indian cinema and yet one of the most gripping ones, and that is the cricket match between the teams.

Lagaan excels in every department of filmmaking, and especially in art direction, costumes, music, choreography and, most importantly, the editing. The 3 hours and 42 minutes just pass by without the film losing grip of the viewers' attention. Perhaps it needed that much time to make itself timeless.

The never-say-die spirit of Bhuvan is actually a reflection of what Aamir has been with this effort. Ashutosh Gowarikar affirms the fact that flops do not define a director's potential. And now one thing is for certain. Apart from making room for itself in the Bollywood hall of fame and apart from sweeping all accolades, Lagaan is also sure to create some box-office records. The population has been quite vociferous.

This film's success can be summed up by what Bhuvan says in the film:

ADVERTISEMENT
This page was tagged for
summary of laggan
lagaan movie review in hindi
lagan movie summary in hindi
summary of movie lagaan
summary of movie laggan
Follow @fullhyderabad
Follow fullhyd.com on
About Hyderabad
The Hyderabad Community
Improve fullhyd.com
More
Our Other Local Guides
Our other sites
© Copyright 1999-2009 LRR Technologies (Hyderabad), Pvt Ltd. All rights reserved. fullhyd, fullhyderabad, Welcome To The Neighbourhood are trademarks of LRR Technologies (Hyderabad) Pvt Ltd. The textual, graphic, audio and audiovisual material in this site is protected by copyright law. You may not copy, distribute, or use this material except as necessary for your personal, non-commercial use. Any trademarks are the properties of their respective owners. More on Hyderabad, India. Jobs in Hyderabad.