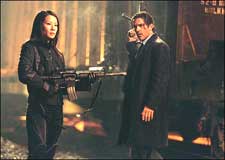 Charisma Murari / fullhyd.com
EDITOR RATING
1.0
Performances
Script
Music/Soundtrack
Visuals
NA
NA
NA
NA
Suggestions
Can watch again
NA
Good for kids
NA
Good for dates
NA
Wait to rent it
NA
Ballistic: Ecks Vs Sever is a mystery. Not the movie, just the name. It makes as much sense after watching the movie as it does before watching it.

Ballistic is a dumb action movie. Actually, in the genre of dumb action movies, this one is a dumb action movie. The mindless violence begins right at the start when Sever (Lucy Liu), a rogue DIA agent, abducts Micheal, the son of DIA's chief honcho, Robert Gantt (Gregg Henry). Something and all happens, and Ecks (Antonio Banderas) comes in on the whole shannigan when he learns that his wife, who he believed was dead, was well... not. Gant is trying to get his son back from Sever, trying to kill Ecks as an aside, and trying (painfully hard) to look cool.

From this point on, Ballistic becomes eckstremely bad. In fact it gives you the yeck feeling in the deepest pit of your stomach. Barely 10 minutes into it and you know that the 'Vs' in the name is quite pointless. A little more time and you know that expecting cool/breathtaking action sequences would be, too. Unless watching Lucy Liu kick butt with the grace of hopping sparrow (and looking like one) is your idea of action. Really, she just about manages to not fall flat on her beak, er... nose.

Ecks and Sever suddenly, in one lightening instant, go from grabbing at each others necks to saving each others asses, leaving you hoping it was the other way round, because, by now, you will take any sorta action. Well, in defence of the movie, everything in it moves really fast. Except the bullets that Sever dodges, all in a day's work.

To say that Ballistic has a story would be a gross exaggeration and an act that even its publicists did not indulge in. The whole deal is about 15 car pileups, and the plot has holes that are big enough to allow a few 15 car pileups through. There is, however, this little thing which is a nanotechnology-robot that can be darted into the bloodstream and detonated at the press of a button from a remote-controlled device. This constitutes the excuse for 1 hour 31 minutes of mind-numbing nothing.

Ballistic probably deserved a few Razzies the year it hit screens in the West, 2 years ago. But its singular most outstanding achievement is this - it is the only movie which got called one of the worst movies of the year, in two different years!
Share. Save. Connect.
Tweet
BALLISTIC: ECKS VS. SEVER SNAPSHOT

ADVERTISEMENT
This page was tagged for
Ballistic: Ecks vs. Sever english movie
Ballistic: Ecks vs. Sever reviews
release date
Antonio Banderas, Lucy Liu
theatres list
Follow @fullhyderabad
Follow fullhyd.com on
About Hyderabad
The Hyderabad Community
Improve fullhyd.com
More
Our Other Local Guides
Our other sites
© Copyright 1999-2009 LRR Technologies (Hyderabad), Pvt Ltd. All rights reserved. fullhyd, fullhyderabad, Welcome To The Neighbourhood are trademarks of LRR Technologies (Hyderabad) Pvt Ltd. The textual, graphic, audio and audiovisual material in this site is protected by copyright law. You may not copy, distribute, or use this material except as necessary for your personal, non-commercial use. Any trademarks are the properties of their respective owners. More on Hyderabad, India. Jobs in Hyderabad.