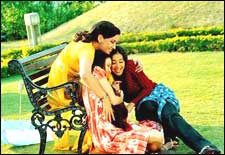 Sure, Tehzeeb has some sparks of talent - but they're buried under so much crap that it's like trying to find hay in a needle stack, only more painful. You'd think everyone in this movie (including, sadly A R Rahman) just decided to jettison art and happily sail unencumbered into a gale of melodrama, punctuated with item numbers (for the masses who didn't show up).

Shabana Azmi as seen from her young daughter's (Tehzeeb, Baby Urmila) eyes is an over-ambitious singer who has no time for her family. Rishi Kapoor (her husband), on the other hand, has all the time in the world on account of his being unemployed and a certified loser. Baby Urmila is mad at Mommy for not being around enough, and as a direct result, loves Daddy more.

All this, by the way, is portrayed to an audience experiencing major post-purchase dissonance, through a series of shamelessly over-simplified sequences at the opening. A shredder could chomp up the script with more subtlety. And better reason. 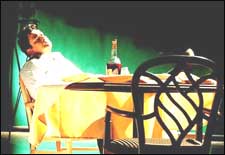 One night Baby Urmila witnesses her father's death at her mother's hands. Petrified as she is, she hides the smoking barrel, and Shabana who is charged with murder gets out scot-free. One of the great mysteries of this film is why a daughter who thinks her mother killed her father seems to show only some token resentment toward mother in question. Sort of like, "You killed my father, how could you? Pass me the butter please, thank you. Yeah, like I was saying, how could you?"

Anyway, so Tehzeeb grows up despising her mom, not just for killing her dad but also for abandoning her mentally challenged sister played by Diya Mirza. Mirza goes from mildly annoying to fingernails-on-blackboard annoying, with consummate ease.

Tehzeeb takes her sister in from a private hospital to stay with her and her husband, Arjun Rampal, who for the first half of the movie has only one thought on his mind, and for the rest none at all. And he's one of the better actors in this film. And before we forget (this is perfectly possible, maybe even desirable), there's Diana Hayden with an accent so overdone, she requires subtitles. 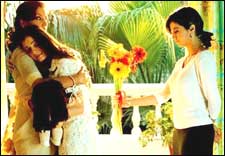 So Tehzeeb and co are a happy family, till Mommy dearest decides to visit a daughter whose marriage she totally disapproves of, and whose company she hasn't sought in a long time. After a few verbal skirmishes and guilt-tripping (nothing says 'welcome home' better), Tehzeeb confronts her mother over long-buried hurts. And this is perhaps the best 60 seconds in the film - the dialogues are effective, and the duo whip up enough venom to create an entirely believable mother-daughter scene.

Then things get strange.

After the intense and painful encounter, Urmila makes up to her mom the next morning with a bunch of flowers and gets her to stay on till the little sister's birthday. No mention is ever made again of the venom-spewing episode, and the mother and daughters hang out and have a great time. All this while you're thinking, "What'd I just miss here?" Nothing, if you didn't make it for this film.

After some needless comedy scenes (you can tell they're the funny bits, by the complete lack of laughter in the hall) and one horrible song-and-dance, Diya Mirza shoots herself (don't blame her). She doesn't die, though, and while she lies in the hospital bed fighting for her life, her mother and sister go at it like cats.

Finally, Shabana tells all - she didn't kill her husband, he shot himself. All she did after was take the revolver from him and wave it about in an incriminating manner. Everything's cleared up, Diya Mirza regains consciousness (she was unconscious?), and they're one happy family again, till the mother cops it.

ADVERTISEMENT
This page was tagged for
Tehzeeb hindi movie
Tehzeeb reviews
release date
Urmila Matondkar, Shabana Azmi
theatres list
Follow @fullhyderabad
Follow fullhyd.com on
About Hyderabad
The Hyderabad Community
Improve fullhyd.com
More
Our Other Local Guides
Our other sites
© Copyright 1999-2009 LRR Technologies (Hyderabad), Pvt Ltd. All rights reserved. fullhyd, fullhyderabad, Welcome To The Neighbourhood are trademarks of LRR Technologies (Hyderabad) Pvt Ltd. The textual, graphic, audio and audiovisual material in this site is protected by copyright law. You may not copy, distribute, or use this material except as necessary for your personal, non-commercial use. Any trademarks are the properties of their respective owners. More on Hyderabad, India. Jobs in Hyderabad.