'Viplavam' movies have long since gained the reputation of being mundane, distasteful and small-minded in a very artificial way. But not this one. Bheemudu is mundane, distasteful and small minded in a very real way. The Marlon Brando of "revolutionary movies" has churned out yet another addition to his long & illustrious directory of films. This one goes something like this:

Rayudu (Jayprakash) is this landlord whose only ambition in life is to prove his place in (in)human evolution, as the cross between Lord Curzon and a black Hannibal Lecter. And as usual, Rayudu, belonging to an upper caste, HAS to rub off this malignity onto all of his clan.

Bheemudu (Narayana Murthy) is a farmer whose only purpose of existence is, likely, contorting his facial skin while rapidly twitching his eyebrows up and down. But that's only 3/4th of what he's capable of! The other 1/4th would involve hogging, hamming, killing, singing and precisely squeezing visible sponges, soaked in red colour, over the wounds of his dying comrades to give the gory effect of bloodshed.

Anyway, our hero in his regular philanthropic errands rescues Aruna (Renuka) twice and twitches his face two million times in between. Aruna, tremendously impressed by this, at once confesses her tender love to him. But Aruna's dad, Raaghavayya (Raghunath), had already planned her future with the rich Rayudu. When he learns of his daughter's courtship with Bheemudu, he's obviously upset about his daughter for choosing an old, hairy, fat dalit over an old, hairy, fat homicidal upper caste guy. So in order to teach the lower caste schmucks to stay away from the 'classy' ladies, Raaghavayya manhandles Bheemudu's sister and a coupla friends. 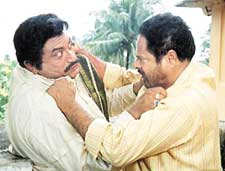 Bheemudu, true to his name, retaliates, further pissing off the already cheesed off zamindars. The zamindars then decide to carnage the entire colony of dalits, and what follows next is perhaps the most appalling attempt at genocide ever caught on reel. This massacre however is not enough for the revolt by the dalits as yet.

A commissioner set up to enquire into the killings is also allowed to be murdered. How else can they set up a 'You push the dalits too far and nobody's on their side especially the police and government' shtick in every one of their movies? So the revolution under Bheemudu's leadership begins and ends the lives of all them blood sucking policemen & Zamindaars. Rayudu dies gracefully in a 'mushti yuddham' battle with Bheemudu of course. 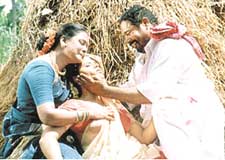 The production value of this movie is better than those of some the earlier flicks by Narayana Murthy. Excessive powder on the actors' faces is proof enough of this. The lone bright spot in the movie however is music by Vandemaataram Sreenivas - he's given some decent folk tunes. But that's not at all enough to help the movie out of the dumps.

Narayan Murthy is at his twitchy best as usual. But his eyebrows will not make Bheemudu another Cheemala Dandu or Yerra Sainyam. The disappointment however comes in the form of Jayprakash. We all loved you in Samarasimha Reddy & Anandam man, what'd you do this for?

ADVERTISEMENT
This page was tagged for
Bheemudu telugu movie
Bheemudu reviews
release date
Narayana Murthy, Jayprakash
theatres list
Follow @fullhyderabad
Follow fullhyd.com on
About Hyderabad
The Hyderabad Community
Improve fullhyd.com
More
Our Other Local Guides
Our other sites
© Copyright 1999-2009 LRR Technologies (Hyderabad), Pvt Ltd. All rights reserved. fullhyd, fullhyderabad, Welcome To The Neighbourhood are trademarks of LRR Technologies (Hyderabad) Pvt Ltd. The textual, graphic, audio and audiovisual material in this site is protected by copyright law. You may not copy, distribute, or use this material except as necessary for your personal, non-commercial use. Any trademarks are the properties of their respective owners. More on Hyderabad, India. Jobs in Hyderabad.