Rohit Murari / fullhyd.com
EDITOR RATING
1.0
Performances
Script
Music/Soundtrack
Visuals
NA
NA
NA
NA
Suggestions
Can watch again
NA
Good for kids
NA
Good for dates
NA
Wait for OTT
NA
There is this story doing the rounds about 'Mumbai Matinee'. It seems the script was written for a play and directly, without any changes, used in the movie. We disagree. Playwrights are sensible people. 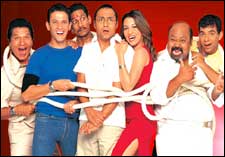 All publicity posters advertise the film as a magical story of a 32-year-old virgin. Therein lies your difference between the product and the sales demo. What could be so exciting about a man who is obsessed with sex enough to make a movie about but not enough to, ahem, take the matters in his own hands, so to speak?

Debashish Chatterjee (Rahul Bose) is obsessed with sex. He is frustrated. He is gung-ho over losing his virginity. He thinks he is the only one in the fray. Hey, wake up and smell the coffee! This is India where most unmarried people, and some married ones too, are VIRGINS. Here, we have the luxury of falling back on our family structure to help us find a 'partner' in the form of a spouse when the 'going gets tough'. We do not live in the world of Ally McBeal where our independence comes at the price of being alone, lonely, depressed, and getting ourselves a shrink and the services of a dating agency. 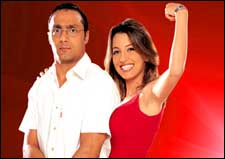 The film blows the issue of his virginity out of all conceivable proportion, so much so that an impression is created that it is a matter of graver importance than that of life and death. Characters keep coming and going, all with the intention of taking a dig at Debu's virginity. Every character has been etched with one purpose, and one purpose alone - to test the threshold of your endurance. 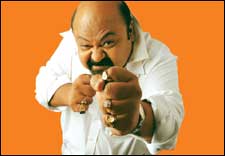 By this time, you must be wondering as to when I would tell you the story of the film. Well, if the film had any, I would have. Trust me. If this is what we get in the name of alternate or parallel or experimental cinema, give me the Barjatyas and the David Dhawans any day.

And what's with Rahul Bose? He stutters throughout the film, and generally looks constipated. Perizaad tries hard to breathe some freshness into the film, but Bose very successfully neutralises her efforts. The scores of other actors look disinterested, but considering how Bose 'acted' in the film, I do not blame them.

ADVERTISEMENT
This page was tagged for
Mumbai Matinee hindi movie
Mumbai Matinee reviews
release date
Rahul Bose, Perizaad Zorabian
theatres list
Follow @fullhyderabad
Follow fullhyd.com on
About Hyderabad
The Hyderabad Community
Improve fullhyd.com
More
Our Other Local Guides
Our other sites
© Copyright 1999-2009 LRR Technologies (Hyderabad), Pvt Ltd. All rights reserved. fullhyd, fullhyderabad, Welcome To The Neighbourhood are trademarks of LRR Technologies (Hyderabad) Pvt Ltd. The textual, graphic, audio and audiovisual material in this site is protected by copyright law. You may not copy, distribute, or use this material except as necessary for your personal, non-commercial use. Any trademarks are the properties of their respective owners. More on Hyderabad, India. Jobs in Hyderabad.