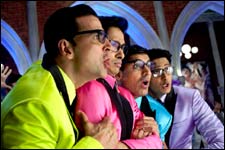 Samrat Sharma / fullhyd.com
EDITOR RATING
5.0
Performances
Script
Music/Soundtrack
Visuals
4.5
1.0
5.0
7.0
Suggestions
Can watch again
No
Good for kids
No
Good for dates
No
Wait for OTT
Yes
Sajid Khan is a dangerous man. Not content with making one of the most idiotic, and unfunny films ever to release, he ensures he completely destroys any nostalgia you had for Rishi and Randhir Kapoor sharing screen space. In fact Housefull 2 is so uniformly bad, that simply the marketing clout it has received makes Sajid Khan the worst kind of Pied Piper.

Almost every single actor in the movie is terrible, every joke is trite and unfunny, and every attempt at drama is utterly inept and boring. When film school students are given a class in what mistakes to avoid, this movie will be the entire curriculum.

The problem is that it drips of money - the production values are top notch. Hiring a good location scout and a competent cinematographer, and providing them with money for set design and expensive film was the best thing Sajid Nadiadwala could do for the director. That is it is completely squandered on a movie that fails to be entertaining is completely Sajid Khan's fault.

The actors seems to have a competition going on amongst themselves to be the worst thing about the film. There isn't a clear winner, as all 4 of the lead women are uniformly terrible, though Zarine Khan's marriage-obsessed whiny kid act does have an edge in how boring and utterly tiring it is. Not that Jacqueline, Asin or Shazahn make any effort to do anything worthwhile.

This could have been due to the combined double-whammy of poor writing and lack of direction, but the leading men who are written to drive the plot, such as it is, forward, and given a lot of screen time, are equally bad. Shreyas Talpade has succeded in making me question the earlier days when I thought he was a good actor. John Abraham never made any such pretensions, but, by God, does he look bored being in this movie.

Akshay is better - simply because he is Akshay. He takes his terrible lines, his poorly-written character and completely in-bad-taste jokes, and rolls with all this shite like a champion. I would have walked out were it not for him.

Ritesh has made a living out of his limited comic timing, and he sticks to it. He doesn't fare any better than the rest of the cast, but he doesn't grate as badly either.

The supporting cast is worse, obviously, with it being no easy task to single out one or a few for being terrible. God, I wish I hadn't seen Rishi and Randhir do this together.

As 4 fathers, 4 daughters and 4 prospective grooms living in the same mansion, the burgeoning cast is added to with a multitude of item number dancers and comedians of questionable quality, none of whom does a single thing to elevate the quality of the movie.

Despite the cast's uniform failure to do something worthwhile, it is the poor writing and the hackneyed directing that must take the blame for this debacle. I appreciate a good low-brow comedy, and all of us can take the time to laugh at a well-done crass joke. This isn't that - this film is one massive joke on us and our hard-earned money. This is a film that expects us to fork over money for tasteless and offensive humour with nothing funny to redeem it, and expects us to be thankful for it.

It takes a supremely arrogant man to not even make an effort to make his film, and expect us to be entertained. Yet, such is the position we find ourselves in. Avoid Housefull 2 at all costs, unless you want the egos involved in the making of this film to bloat further and next year find yourself paying for the privilege of being slapped by them.
Share. Save. Connect.
Tweet
HOUSEFULL 2 SNAPSHOT 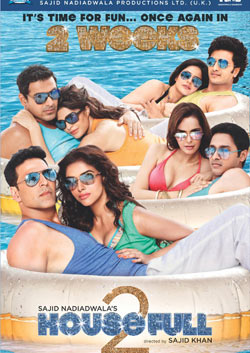 ADVERTISEMENT
This page was tagged for
www.movies.fullhyderabad.com
Housefull 2 hindi movie
Housefull 2 reviews
release date
Akshay Kumar, Asin
Follow @fullhyderabad
Follow fullhyd.com on
About Hyderabad
The Hyderabad Community
Improve fullhyd.com
More
Our Other Local Guides
Our other sites
© Copyright 1999-2009 LRR Technologies (Hyderabad), Pvt Ltd. All rights reserved. fullhyd, fullhyderabad, Welcome To The Neighbourhood are trademarks of LRR Technologies (Hyderabad) Pvt Ltd. The textual, graphic, audio and audiovisual material in this site is protected by copyright law. You may not copy, distribute, or use this material except as necessary for your personal, non-commercial use. Any trademarks are the properties of their respective owners. More on Hyderabad, India. Jobs in Hyderabad.