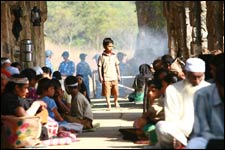 To be fair to it, Firaaq is not made for mainstream audiences - it is made for critics and film festivals, and if it can find people who will pay to watch it, that's a bonus. It has all the ingredients that would make a movie from India win international awards - i. e., poverty and slums. And the main faces in the cast are Deepti Naval, Naseeruddin Shah and Paresh Rawal, which make its case irrefutable.

A movie showcasing the profiling and terrorising of innocent Muslims post the Godhra attacks of 2002, Firaaq does an excellent job of being judgemental while looking completely non-judgemental. On the face of it, the film showcases the lives of everyday Muslims in Ahmedabad in the weeks immediately after the attacks, including an auto-rickshaw driver and his wife, an aging singer, a kid who's been orphaned by the riots, and a new-age businessman whose shop has been looted.

They are all victimized both by the administration and by ordinary citizens who are wary and almost xenophobically intolerant of Muslims after the attacks. The movie has no specific story, and like a true art film, ends totally randomly, unless, of course, you are willing to dig really deep to activate that part of your brain that handles subtle metaphors.

Sure, Firaaq is not made for entertainment; its maker - Nandita Das - has a point she wishes to make, and a style she chooses to do that in. By those parameters, any movie would be a good movie, of course, but even giving her the benefit of that doubt, you can't help see the biases inherent in her take of a very sensitive subject, which is essentially what makes this a less-than-haloed movie.

The biases come out in how naively anti-Muslim sentiments are denounced in the movie. For example, a universal gripe in India - that the English TV and print media give more footage and sympathy when Muslim/Christian victims are involved than when Hindu victims are involved, thus appearing "psuedo-secular" - is made to look despicable because it is a despicable person in the movie mouthing it.

Then, every time a point is made about how it was some Muslims that started it all - again a point that Das has to address given how many people feel that way - it is made by someone portrayed as coarse (a street-side vendor once, and an opinionated housewife at another time), in the direct presence of a silently-suffering victim, and quickly put down through sound arguments by educated and statesmanly hangers-around. Hardly the most mature way of handling the issue.

There are 2 commonly-held opinions of the Godhra riots (fullhyd.com endorses neither of them). The first is that the riots were heinous, quasi-genocidal acts of rape, mutilation and murder of innocent people, planned and executed by ruthless communal politicians interested in consolidating their votebanks and nothing else. The second is the more complicated, and seemingly insensitive, argument that the riots were a necessary evil to protect innocent Hindus from future attacks.

People of this opinion hold that the original perpetrators who torched a train targeted innocent Hindus themselves due to a traditional perception that Hindus are weak, and that these criminals can never be punished directly by the law (since no one knows who did it or where to find them).

The only way then, they argue, to ensure that they never do it again and that more innocent Hindus do not die as such criminals get emboldened, was to unleash a backlash that serves as a deterrent against such attacks again. For fear of what would happen to innocent people of their own community if they targeted innocent people of another community, they would not repeat, is the argument. Before calling us primitive, suggest an alternative, is their stance.

The problem with Firaaq, given how consistently it focuses only on the victimised Muslims (however much they deserve such focus), is that it is blatant in wearing its support for one stance on its sleeve, showing only one side of this complicated debate and belittling the other instead of suggesting any sensitive solutions.

Naseeruddin Shah is brilliant as an aging Muslim artist who won't see evil, and the film in general has good performances and intelligent portrayal of emotions - and good dialogues for Bollywood standards. A low-budget movie that shows it by appearing in 35mm, this one may not be the greatest of arthouse flicks, but is rather okay from a debutante director. Hopefully Das will present more balanced views hereon.
Share. Save. Connect.
Tweet
FIRAAQ SNAPSHOT

See Firaaq full details
FIRAAQ USER REVIEWS
1 - 5 OF 5 COMMENTS
POSITIVE  |  NEGATIVE |  NEWEST  |  OLDEST  |  MOST HELPFUL  |  LEAST HELPFUL
USER RATING
5.5
2 USERS
Performances
Script
Music/Soundtrack
Visuals
8.0
4.0
5.0
4.5
Can watch again - Unsure
Good for kids - No
Good for dates - No
Wait for OTT - No
fullhyd.com on 23rd Mar 2009, 11:14am | Permalink
@Siva - the reviewer wishes to thank you for the kind words. Some of our reviewers stay anonymous since that is the only way they can generate any interest in them :).
Siva on 22nd Mar 2009, 2:12am | Permalink
i have to appreciate the reviewer, for having the balls to say it tries to be judgmental while being non-judgmental. I havent watched the movie (will watch soon ), but from the reviews i gather that it is a well made movie. This reviewer says the same, but its a very very good point that he/she makes that whenever anti-muslim statements are made, they are made by people with no respect or value in the eyes of audience. this is a normal ploy used in all our movies, though in this kind of movie which tries to just portray how real people feel, is not really fair.although it would be pretty hard that there could be a justification for the mass murders both on train and in streets of Guj. I love the idea of watching a movie about how people who committed or couldnt stop others from committing a crime are going on with their lives, afterwards. How guilt, morality is affecting their life.. well, I guess we have to wait some more time before we find it out from a better film maker and with a more balanced script,

@xlncaditya : appreciate your passion for the movie, felt like that myself when similar things happened to movies I loved, but, sorry, rest of your comments sucked.

Thanks to the reviewer again, good work.

Kumar on 21st Mar 2009, 8:56am | Permalink
If you are filming a truth, rather than a fiction, every angle must be explored to educate the viewers about that incident. But nandita, for the sake of awards, focused on only one angle - 2002 riots were totally anti-Muslim. She misses the point: It was collective failure. While as Hindus of that place, time lost the balance so were their Muslim peers. It was a mistake done by two communities on Humanity. I appreciate Indian theaters, including Gujarat multiplexes, for screening this film, though it is totally biased.

priya on 20th Mar 2009, 9:11pm | Permalink
@xlnc: after reading this review, that was the conclusion you drew?
xlncaditya on 20th Mar 2009, 7:05pm | Permalink
Well I understand that the fullhyd reviewer was expecting some sort of a mirch masala movie when he entered the theatre and was astonished and blown out of his mind when he got to see a docu-drama in Firaaq. So now the reviewer is pissed and he should be coz if he expected a mirch masala movie and got a mirch masala movie he would have given it 4 or 5 (out of 10), but now with a movie like Firaaq he feels duped... so he gives it 3 even if most of the world loves the movie. I expect better... I know the movie doesn't deserve a 9 or 10...but 3 is heart breaking!

If you want to rate movies based on the action content and if the regular no-common sense audiences are your target its a shame. Coz I expect good movies to be given good ratings, and call a spade, a spade.

And fellow FullHyd fans, I prefer you read the reviews elsewhere for this movie or just go watch the movie and decide on your own.

ADVERTISEMENT
This page was tagged for
firaaq movie review
Firaaq hindi movie
Firaaq reviews
release date
Naseeruddin Shah, Paresh Rawal
Follow @fullhyderabad
Follow fullhyd.com on
About Hyderabad
The Hyderabad Community
Improve fullhyd.com
More
Our Other Local Guides
Our other sites
© Copyright 1999-2009 LRR Technologies (Hyderabad), Pvt Ltd. All rights reserved. fullhyd, fullhyderabad, Welcome To The Neighbourhood are trademarks of LRR Technologies (Hyderabad) Pvt Ltd. The textual, graphic, audio and audiovisual material in this site is protected by copyright law. You may not copy, distribute, or use this material except as necessary for your personal, non-commercial use. Any trademarks are the properties of their respective owners. More on Hyderabad, India. Jobs in Hyderabad.