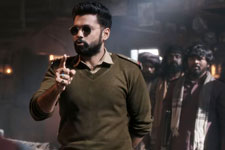 Chaitanya Karthik / fullhyd.com
EDITOR RATING
4.0
Performances
Script
Music/Soundtrack
Visuals
6.0
5.0
5.0
7.5
Suggestions
Can watch again
No
Good for kids
Yes
Good for dates
No
Wait for OTT
Yes
Ever wondered what would have happened had Jack Sparrow gone to KGF? It would have made an epic entertaining crossover, wouldn't it? Of course, the rules at Narachi would have ensured that Sparrow's antics would bury him six feet under, but he has survived a lot worse than that. What he probably may not be able to survive is Athade Srimannarayana, the admixture of the glorious Westerns, Indiana Jones, Pirates Of The Caribbean and KGF. There are quite a few other movies that you could add to this list, but you already get the point, don't you?

Athade Srimannarayana begins with a drama troupe that loots a treasure in a town called Amaravathi that apparently belongs to Rama Rama (Madhusudhan Rao), who is the head of a clan called Adheeras. The latter sends the drama troupe to meet their creators for what they've done, but only after shooting all of them dead does he realize that these guys haven't shared the location of the treasure. Oops.

It's 15 years later. Rama Rama wants Tukaram (Pramod), an illegitimate child of his, to be his heir, but Jayaram (Balaji), a legitimate child and the elder of the two, thinks that it's not cool. So he sends his father to the after-life and takes control of the fort they reign in. However he vows that he will not ascend the throne until he tracks down the treasure.

Nobody however still has a clue about the whereabouts of the treasure. Enter a cop, SI Srimannarayana (Rakshit Shetty), who hangs out in cow-boy pubs and keeps bullshitting people. He has the silliness of Jack Sparrow. He has the brains of Indiana Jones. He walks around like Blondie. He is as ambitious as Rocky Bhai. He tells stories about his father like The Joker. And in an unfortunate sequence of events, ends up committing to Jayaram that he will trace the treasure, to save his life.

This leads to his constantly being hounded by both Tukaram and Jayaram for information regarding the treasure, each of them constantly threatening to kill him. How he survives them both, how he finds the treasure, and what he does with it forms the rest of the story.

Rakshit Shetty gets to play a role that, despite being an amalgamation of multiple characters, comes across as monotonous. You don't see many emotions there, and have no clue why he does what he does. Shanvi Srivastava as Lakshmi has a meaty role, and it's refreshing to see a heroine whose presence is felt in the story, not just in the songs or the romantic scenes. The other performances are all decent, too.

Athade Srimannarayana's biggest problem is its pace. It's not slow - it's slooooooow. You feel like you would have been able to finish watching all five movies of the Pirates Of The Caribbean franchise in the time this one runs for. One may defend it saying that the story warranted the runtime, but the editing and the screenplay should have ensured that the audiences would be kept engaged.

The music is not extraordinary, and hardly does justice to the story. The visuals of the movie however stand out.

For a Kannada film with unrecognizable faces to work for a Telugu audience, it needs a special something. Unfortunately, the only thing Athade Srimannarayana stands out as is an endurance test.
Share. Save. Connect.
Tweet
ATHADE SRIMANNARAYANA SNAPSHOT 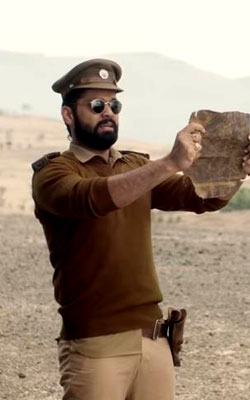