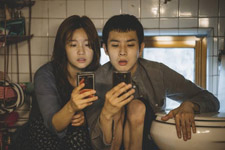 T J Reddy / fullhyd.com
EDITOR RATING
10
Performances
Script
Music/Soundtrack
Visuals
10.0
10.0
9.0
10.0
Suggestions
Can watch again
Yes
Good for kids
No
Good for dates
Yes
Wait to rent it
No
People often say that one finds a myriad of reasons for hating something or someone, but the same person can't list out a handful of motives for liking something or someone. Because love happens organically, you see. It transcends explanation, it exists all around us; love is a mystery; we never know what we want until we see it; and so forth. With his latest film, co-writer/director Bong Joon-Ho looks at the haves, the have-nots, and at his audience, and asks all of them why they love the things they love and subsequently place value in the things they do.

The affluent Park family love their beautiful home, their elegant car, their daily luxuries, and the system that lets them afford these luxuries. The poverty-stricken Kim family find themselves in the Park family's employ, and are in love with the taste of the luxuries afforded to them by being close to the affluence mentioned above. You might think the Kim family's well-being is a by-product of the Park family's benevolence. The former takes from the latter akin to a specific organism we can't quite put our finger on.

The experienced movie-goer in me and you might look at this vague plot description and assume that this is a tale of how a ragtag band of poors game the clueless rich. The former beat the latter at the latter's own game. The proles make their way out of poverty and live like royalty. They do this and they do that, they break the system, they write their destiny, winners make their luck and so on. We love those stories, don't we?

Why do we love those stories, though? Why is it that we live through those stories vicariously? Why is it that those stories remain stories for so many people? Why do so many people depend on one rupee kilo rice for generations if the system and our leaders are so perfect? What does the stock market being at an all-time high do for your bottom line? What did fighting for the pride of your leader or movie hero on Twitter or FaceBook ever do to help you? Why are we always told that the rich hate each other? Has any of us ever seen people at the finish line continue racing? Are they at fault for reaping the benefits of their status? Are we at fault for choosing to work towards becoming them and, in turn, making their lives better? Or is the system at fault for feeding us false hope using flashy ads and business gurus?

While this might seem like a ton of homework, like with your favourite teacher, the class Bong Joon-ho takes before it is endlessly engaging. Unlike a Samuthrakani project Parasite is not preachy, unlike a Pa. Ranjith joint it is not overtly political, unlike an Anubhav Sinha experience it isn't ham-handed, and unlike every art film you are told to like, it will not bore you to tears.

Parasite is kinetic. Like the hustle culture it so roundly mocks, the movie has no time to relax and look around. Every scene has a purpose, and every shot leads into the next. The film is rife with visual symbolism and exceptional filmmaking choices. The vibrant colour palette, the mischievous score, the impeccable set design, the simple yet effective editing, and the option the movie exercises to expose its audience to new aspects of the set as time goes on add to the film's hectic pace.

Every character that exists in this ecosystem influences the action of every other character. Speaking of ecosystems, the world we live in has a population of nearly 8 billion people. It has two distinct halves: the haves and the have-nots. Parasite condenses 8 billion people into eight characters, distills the two halves of the world into two clearly-defined homes, and never shortchanges its understanding of the unique experiences each stratum of the society and the people in it go through. The credit for the excellence here is shared by both the filmmaking and the absorbing acting showcased by an insanely talented ensemble.

Kim Ki-taek is only the newest addition to a stellar set of characters Song Kang-ho's brought to the screen throughout his impressive career. I, for one, genuinely encourage our readers to spare some time to watch Joint Security Area, Thirst, The Host, Memories Of Murder, The Attorney, The Show Must Go On and a few other movies to experience the career of an actor who has been at the top of his game for two whole decades. Ably working alongside him are the entire cast who perform their deftly etched roles with aplomb. The characters feel like people you know who somehow find themselves being a part of this wholly insane story.

And that is why I have asked every person I know to watch this film since June of 2019. I have been writing this review in my head for over seven months, and am still struggling to come up with words to adequately describe my love for this movie. While the rating scale on our site stops at a 10, Parasite gets the extremely elusive 11. While the film did win the Palme D'Or and should win the Oscar for Best Picture in a just world, a more-than-perfect score from our end is but our tiny way of showing appreciation to a true masterpiece.

It is a story about a group of people we know and can relate to going through a life-changing experience, and in turn, leaving us, the audiences who sat there and watched them, changed forever. Fake stories that somehow affect real change. What is not to love?
Share. Save. Connect.
Tweet
PARASITE (ENGLISH) SNAPSHOT 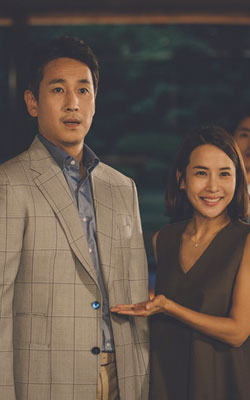 See Parasite (English) full details
PARASITE (ENGLISH) USER REVIEWS
1 - 2 OF 2 COMMENTS
POSITIVE  |  NEGATIVE |  NEWEST  |  OLDEST  |  MOST HELPFUL  |  LEAST HELPFUL
Kris on 26th Apr 2020, 10:04pm | Permalink
Extremely overrated movie. There is absolutely nothing super duper about the movie and its still unfathomable what made the movie get the adulation it got. This rating of 10 is a proof more of a compliance to its worldwide recognition (lest I might be called a fool syndrome !!) than of a genuine objective review.
Mark my words...10 is a pakkkka overrrrating...
rahulsachinsourav123 on 5th Feb 2020, 10:52am | Permalink
What a movie man...Left speechless at the end and didn't move an inch from my seat even after it is over. Scenes kept on rewinding and playing in my mind all through the night. Just wow. Haven't seen other finalists and can't comment on its Oscar worthiness...but dude, this is once in lifetime kind.
TJ Reddy on 9th Feb 2020, 6:08am | Permalink
This is what the cinematic medium is capable of when in the right hands. The amount of excellence on display here is insane. I hate myself for even revealing one line of plot because the film is far more engaging when one goes in as a blank slate. I've watched it thrice now and it gets better every time.

ADVERTISEMENT
This page was tagged for
Parasite (English) english movie
Parasite (English) reviews
release date
Song Kang-ho, Lee Sun-kyun
theatres list
Follow @fullhyderabad
Follow fullhyd.com on
About Hyderabad
The Hyderabad Community
Improve fullhyd.com
More
Our Other Local Guides
Our other sites
© Copyright 1999-2009 LRR Technologies (Hyderabad), Pvt Ltd. All rights reserved. fullhyd, fullhyderabad, Welcome To The Neighbourhood are trademarks of LRR Technologies (Hyderabad) Pvt Ltd. The textual, graphic, audio and audiovisual material in this site is protected by copyright law. You may not copy, distribute, or use this material except as necessary for your personal, non-commercial use. Any trademarks are the properties of their respective owners. More on Hyderabad, India. Jobs in Hyderabad.