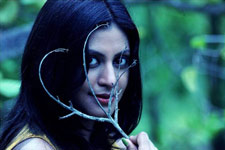 Kritika Deval / fullhyd.com
EDITOR RATING
3.0
Performances
Script
Music/Soundtrack
Visuals
5.0
5.0
3.0
3.0
Suggestions
Can watch again
No
Good for kids
No
Good for dates
No
Wait for OTT
Yes
We wonder about Tollywood's obsession with medieval molesters travelling into the future to molest "modern", feisty heroines. But then we realise that the plot is just perfect. It combines romance, action and horror into a package wrapped with hilariousness. In the case of Sahasra (which we assume was meant to be a spoof of the genre), though, we had the nerve-wracking experience of never being sure if the on-screen hilarity was intentional.

A rather atrociously dramatic beginning involving family aasthi, grabby relatives and a lechy baava slowly gradates into a surprisingly bearable film, probably because there is so very much to laugh at.

The story goes thus. Sahasra (Sri Ira), a young and lovely doctor who likes to wear heavy jewellery and georgette sarees while tending to the infirm, has suddenly been beset by a series of misfortunes so very misfortunate that overstatement is not possible. Within a span of what seems like about a week, four men in her life die supernatural deaths despite the fact that she only wanted two of them dead.

After the second death (of a prospective match who was her father's final wish), Sahasra's mother finally wises up to the fact that thar be some weird shit goin' on, and drags her skeptic of a daughter to the same pandit under whose advisement the match was made. The pandit prescribes daily circumambulations at a temple, and speedy marriage plans to a firm but gentle young man.

Over the course of the circumambulations (quickly say it 10 times; quick!), Sahasra makes two new firm but gentle friends (pun totally, absolutely, completely unintended. Pinky swear and you can't see my crossed fingers), gains a new fianc?, makes another guy fall dead by the virtue of supernatural cardboard lightning, and eventually ends up on a shrink's couch, where the shrink actually says "Look at my hands... You are feeling sleeeepy... Now slowly close your eyes... You are asleep, and when I snap my fingers, will bark like a dog". (Full disclosure: That last bit? We just wish the shrink had said. It would've been unbelievably cool.)

What follows is a flashback of our haunted girl in college so deliriously early '90s we were sure that if we walked outside the theatre we would see a garishly painted poster instead of a digital version. You will also see five girls obviously having the time of their lives with reanimated corpses, real ghosts, fake ghosts, spirit board games and a song pimping enough that we wanted to put on our Elvis costumes and step into that cheap-VFX-y wonderland to shake our booties with the girls.

Things happen during that flashback. Things like ghosts that cause what seems to be the ghosty version of syphilis, Lord Voldemort staring at you from the depths of an old well, a game of Ouija the spunky girls played right after their experiences that would probably have had us defecating involuntarily at regular intervals, and a prank so complicated we couldn't understand it even when it was explained to us.

We cut back to the shrink's couch after the trip back up the rabbit hole (God bless your wonderful mother if you understood that fairy tale reference), only to be sucked into an anarchic alternate universe where sleazy servants exist alongside queens who are neither heard nor seen.

By about the fourth time the heroine runs to the temple seeking the advice of her portly temple friend, we stopped trying to make sense out of the masterly plot, and decided to go along for the ride as best as our puny intellects allowed.

Sri Ira looks pretty, but lacks the oomph required to play the role of one sexually coveted over centuries. Reva does great justice to the veil that hides her face for the most part.

The leading men, including Krishnudu, Ravi Prakash, and Rajiv Kanakala, emote very little, but that is probably because the incredibly trippy script does not require it of them. Why use expressions when you can use ambient lighting and people covered in black bed sheets to scare people into crying out for their mothers?

Three sleazy characters played by Shafi, Jeeva and Prithvi make up for the unnecessity of their characters by being more than appropriately sleazy. There is Prakash Raj too, making use of his monumental talent to relay a flashback that is as baffling as it is unnerving.

While the sets are expectedly Telugu-serial-ish (including "Madhapur Hitex" in ways no Hyderabadi has ever seen it before), the editing and the camera work will surprise you by seeming more like something a bunch of media students spent a while fooling around with, rather than something contracted out to impoverished "software engineers" as most such films are wont to.

Sahasra is a movie whose enjoyment depends on your sense of humour and tolerance for the ridiculous in more or less equal parts. It works best as a gag gift to a frenemy, or as a way to ride out a bad trip in the comfort of twin seats and irregular air conditioning.
Share. Save. Connect.
Tweet
SAHASRA SNAPSHOT 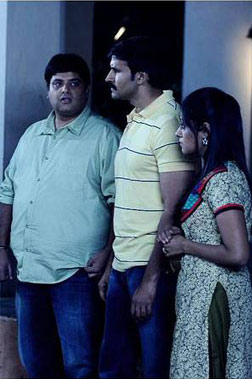 ADVERTISEMENT
This page was tagged for
Sahasra
Sahasra telugu movie
Sahasra reviews
release date
Krishnudu, Rajiv Kanakala
Follow @fullhyderabad
Follow fullhyd.com on
About Hyderabad
The Hyderabad Community
Improve fullhyd.com
More
Our Other Local Guides
Our other sites
© Copyright 1999-2009 LRR Technologies (Hyderabad), Pvt Ltd. All rights reserved. fullhyd, fullhyderabad, Welcome To The Neighbourhood are trademarks of LRR Technologies (Hyderabad) Pvt Ltd. The textual, graphic, audio and audiovisual material in this site is protected by copyright law. You may not copy, distribute, or use this material except as necessary for your personal, non-commercial use. Any trademarks are the properties of their respective owners. More on Hyderabad, India. Jobs in Hyderabad.