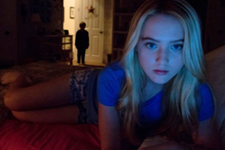 Kritika Deval / fullhyd.com
EDITOR RATING
4.0
Performances
Script
Music/Soundtrack
Visuals
6.0
3.0
4.0
5.0
Suggestions
Can watch again
No
Good for kids
No
Good for dates
Yes
Wait to rent it
Yes
We have suspicions of a conspiracy to root out all original stories, and to turn cinema into sets of templates which people can tweak to churn out movies. We know this might sound crazy, but there are signs everywhere, especially in Paranormal Activity 4.

The makers' USP of found footage still works, but barely. Nearly every step the plot takes is towards yet another ruminated-a-hundred-times-over development; and the big happy family of spooky family characters - including the creepy kid with "invisible" friends, the nubile teenage virgin, the skeptical parents, the "live" house, the jittery pet et al - is back with a bang.

While Paranormal Activity 2 & 3 labored at giving the franchise a back-story, this movie takes up where the second part left off. Kicking off with a possessed Katie (Katie Featherstone) killing her sister and kidnapping her baby, the story then fast forwards to five years later in 2011, in a different house and with a different family.

They find out that the boy, Robbie (Brady Allen), lives across the street with his mother, and send him off to his home. But soon, he has to stay with them for a few days, as his mother is hospitalized in an event that heralds the beginning of the "scares".

Robbie, his "invisible" friend (yeah, Robbie is that kid), and Alex's brother Wyatt (Aiden Lovekamp) get real tight. This puts Alex on alert as she smelled fish on Robbie right from the beginning. So, she gets her super-geek boyfriend to set up the cameras on all the laptops in the house to record everything that's happening.

Thus begins the Paranormal circle of shooting and watching and getting scared that goes on and on and on until the customary in-your-face ending. Any more plot insights would count as spoilers, but seriously, there isn't that much to tell anyway.

The grainy visuals, the moody house that you stare at as you wait for something to happen, a few decent scares - they all work. The usage of infra-red dots fired by XBOX 360's Kinect to track things going bump in the night was actually pretty cool. The fault, however, lies in the premise, that was thin to begin with, and with PA 4, got whittled down to near-nothingness.

The only decent acting you'll see is from the kids. Kathryn Newton and Matt Shivley as the suburban kids are wonderful. Their fear, their nervousness, their hysteria as they grappled with something beyond their experience - something that the grown-ups won't help them with - everything strikes as very real. The adults, however, go about their business in a wooden manner more befitting to a B-grade slasher flick.

For people who've seen the previous movies, this part does wrap up quite a few loose ends, albeit in a very lazy manner. If you're in it for a few cheap thrills, hop on. But if it's some honest-to-god scares you're looking for, you can give this one a miss.
Share. Save. Connect.
Tweet
PARANORMAL ACTIVITY 4 SNAPSHOT 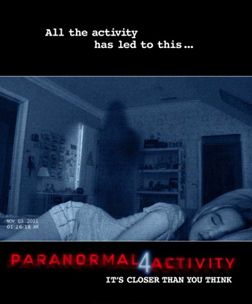 ADVERTISEMENT
This page was tagged for
Paranormal Activity 4 english movie
Paranormal Activity 4 reviews
release date
Kathryn Newton, Matt Shively
theatres list
Follow @fullhyderabad
Follow fullhyd.com on
About Hyderabad
The Hyderabad Community
Improve fullhyd.com
More
Our Other Local Guides
Our other sites
© Copyright 1999-2009 LRR Technologies (Hyderabad), Pvt Ltd. All rights reserved. fullhyd, fullhyderabad, Welcome To The Neighbourhood are trademarks of LRR Technologies (Hyderabad) Pvt Ltd. The textual, graphic, audio and audiovisual material in this site is protected by copyright law. You may not copy, distribute, or use this material except as necessary for your personal, non-commercial use. Any trademarks are the properties of their respective owners. More on Hyderabad, India. Jobs in Hyderabad.