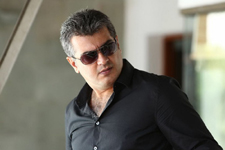 Pranita Jonnalagedda / fullhyd.com
EDITOR RATING
5.0
Performances
Script
Music/Soundtrack
Visuals
5.0
4.0
3.5
6.0
Suggestions
Can watch again
No
Good for kids
No
Good for dates
Yes
Wait to rent it
Yes
"Keep it simple", says Ajith. "Keep it simple," he says again. Then again and again. How we wish he had said the same to the director, again and again. If that would have happened, everything below would be totally different.

But that evidently didn't happen, and thus we have this cabbage of a film. We call it a cabbage because not only does Aata Aarambham have twists, turns and layers that resemble a cabbage, it also has the odourous property of one, to put it politely.

The story starts with Sanjay (Arya), a computer genius, who is kidnapped by his college classmate Maya (Nayantara) and her friend Ashok (Ajith). He is kidnapped so he may help them in some of their "terrorist" activities, as he calls them. He is coaxed into doing so as his girlfriend Anita (Taapsee) is "in their custody". The rest of the story is all about how and why Ashok and Maya indulge in these activities.

Aata Aarambham is the journey of a man, but we couldn't figure out till the end what this journey was for - justice or revenge. The movie has a promising start, but as it goes ahead, you feel it starts to waver. This is a film with an interesting script but lamentable direction, and deplorable editing.

There is nothing new that Aata Aarambham offers. The film is a cliched action-thriller-drama, with a plot that we have seen time and again. It is also a standard package filled with "punch" dialogues and heroism.

The director, in his attempt to make this the stylish film that it is, seems to have forgotten that an average film viewer has at least half a brain. For instance, he places the protagonists in the middle of a lake, in super-stylish coats, in an amazing boat, in Dubai - all this, just so they may discuss the plan for the next day. It sure looks stylish, but it looks stupid, too.

Aata Aarambham, which means "the game begins", keeps up its promise of being a game - thanks to its loopholes, it keeps you constantly in a state of wonder, right from scene one. Ajith plays a police officer who isn't corrupt but has stylish gadgets, travels in stylish cars, lives in the classiest of hotel rooms, and also has the money to employ a group of people under him. In another example of lack of logic, the most wanted criminal in the country finds it easy to travel in a plane (Air India, that too).

The film is laced with loads of flaws, but it has its merits. The performances are an asset, especially that of Taapsee. Although her character has limited scope to perform, she looks refreshing. Arya and Nayantara play their part well.

However the hero of our film, Ajith, is the hero of the performances too. He steals the show with his attitude, menacing looks, style and oomph.

However, Yuvan Shankar Raja's music disappoints. And a better treatment of the script would have resulted in a different film altogether.

Declared a blockbuster in Tamilnadu, this film was called "Aarrambam" there. However, its performance at the AP box-office is destined to be miserable. Nayantara, Rana and Taapsee are the only faces our audiences may have a familiarity with, and considering that their roles are just brief, and not really of visual significance, the film is not going to generate much excitement among Telugu viewers.

It seems like Aata Arambham was released just to gather some additional revenue for the producers, who seemingly have already laughed their way to the bank in October, when the movie "created waves" in Tamilnadu and abroad.

Overall, Aata Aarambham is a stylish film woven into a mediocre script, sprinkled with silliness. Watch it if you are an Ajith fan, else, wait for it to premier on television.
Share. Save. Connect.
Tweet
AATA ARAMBHAM SNAPSHOT 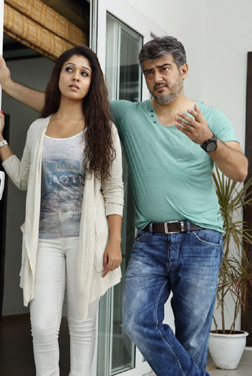 ADVERTISEMENT
This page was tagged for
Aata aarambam ajith telugu full movie
atta arambham movie ratings
Aata Arambham telugu movie
Aata Arambham reviews
release date
Follow @fullhyderabad
Follow fullhyd.com on
About Hyderabad
The Hyderabad Community
Improve fullhyd.com
More
Our Other Local Guides
Our other sites
© Copyright 1999-2009 LRR Technologies (Hyderabad), Pvt Ltd. All rights reserved. fullhyd, fullhyderabad, Welcome To The Neighbourhood are trademarks of LRR Technologies (Hyderabad) Pvt Ltd. The textual, graphic, audio and audiovisual material in this site is protected by copyright law. You may not copy, distribute, or use this material except as necessary for your personal, non-commercial use. Any trademarks are the properties of their respective owners. More on Hyderabad, India. Jobs in Hyderabad.