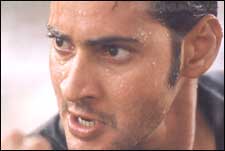 Deepa Menon / fullhyd.com
EDITOR RATING
7.5
Performances
Script
Music/Soundtrack
Visuals
NA
NA
NA
NA
Suggestions
Can watch again
NA
Good for kids
NA
Good for dates
NA
Wait for OTT
NA
How many times have you watched a major masala thriller cowering in your seat and wanting to scream at the hero - "Look behind, a man with a stic-aaaaaaaaaah?!" How many times have you watched a hero walk away trusting his little sister to scheming beastly parents-in-law, and wanted to warn him not to be so blind and stupid? And how many desperate times have you hoped that somehow, against all logic (ahem), the hero would get there in time to stop the spilling of innocent blood?

All right, so you've never thought any of these things, because being a sensible person, you know it's all make-believe anyway. In which case, please get the hell out of the theater. And close the door behind you.

For the rest of us, with starry-eyes firmly in place and logic happily suspended, Arjun is three hours of almost total paisa-vasool. This is a formula film from word go. And the formula is worked so well, you'll see why it was evolved in the first place. I'm sorry, did we say 'evolved'?

The hero - he doesn't have a name, yet - is not only just everything you'd want him to be, but, more importantly, also everywhere you want him to be: dancing in the bylanes of Russia and Madurai, ever at his family's side, and always on the path of justice and truth. And, to save you needless tension, he gets everywhere just in the nick of time.

The story is about as shop-soiled as they come. Not that we care, but it is. The hero (Mahesh Babu) is one of a pair of twins, and his sister (Keerthi Reddy) is married to the son of a couple of weasels. They're such weasely weasels, in fact, that they would kill to get out of a poker deal. So the fact that their son blows off a profitable alliance to marry middle-class makes them homicidally angry. Prakash Raj and Sarita are so convincing as the twisted two, it's scary in an impressive sort of way.

But because they're a respectable (rich) family, nobody suspects their slimy guts. So the sister comes to live in Madurai with her chokingly affectionate in-laws and her jelly-kneed husband (Raja). Only the hero suspects that all is not well. And this is how he comes to be sitting alone on a bridge, the steady rain dripping along his gore-splattered sickle. This is the beginning, middle and end of the movie.

The rest of Arjun is about the pieces of the puzzle falling in place. Why is the hero sitting on the bridge in the driving rain? Who are the extremely conscientious goons that are trying to behead him? And what is happening under the bridge? We can't give any of that away without, well, giving it away.

Mahesh Babu is, quite predictably, the one carrying the whole movie on his rounded shoulders. And he does a kickass job of it. The only thing that shares his screen time is the Madurai Meenakshi temple that was built out of a Rs. 2.5-crore Erector set. Money well spent, considering this won't be the last time we'll see it. Shriya, as the fleeting love interest, plays ditzy in a less-than-marginal role.

The reasons Arjun isn't as crisp as it deserved to be are one entirely unnecessary song-and-jig sequence in the second half, and the fights stretching the Matrix-effects to breaking point. No matter how securely your logic is suspended, you'll roll your eyes at some of the more blatant BS, especially during the wham-bams. These boo-boos draw the movie out when it could all have been wrapped up much sooner.

The usual, then, with lavish doses of music, throbbing heroism, and Mahesh Babu. Tollywood's most expensive masala flick. And no holds barred.
Share. Save. Connect.
Tweet
ARJUN SNAPSHOT

ADVERTISEMENT
This page was tagged for
Arjun telugu movie
Arjun reviews
release date
Mahesh Babu, Keerthi Reddy
theatres list
Follow @fullhyderabad
Follow fullhyd.com on
About Hyderabad
The Hyderabad Community
Improve fullhyd.com
More
Our Other Local Guides
Our other sites
© Copyright 1999-2009 LRR Technologies (Hyderabad), Pvt Ltd. All rights reserved. fullhyd, fullhyderabad, Welcome To The Neighbourhood are trademarks of LRR Technologies (Hyderabad) Pvt Ltd. The textual, graphic, audio and audiovisual material in this site is protected by copyright law. You may not copy, distribute, or use this material except as necessary for your personal, non-commercial use. Any trademarks are the properties of their respective owners. More on Hyderabad, India. Jobs in Hyderabad.