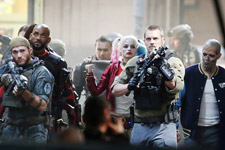 Jaiwantika Dutta-Dhupkar / fullhyd.com
EDITOR RATING
4.0
Performances
Script
Music/Soundtrack
Visuals
6.0
4.0
7.0
6.0
Suggestions
Can watch again
No
Good for kids
No
Good for dates
No
Wait to rent it
Yes
Suicide Squad has a terrible assortment of conflicted characters, all hastily thrown together and then quickly disposed of as the film draws to a close. The movie begins abruptly, jolts through several action sequences, and ends before you know it. A glorification of comic-book villainy is probably what this one set out to be, but it ends up being a very confused film. Thus you watch the anti-heroes fight the good guys, and are directed to root for the former, but then the film explains why, and that spoils the fun completely.

The plot is rather simple - outdated, even. June Moone (Cara Delevingne) is an archaeologist who's possessed by an otherworldly being called The Enchantress on an archaeological expedition. Amanda Waller (Viola Davis) recruits June and her partner, Captain Rick Flagg, on a covert intelligence operation, but June scoots midway, transforms into The Enchantress and summons her brother to help her take control of the whole world. The Enchantress then creates a formidable force of monsters who set out to wreak havoc everywhere.

Amanda, not one to sit around twiddling her thumbs, has plans to fight fire with fire. So she recruits a bunch of imprisoned anti-heroes from a facility which they have been condemned to for life, plants bombs in their necks that will go off the minute they disobey orders, and places them under the charge of Rick.

The anti-heroes eventually end up confronting The Enchantress, who can read their minds and offers them anything they want in return for their allegiance. Rick only wants June back.

The film is quite episodic, and montage-like, occurring in little bits and pieces. Call it style, but a fractured narrative is all you can expect when there are a host of characters but nothing noteworthy happens in the movie. Several characters could have been better cast, and a few actors have absolutely nothing to do in the film. Yet, it is the performances that redeem the movie somewhat - easily a directorial embarrassment, the film is made even moderately watchable only by the portrayals of The Joker (Jared Leto), Deadshot (Will Smith) and Harley Quinn (Margot Robbie, who wins cheers from the kids every time she appears on screen). Cara Delevingne is also well-suited to the role she's been given.

You also can't help wonder why the women in the movie are accomplished psychiatrists, intelligence agents and archaeologists - it adds nothing to the movie in a positive way. The film is also shockingly racist in several ways, suggesting that only white people go to Ivy League colleges, that Latinos are synonymous with Burritos (Jay Hernandez), and that Japanese women (Karen Fukuhara) are akin to Samurai.

The music for Suicide Squad (Steven Price) is however a plus, as is the editing (John Gilroy) which keeps the pace going.

On the whole, Suicide Squad is quite a gag-worthy film, really, and you could spend your time better.
Share. Save. Connect.
Tweet
SUICIDE SQUAD SNAPSHOT 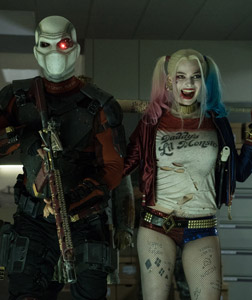 ADVERTISEMENT
This page was tagged for
Suicide Squad english movie
Suicide Squad reviews
release date
Will Smith, Jared Leto
theatres list
Follow @fullhyderabad
Follow fullhyd.com on
About Hyderabad
The Hyderabad Community
Improve fullhyd.com
More
Our Other Local Guides
Our other sites
© Copyright 1999-2009 LRR Technologies (Hyderabad), Pvt Ltd. All rights reserved. fullhyd, fullhyderabad, Welcome To The Neighbourhood are trademarks of LRR Technologies (Hyderabad) Pvt Ltd. The textual, graphic, audio and audiovisual material in this site is protected by copyright law. You may not copy, distribute, or use this material except as necessary for your personal, non-commercial use. Any trademarks are the properties of their respective owners. More on Hyderabad, India. Jobs in Hyderabad.