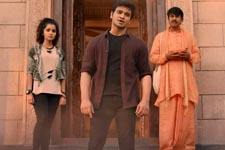 Sai Tulasi Neppali / fullhyd.com
EDITOR RATING
6.5
Performances
Script
Music/Soundtrack
Visuals
6.5
6.0
7.5
8.5
Suggestions
Can watch again
No
Good for kids
No
Good for dates
Yes
Wait for OTT
Yes
Eight years after the box-office success of Karthikeya, writer-director Chandoo Mondeti returns with a more ambitious sequel and a fresh supporting cast for lead actor Nikhil Siddharth. At first glance, Karthikeya 2 is about a hero's epic journey to locate an ancient artifact that could save humanity. But at a deeper level, it is engaged in a debate of science versus mysticism.

The movie's eponymous hero, Karthik (Nikhil), is a medical doctor, but he has an insatiable curiosity for supernatural mysteries. He is a man of logic who reads Sherlock Holmes and Agatha Christie, but he can also hypnotize snakes using "waves and vibrations". He is an atheist surrounded by a devout family. In other words, Karthik is Mondeti's interpretation of the typical young Indian sandwiched between tradition and modernism, toeing the line between TikTok videos and temple visits with uncanny ability.

On a trip to Dwaraka with his mother, Karthik unwittingly gets pulled into the hunt for an iconic piece of Hindu mythology - an anklet belonging to Lord Krishna. The anklet is purported to hold the key to solving the modern world's plagues. An archeologist, Prof. Rao, who uncovers the first clue to finding the anklet, fears his knowledge will fall into wrong hands, and enlists Karthik to continue the mission. Aided by Rao's granddaughter Mugdha (Anupama Parameswaran), and an unlikely duo of a Krishna bhakth Sadanand (Srinivasa Reddy) and a Muslim driver Suleiman (Harsha Chemudu), Karthik sets off on his quest. Chasing his tail is a greedy doctor, Santanu (Adithya Menon), the leader of a secret society intent on commercializing the panacea.

Mondenti's passion for Indian mythology and its untold stories is pervasive in his screenplay. Karthik meets a bevy of Hindu scholars that open his eyes to the wisdom and technological sophistication of our ancestors. The most erudite of them is a blind researcher named Ved Pathak (Anupam Kher), who delivers a lengthy monologue about Lord Krishna's fantastical powers.

At times, these exhortations are hard to understand and unmoving - they make heavy use of uncommon Sanskriti-Telugu words like "aadhyam" and "samidha". Preachy and didactic, they feel like heavy-handed attempts at influencing the audience's personal beliefs. The hero's quest is secondary; Mondeti is more interested in using him to ply an ideology that mysticism and religion can live in harmony alongside logic and science. And that in fact, the former sustains the latter. Sure, there may be parts of our cultural history that are problematic, which we must outright reject, as depicted in one of the story's unnecessary tangents when Karthik liberates a girl from the clutches of an exorcist. But Mondeti wants even the most Westward-facing skeptics amongst us to concede to the prowess of the East.

That's why Karthikeya is shown to swiftly transform from an atheist to a believer. In one of the more revelatory scenes of the movie, Karthik discovers a cave that holds a clue to locating the anklet, but it is shrouded in darkness. In a stroke of insight, he chants a mantra - asathoma sadhgamaya (let there be light where there is darkness). As his booming voice echoes off the walls, a series of mirrors orient themselves and sunlight pours in, illuminating the cave. Karthik and his friends marvel at the result, calling it the work of ancient sound engineers.

When Mondeti's story shines, it's in large part thanks to Karthik Ghattamaneni's breathtaking cinematography. Scenes of the hero's perilous journey across North India - from salt flats of the Bundelkhand desert and the lush fields of Mathura to the frozen rivers of Himachal - are masterfully shot and edited.

Kaala Bhairava's background score matches the larger-than-life aspect of the story, even if at times it sounds overbearing. Like the barbaric growl played every time a character from the tribe of Abheera, an extremist cult of Krishna devotees, enters the frame. Or the heavy electric guitar accompanying hype shots of Karthik. A couple of peppy montage songs showing Karthik's journey provide a nice interlude to the intense ongoings.

Buff and cocky, lead actor Nikhil Siddharth brings a boatload of style to the character of Dr. Karthik. But he has a distinct look of conceit and self-awareness, which is at odds with his character's call for open-mindedness and humility.

Anupama Parameswar is pushed to Nikhil's background in most scenes, but her expressive kajal-laden eyes and her sincere portrayal of Mugdha make her an arresting presence. As funny sidekicks, Srinivasa Reddy and Viva Harsha bring some light-heartedness to the screen even though their lines aren't particularly witty. Adhithya Menon who plays Santanu is supposed to be the big menacing villain, but by the end of the movie his character fizzles out without leaving a mark.

With Karthikeya 2, Mondeti has cemented a strong brand for the doctor-adventurer hero and set the stage for a sequel. Although science and religion make for strange bedfellows, Mondeti is intent on exploring their intersection through the lens of Indian history. Good for him, because the source material is nearly endless.

Karthikeya 2, like its prequel, implores you to look to the past for your salvation and not blindly trust in modern science. And as such, depending on your religious or spiritual inclination, you might either find large chunks of the movie uplifting or dismiss the premise entirely.
Share. Save. Connect.
Tweet
KARTHIKEYA 2 SNAPSHOT 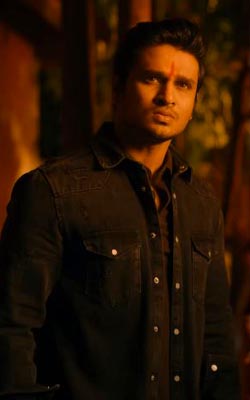 ADVERTISEMENT
This page was tagged for
Karthikeya 2 telugu movie
Karthikeya 2 reviews
release date
Nikhil Siddharth, Anupama Parameswaran
theatres list
Follow @fullhyderabad
Follow fullhyd.com on
About Hyderabad
The Hyderabad Community
Improve fullhyd.com
More
Our Other Local Guides
Our other sites
© Copyright 1999-2009 LRR Technologies (Hyderabad), Pvt Ltd. All rights reserved. fullhyd, fullhyderabad, Welcome To The Neighbourhood are trademarks of LRR Technologies (Hyderabad) Pvt Ltd. The textual, graphic, audio and audiovisual material in this site is protected by copyright law. You may not copy, distribute, or use this material except as necessary for your personal, non-commercial use. Any trademarks are the properties of their respective owners. More on Hyderabad, India. Jobs in Hyderabad.