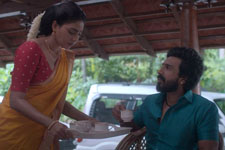 Sai Tulasi Neppali / fullhyd.com
EDITOR RATING
6.5
Performances
Script
Music/Soundtrack
Visuals
8.0
6.0
7.0
7.0
Suggestions
Can watch again
No
Good for kids
No
Good for dates
Yes
Wait for OTT
Yes
There isn't a more mismatched couple in Rajamundry than Veera and Keerthi. Veera (Vishnu Vishal) wants a meek, obedient wife - bonus points if she's failed high school! Whereas Keerthi (Aishwarya Lekshmi) is a B.Sc graduate and a pro-wrestler. As the infamous saying goes - it's okay to tell even a thousand lies for the sake of a wedding. That's just what the elders do, and get them hitched.

Veera and Keerthi are obviously extreme examples that Chella Ayyavu's Matti Kusthi (dubbed from Tamil's Gatta Kusthi) uses to make a point about gender equality. But their exaggerated contrast makes for some explosive comedy. Veera has no idea who Keerthi truly is. She wears a butt-length wig to hide her bob and uses her ample arm strength to cook vats of chicken curry. Veera discovers Keerthi's deception when she comes to his rescue by thrashing a pack of goondas. Her wig comes right off her head and smacks Veera in the face like a bristly wake-up call. He is mortified to be saved by his wife - by a woman. His male ego vaporizes when the villagers then start ignoring him and make a local celebrity out of Keerthi.

Gatti Kusthi's true villain is toxic male ego. Chella's dialogs - funny and shocking - are a trip to the dark side of the hypermasculinity of Indian men, particularly those of an older generation. Veera's uncle (Karunaas) just so happens to be the personification of the rot. He holds up domestic violence as a kind of rite of passage for a new husband. His never-do-gooder friends go on nightly benders, bitching about their wives. Veera wants to be a good husband, but he's trapped inside a chauvinist bubble without even realizing it. And he loses Keerthi because of it.

The first half is a riot. Keerthi's wig is used as a vivid visual metaphor for male versus female roles in a marriage. At first, Veera doesn't so much fall for Keerthi, as for the length of her hair. To him, long-haired women are traditional mahalaksmis, short-haired ones are way too "empowered". So Keerthi's prodigious wig floors him. Keerthi, meanwhile, is trying to be a good wife by washing, shampooing, and decorating her wig with jasmine garlands every day. Until her charade unravels and Veera must accept Keerthi for the badass woman she is.

It's Veera's transformative journey in the second half that bores with cliches. It devolves into a predictable social drama. In an attempt to create a high-stakes finale, the story introduces tangential characters like a leery wrestling coach. There is even an ironic scene at the very end where a man stands in front of a horde of cameras and urges people to believe that women are, in fact, equal to men. This pedantic stance kills the vibes, undoing much of its earlier charms.

It has become a stereotype to cast Aishwarya Lekshmi as a tough, independent woman (Godse, Gargi, PS-1). Ironically, she is a better actor when portraying a demure, ever-smiling wife rather than a badass wrestling champion. In the pre-interval scene, Keerthi sheds her good-wife image and performs kusthi moves in front of a group of slack-jawed villagers. The camera shows her like a mass-movie hero, with slow-mo punches and flying hair, but the scene lacks the impact that was expected. This may be due to her stiff acting, but it also highlights how hollow and self-defeating it is when female liberation is depicted as mimicking male posturing.

Vishnu Vishal, who also produced the movie, is a real talent. There is an intense kusthi match featuring his character, during which Vishal performs some seriously impressive moves. The rest of the male cast is especially good at portraying their misogynist roles.

Matti Kusthi is at its cinematic best when its characters talk to us through wit and symbolism. The minute they step up to the pulpit and dive into joyless lectures, the movie loses its allure, and thus its message too.
Share. Save. Connect.
Tweet
MATTI KUSTHI SNAPSHOT 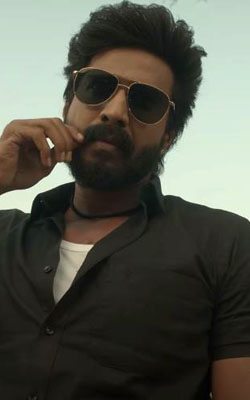 ADVERTISEMENT
This page was tagged for
Matti Kusthi telugu movie
Matti Kusthi reviews
release date
Vishnu Vishal, Aishwarya Lekshmi
theatres list
Follow @fullhyderabad
Follow fullhyd.com on
About Hyderabad
The Hyderabad Community
Improve fullhyd.com
More
Our Other Local Guides
Our other sites
© Copyright 1999-2009 LRR Technologies (Hyderabad), Pvt Ltd. All rights reserved. fullhyd, fullhyderabad, Welcome To The Neighbourhood are trademarks of LRR Technologies (Hyderabad) Pvt Ltd. The textual, graphic, audio and audiovisual material in this site is protected by copyright law. You may not copy, distribute, or use this material except as necessary for your personal, non-commercial use. Any trademarks are the properties of their respective owners. More on Hyderabad, India. Jobs in Hyderabad.