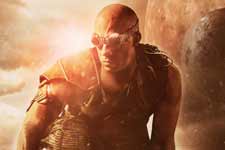 Swayamsrestha Kar / fullhyd.com
EDITOR RATING
4.0
Performances
Script
Music/Soundtrack
Visuals
4.0
4.0
3.0
5.0
Suggestions
Can watch again
No
Good for kids
No
Good for dates
No
Wait to rent it
Yes
There's a fundamental flaw in trying to re-create a masterpiece. It is also potentially unwise to fleece an idea so thoroughly that it resembles a mongrel with a skin disease instead of a sheep that's been freshly shorn. Also, deciding to make another movie in a franchise for which the lead actor has already earned a Razzie Award nomination in the past is as smart a decision as getting Botox.

For the uninitiated, Razzie Awards (or Raspberry Awards) are doled out to actors to commemorate their worst performances. It is like people laughing at a stand-up comedian, instead of laughing at his/her jokes.

Allow us to flex our metaphorical muscles a little bit, if only for the sole purpose of assuring ourselves that not all of our logic centres have short-circuited themselves into a sullen oblivion for having been subjected to Riddick.

Pitch Black (written by David Twohy, Ken White and James White), the first instalment in the Chronicles of Riddick series, surprised critics by gaining a cult following. But then, the movie did have a taut screenplay, gritty visuals and a fast-paced narrative. And audiences were content enough to take these three positives, and overlook Diesel's deadpan rendering of the titular character Riddick.

Yeah, you guessed right: the same cannot be said for the fourth movie in the series. Except for the bit about Vin Diesel.

Riddick (Vin Diesel), an escaped convict, is the only remaining Furyan - a warrior race renowned for the hand-hand combat skills and the sheer formidableness of its members on the battlefield. In the second movie, The Chronicles of Riddick (please refer to the part where we say words like "Razzie Award" and "nomination"), Riddick was crowned as the Lord Marshall of a race of dark religious fanatics called the Necromongers.

This movie begins with Riddick stranded on an alien planet with a dry dusty savannah grassland-kind of look about it. The sepia tinted frames are lovely in their own way, but become visually stifling after a while.

In a series of flashbacks, we are told how Riddick had been duped into believing that this planet is Furya (his home planet) by Commander Vaako (Karl Urban looking deliciously evil in a cameo). Riddick strikes a deal with Vaako that the latter could be Lord Marshall, provided Riddick was granted safe passage to Furya.

Needless to say, Vaako cheats him, and gets his minions to leave Riddick on a planet which is most definitely NOT Furya. The planet is mercilessly arid, and bare of vegetation. The temperatures are of the scorching persuasion. There are savage beasts galore - hyena-like dogs and slimy tentacle-ed scorpion thingies - and bubbling sulphur ditches.

Couple that with a thunderstorm in the distance, which brings with it the promise of birthing more of those poisonous scorpion-like beasts, and Riddick is pretty much ready to bid adieu to the planet.
Finding an abandoned mercenary station, Riddick beams news of his presence on the planet to the cosmos in general, and sure enough, the "fools rush in". There's a bounty on his head, which will be doubled if he is brought in dead. So, there's Santana (Jordi Molla), a Spanish bounty hunter, and his thugs, who come equipped with machete, machine guns, thermal imagers and a box to keep Riddick's head in.

Then there's Boss Johns (Matt Nable), a mercenary with a personal agenda against Riddick, and his group of gun-toting, sleeker-looking-than-the-grubby-bounty-hunters soldiers who don't necessarily want Riddick dead, although that is not necessarily a good thing.

Not only does Riddick have to fight these men (and one woman. My, my, really big on gender equality, aren't we?), he also has to escape the planet before the thunderstorm and the poisonous creepy-crawlies catch up with him (and the others too).

Frankly speaking, water would congeal faster than the pace at which the narrative moves forward. The movie feels too long, and the editing is sloppy.

It would also have been tremendously helpful if there had been dialogues that didn't rely heavily on the F-word to get the point across or to act as fillers. Sure, we don't go to a Vin Diesel movie for the dialogues, oh exalted makers of Riddick, but let's at least pretend that we are aspiring for more? And for all its promotional worth as an "action" movie, where, oh where is the action?

The animation team does a barely decent job, because we get a whole "Aliens" d?j? vu with the main villainous alien creatures here - the scorpion beasties. Also, could you tone down on the sepia?

Vin Diesel is a likable actor. Over the years, he has carved a niche for himself, and he makes sure that he stays in shape to fit into it with ease. However, as edgy as he was in Pitch Black, he is that much (if not more) toned down in Riddick. And that spells doom in huge glittering font for the film. The rest of the characters are half-baked, forgettable and dispensable.

We felt this sense of triumph after exiting the movie hall, basking in the fact that we survived the movie without going deranged and chewing off our own feet. And then we noticed the tagline on the Riddick posters - "Survival is his revenge". 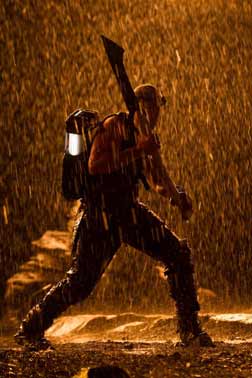 ADVERTISEMENT
This page was tagged for
Riddick english movie
Riddick reviews
release date
Vin Diesel, Jordi Molla
theatres list
Follow @fullhyderabad
Follow fullhyd.com on
About Hyderabad
The Hyderabad Community
Improve fullhyd.com
More
Our Other Local Guides
Our other sites
© Copyright 1999-2009 LRR Technologies (Hyderabad), Pvt Ltd. All rights reserved. fullhyd, fullhyderabad, Welcome To The Neighbourhood are trademarks of LRR Technologies (Hyderabad) Pvt Ltd. The textual, graphic, audio and audiovisual material in this site is protected by copyright law. You may not copy, distribute, or use this material except as necessary for your personal, non-commercial use. Any trademarks are the properties of their respective owners. More on Hyderabad, India. Jobs in Hyderabad.