Fantastic Beasts And Where To Find Them Review 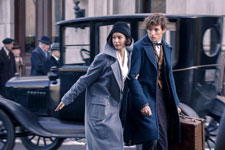 Swaroop Thotada / fullhyd.com
EDITOR RATING
7.0
Performances
Script
Music/Soundtrack
Visuals
7.0
6.0
7.0
8.0
Suggestions
Can watch again
Yes
Good for kids
Yes
Good for dates
Yes
Wait to rent it
No
While Harry Potter films took us to an exotic magical world brimming with wonders and enchantment in every nook and corner, Fantastic Beasts imports the otherworldly to the sober real world, setting them together. And the obvious friction between the two worlds that is bound to ensue provides the plot - with a bold political overtone taking a dig at the intolerance for the immigrants that is stirring the US at the moment.

It's the '20s America (decades before Potter), passionately sceptic of wizards and witches, and magic is already taboo. Pacts are in place to impose stringent restrictions on the exposure of the magical world, but a strange and mysterious dark force is prowling around in the streets of New York. The dark Lord Gindelwald has gone missing, evoking even more unrest among the magical community, especially the Magical Congress of the United States of America (MACUSA). Into this land of tumult, steps Newt Scamander (Eddie Redmayne), with his mysterious briefcase which is what this film is all about.

Newt's briefcase is a storehouse of wonders, and houses magical creatures that should not be let loose at any cost, not because they are dangerous but because men are. The creatures range from a puckish yet charming duck-billed platypus called Niffler, a giant thunderbird, a dragon-like occamy that grows and shrinks to fit the space around it, and a rhino-like beast called Erumpent. Cutest of them all is a twig-like tiny creature that not only is so cuddly but also dares in key moments.

While visual effects have proved themselves to be more than capable in imparting character to animals in recent films like Jungle Book, that's not what these beasts are for here. They are wild and instinctive, and are completely unaware of the dangers they pose and face. They need Newt as much as this film needs them, but constantly try to break away from the briefcase, much to Newt's dismay.

Newt is a quirky and eccentric nerd who is constantly distracted by his naughty little friends that manage to escape his briefcase whenever they get a chance. With a hairstyle at its disarrayed best, a frail frame and a limp-like walk, Redmayne gives us an unconventional protagonist who admits he annoys people. Though his quirks do not make him very likeable, the creatures that he surrounds himself with redeem him. So your emotional investment is stolen by Jacob Kowalski, the easiest likeable character, played with an impeccable earnestness by Dan Fogler.

Jacob, a wannabe baker, is your surrogate for a while, until he realises he is not dreaming anymore and that all the magic around him is real. Katherine Waterston plays Tina Goldstein, a former auror at MACUSA, who is bent on turning Newt in for his recklessness that annoys her. Her sister is Queenie Goldstein (Alison Sudol), who can't resist the temptation of reading people's minds. She is all eyes for Jacob, and Sudol plays Queenie with an aptly pretentious persistent glee.

Some of the creatures manage to break free from the briefcase at the wrong time, when a mysterious and murderous dark force is wreaking havoc, and MACUSA's Percival Graves (Colin Farell) mistakes Newt to be the cause. Now Newt and his friends have to catch the creatures before the bigoted humans can harm them under the pretence of protecting themselves.

The plot is much more stuffed than this, and involves several threads and sub-plots that will probably make more sense in the sequels. Despite that, the overly dense plot cleverly leaves enough room for the film's simplistic central theme.

However the sub-plots are effectively utilised for the political commentary the film is very keen on. Percival mentors a suspiciously introvert Credence Barebone, a victim of child abuse, and harbours more than a dangerous secret. His authoritarian and puritanical mother (Samantha Morton) prohibits magic, and Credence's repression is the film's allude to the current times, and is indicative of the film's liberal overtone.

The visuals in the Potter films always leaned towards a self-aware ostentiousness and preferred to be dreamy like rather than hyper real. As the sequels gradually veered into darkness, the colour palette adapted gothic themes. David Yates, who directed the final Potter films, seems intent on the same feat again as this film dives into a darker tone towards the end, and the sequel is bound to inherit it. Rowling's exceptional writing that always drips with imagination and the spectacular visuals surely will shoulder the thematic burdens.

Potter titbits pop up here and there, like the mention of Dumbledore, Lestranges etc., and more loyal fans will spot even more. Though the wand-wars are quite few, fans will relish them. It's no secret now that Johnny Depp has a cameo in this film. And given how he sets fire to the screen even in the very few seconds he appears, the sequels are bound to be even more entertaining.
Share. Save. Connect.
Tweet
FANTASTIC BEASTS AND WHERE... SNAPSHOT
FANTASTIC BEASTS AND WHERE TO FIND THEM SNAPSHOT
See Fantastic Beasts And Where To Find Them full details
FANTASTIC BEASTS AND WHERE... USER REVIEWS
FANTASTIC BEASTS AND WHERE TO FIND THEM USER REVIEWS
Be the first to comment on Fantastic Beasts And Where To Find Them! Just use the simple form below.
LEAVE A COMMENT
fullhyd.com has 700,000+ monthly visits. Tell Hyderabad what you feel about Fantastic Beasts And Where To Find Them!
MORE MOVIES
Latest Reviews
Pogaru (Telugu)
Naandhi
Kapatadhaari
Chakra
Chakra (Tamil)
more
Uppena
Zombie Reddy
G-Zombie
30 Rojullo Preminchadam Ela
Jai Sena
Bangaru Bullodu
Madam Chief Minister
Red (Telugu)
Master (Tamil)
Master - 2021
Contemporary Reviews
Force 2
Tum Bin 2
Ghatana
Dear Zindagi
Jayammu Nischayammu Raa
more
Remo
Arrival
Ekkadiki Potaavu Chinnavada
Intlo Deyyam Nakem Bhayam
Desierto
Rock On 2
Saahasam Swaasaga Saagipo
Doctor Strange (3D)
Naruda Donoruda
Random Reviews
Shanghai Noon
The Party
The Core
Madhoshi
Malamaal Weekly
more
House of Flying Daggers
Next
Heyy Babyy
The International
Happy Returns
The Rise Of The Planet Of Th...
Batman 3 - The Dark Knight R...
Nasha
Tomb Raider
Terminator: Dark Fate (Telug...
SEARCH MOVIES
Dissatisfied with the results? Report a problem or error, or add a listing.
ADVERTISEMENT
SHOUTBOX!
{{todo.name}}
{{todo.date}}
[
ip{{todo.ip}}
]
{{ todo.summary }}... expand »
{{ todo.text }} « collapse
First  |  Prev  |   1   2  3  {{current_page-1}}  {{current_page}}  {{current_page+1}}  {{last_page-2}}  {{last_page-1}}  {{last_page}}   |  Next  |  Last
{{todos[0].name}}

ADVERTISEMENT
This page was tagged for
Fantastic Beasts And Where To Find Them english movie
Fantastic Beasts And Where To Find Them reviews
release date
Eddie Redmayne, Katherine Waterston
theatres list
Follow @fullhyderabad
Follow fullhyd.com on
About Hyderabad
The Hyderabad Community
Improve fullhyd.com
More
Our Other Local Guides
Our other sites
© Copyright 1999-2009 LRR Technologies (Hyderabad), Pvt Ltd. All rights reserved. fullhyd, fullhyderabad, Welcome To The Neighbourhood are trademarks of LRR Technologies (Hyderabad) Pvt Ltd. The textual, graphic, audio and audiovisual material in this site is protected by copyright law. You may not copy, distribute, or use this material except as necessary for your personal, non-commercial use. Any trademarks are the properties of their respective owners. More on Hyderabad, India. Jobs in Hyderabad.