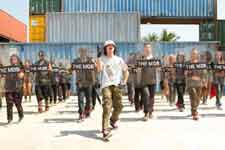 Kritika Deval / fullhyd.com
EDITOR RATING
6.5
Performances
Script
Music/Soundtrack
Visuals
6.0
5.0
8.0
8.0
Suggestions
Can watch again
Yes
Good for kids
Yes
Good for dates
Yes
Wait to rent it
No
So what if the story is about a bunch of really confused people? That's not what you go to watch a Step Up movie for, anyway. Whistle-inducing dance sequences accompanied by music that'll have you trying to pop and lock with the best of 'em, and - of course - something worthwhile to keep you occupied when playing hooky from college, are all the reasons you need to justify spending extra cash to watch Step Up Revolution in 3D.

The cast is built almost entirely of clichés. You have the dance crew that "wants to be heard", the poor little rich girl who wants to "break the rules" (an oft-repeated phrase in the movie), her rich business magnate "Scrooge" of a daddy who dismisses her aspirations as impractical, and his lackey who sucks up to the daughter to win brownie points with the father. But, from amongst all this mediocrity, the dancers and their passion for the art shine through like a bright, bright beacon.

Sean (Ryan Guzman) and Eddie (Misha Gabriel) have brought together a team of brilliant artists - artists of music, technology, visuals, and of course, dance - to create "The MOB", a crew that's working all of Miami into a frenzy, by organizing loud, intricate flash mobs just about anywhere they're most likely to garner the maximum attention. Their aim is to go viral and get as many hits on YouTube as possible, so they can win a cash prize which will set them up for life. These superheroes of hip-hop even have their pedantic alter egos. In real life, they work as waiters at a classy hotel.

One fine day, their employer's daughter, Emily (Kathryn McCormick), waltzes into Sean's life, demanding to be let into the MOB, so that she can explore her potential as a dancer. Sean convinces his crew, but hides the pesky little detail of who she really is, including the fact that it was "daddy dearest" who fired Eddie. She gets in, does a great job, and all is sunshine and roses for a while. Then one day, Emily's father decides he'd like to buy the neighborhood where all the crew members live, raze it down, and build a posh new area from scratch, costing the lot of them and others their livelihoods and homes.

That's when Emily hits upon the brilliant idea of turning the MOB into a kind of super-effective sounding board for the community. However, the crew members find out Emily's secrets, have a temporary brain failure, and sabotage their goals, their aims and everything just to get back at her, thus getting themselves into the worst possible predicament.

There is a lot in this movie that is entirely dispensable. But, much can be forgiven in this rusty sieve of a plot that exists merely to serve as a foil to the awe-inspiring dexterity, outlandish creativity, and breathtaking visual appeal of the dance sequences. Music, lights, costumes, timing and all other peripherals are exactly as they ought to be.

The utilization of 3D technology is superb. The soundtrack will have you humming the music for some days to come. The chemistry between the lead couple is corporeal enough to touch. Also, prepare to be pleasantly surprised by special appearances from a few old friends "stepping up". 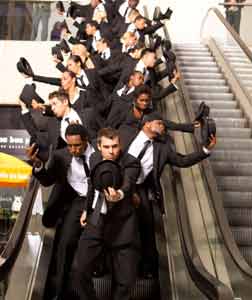 ADVERTISEMENT
This page was tagged for
Step Up 4: Revolution (3D) english movie
Step Up 4: Revolution (3D) reviews
release date
Kathryn McCormick, Ryan Guzman
theatres list
Follow @fullhyderabad
Follow fullhyd.com on
About Hyderabad
The Hyderabad Community
Improve fullhyd.com
More
Our Other Local Guides
Our other sites
© Copyright 1999-2009 LRR Technologies (Hyderabad), Pvt Ltd. All rights reserved. fullhyd, fullhyderabad, Welcome To The Neighbourhood are trademarks of LRR Technologies (Hyderabad) Pvt Ltd. The textual, graphic, audio and audiovisual material in this site is protected by copyright law. You may not copy, distribute, or use this material except as necessary for your personal, non-commercial use. Any trademarks are the properties of their respective owners. More on Hyderabad, India. Jobs in Hyderabad.