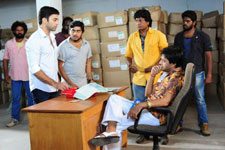 Kritika Deval / fullhyd.com
EDITOR RATING
5.0
Performances
Script
Music/Soundtrack
Visuals
7.0
4.0
5.0
6.0
Suggestions
Can watch again
No
Good for kids
No
Good for dates
No
Wait for OTT
Yes
Bum Bholenath, as all other films do, begins with a disclaimer stating its non-endorsement of smoking and drinking despite the avid portrayal of these vices. It also does something different, though. Smoking ganja, a disembodied voice goes on to explain, does induce uncontrollable laughter and a tendency to take the "fast" part of fast food to imply to the rate of consumption rather than of preparation; but it also causes a lot of other problems.

This is just the second clue that the film is like that stoner friend with a mistaken sense of their own profundity, the first being the title.

The story begins with two men, Vikas (Navdeep) and Krishna (Naveen Chandra), who are both looking for an easy leg up in life, albeit in different directions. Vikas wants to get a job in the IT sector so he can settle down with his lady love Sri Lakshmi (Pooja Jhaveri), while Krishna has his heart set on becoming a Dubai don. They both go about achieving their goals in different, initially interesting but eventually annoying ways.

Somewhere along the already long and convoluted line, their endeavors meet those of Rocky (Pradeep Machiraju) and Roshan (Kireeti Damaraju) as the latter duo try to fulfill their sole aim of getting to a rave party, their girlfriends (Prachi and Shreya) and an untold amount of drugs in tow, a task that reaches monumental levels of difficulty by virtue of the two being stoned as a witch in 17th century Salem.

We say their endeavors entangle because that is what happens. For most of the film, the only points common in all three journeys is one car that changes hands in coincidences that work much too hard to defy logic, reality and probability. And so, we present to you a theory. Bum Bholenath, we believe, isn't meant to be seen as a normal movie, but is, in fact, a representation of reality through the eyes of a stoner. Deep, right guys? Hear us out. The film constantly plays around with our perception of time. Every thing that happens is inexorably slapstick. Everything seems like an unbelievable accident. Any attempt at keeping track of what's happening results in a headache. And, things take forever to end.

If that's what the makers were going for, Bum Bholenath seems to have hit the spot. If that isn't the case, the movie comes off as half-baked (get it guys! we said baked and this is a stoner flick!). You get that a lot of thought was put into what the makers wanted the film to be, but not so much into how to get it there. Things begin well, and end well. The middle, which includes most of the plot, is hopelessly muddled. What makes things even more annoying is the fact that there's good in there, just out of reach. Just like that stoner friend we mentioned earlier.

The screenplay is extremely confused, but comes into sharp focus for a few moments of situational humor. The camera work is decent. The title track is earworm material. And then, there are the performances.

Navdeep, one of our industry's most underrated performers, infuses his character with so much nuance that, based on the treatment all of the other characters get, we cannot believe the makers intended it. Naveen Chandra gets right into the spirit of things and gives a solid performance. Posani, as always, is hilarity in human form. The girls are all are pretty and personable, if sometimes annoying. Pradeep Machiraju and Kireeti Damaraju are quite convincing (a tad too much, perhaps?). Thagubothu Ramesh, Dhanraj and the rest do the best they can with what they have.

At the end of the day, Bum Bholenath is not consistently bad enough to denounce entirely. More disappointing than anything else, it is still a decent one-time watch.
Share. Save. Connect.
Tweet
BUM BHOLENATH SNAPSHOT 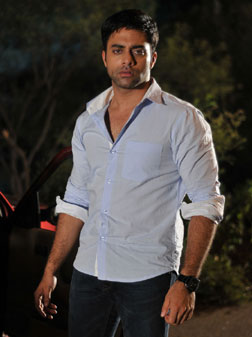 ADVERTISEMENT
This page was tagged for
Bum Bholenath telugu movie
Bum Bholenath reviews
release date
Navdeep, Naveen Chandra
theatres list
Follow @fullhyderabad
Follow fullhyd.com on
About Hyderabad
The Hyderabad Community
Improve fullhyd.com
More
Our Other Local Guides
Our other sites
© Copyright 1999-2009 LRR Technologies (Hyderabad), Pvt Ltd. All rights reserved. fullhyd, fullhyderabad, Welcome To The Neighbourhood are trademarks of LRR Technologies (Hyderabad) Pvt Ltd. The textual, graphic, audio and audiovisual material in this site is protected by copyright law. You may not copy, distribute, or use this material except as necessary for your personal, non-commercial use. Any trademarks are the properties of their respective owners. More on Hyderabad, India. Jobs in Hyderabad.