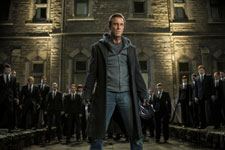 Swayamsrestha Kar / fullhyd.com
EDITOR RATING
4.0
Performances
Script
Music/Soundtrack
Visuals
4.0
3.0
3.0
4.5
Suggestions
Can watch again
No
Good for kids
No
Good for dates
No
Wait for OTT
Yes
Mary Shelley's Frankenstein was written during a long hard winter in the snowy slopes of Switzerland. Perhaps that is why, there is just the subtlest hint of cold permeating the whole narrative atmosphere in the story. The ambitious scientist-creator Victor Frankenstein has a lofty ideal in his head as to what his "creature" would look like. He dreams of physical perfection, and is instead left with an eight-foot-tall "thing" whose skin barely covers its muscles and tissues. Repulsed by its ugliness, he abandons "it".

The most obvious idea that the novel talks about is how the creator is always reflected in the creation. Perhaps that is why Victor could not face the creature - because the creature was the reflection of its master's deepest darkest desires, of what the master actually looked like on the inside.

One look, then, at Aaron Eckhart's chiselled torso and that incredibly square jaw, and you know that this film is going to be a nightmare for the avid lover of Mary's Victor's Frankenstein (and this reviewer falls staunchly in that category).

Mary Shelley's Frankenstein is awesome for so many reasons that it is blasphemous what the makers of I, Frankenstein have done to her monster-hero. Firstly, it was a woman who had written what is contended arguably the prototype of the sci-fi novel, and that fact has kept this reviewer from giving up on her own repertoire of stories concerned with time-travel, parallel dimensions, and cosmic adventures. Indeed, "how would Mary Shelley continue this giant mess of a story?" is a question that this reviewer has frequently asked herself whenever she has stumbled upon a fence in the path of her carefree creative amble.

Secondly, the whole purpose of making Frankenstein physically hideous is to highlight our obsession as a species with unattainable standards of beauty, how we value something that should be trivial over everything else, and how this tendency cripples our enjoyment of the here-and-now. Really, it just throws a wench in the creative realization of the whole narrative if you give the creature washboard abs and styled hair.

Thirdly, did the makers of the movie forget that Frankenstein's monster was perhaps canonical Literature's first major zombie? And that because of that, he really does deserve more respect than this?

Aaron Eckhart plays "Adam" Frankenstein (a clever reference to the creature's most memorable dialogue in the novel - "I am the Adam of your labours") who has turned recluse from the world of living because of the simple fact that he had never been a part of it to begin with. At the end of Shelley's novel, the monster had fled to the North Pole and Victor (played by Aden Young in the movie) follows him there. When Victor dies of the terrible cold, Adam buries him, and prepares to live a life of penance and solitude.

Soon after, he is attacked by demons, and is rescued by gargoyles (gargoyles! auch a waste of Gothic material!) who take him to their queen Lenore (Miranda Otto). Now, the gargoyles have supposedly been assigned by some angel, the task of protecting humans from demons, and they have giant wings and they fly around being badass. None of that watching over high-rises and providing a perch-cum-washroom for pigeons for these savers of mankind. We did think of making some "stoned" jokes, but, heh, never mind.

Moving on, stray demons who just happen to roam around are not the only thing that Frankenstein has to contend with. There is the demon prince Naberius (Bill Nighy) who parades around as human billionaire Charles Wessex (a watery attempt at a joke perhaps? like how all capitalist suckers are basically soulless worshippers of Satan?). He has hired a scientist Terra (Yvonne Strahovski) to find out how to reanimate corpses and create entire armies of Frankensteins. Which is why he wants Adam to hand over his creator's cookbook, sorry, diary, wherein Victor had kept records of his experiments with various corpses before he created the monster.

The storyline is pretty standard. In fact, it stands somewhere between "stale" and "bleh". Seriously, even Bill Nighy gets lost between all the action and the thumping music. There is nothing here that we haven't seen in other films like Constantine (which at least had the ethereal Tilda Swinton as Angel Gabriel).

The dialogues are downright corny, and there's a lot of "We must"s being tossed around - as in "We must destroy Frankenstein", "We must find Frankenstein's journal", "We must stop hulking around like mossy boulders and get a life or something" (kidding about the last one). And the whole chemistry between Adam and Terra is so obviously forced.

The special effects are zany in places (yet again, the 3D is terribly underutilised), but the cathedral-church sets make it look a lot like Mortal Instruments or Underworld.

Aaron Eckhart, who has played the delightfully devious Two-Face in the Batman movies, does half the job here when the whole of his face is intact (sigh!). Bill Nighy can only narrow his eyes and look intensely at things for so long, and even that cannot spare the audience from being bored out of their minds. Miranda Otto is still caught up in her role as Eowyn in LOTR, and the rest of the cast turn in pretty mediocre performances as well.

This one is a definite miss. In fact, this reviewer now has to watch that epic theatre adaption of Frankenstein, starring Benedict Cumberbatch and Johnny Lee Miller, in order to reconnect with her favourite zombie-hero.
Share. Save. Connect.
Tweet
I FRANKENSTEIN SNAPSHOT 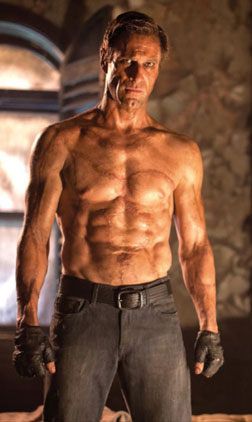 See I Frankenstein full details
I FRANKENSTEIN USER REVIEWS
1 - 1 OF 1 COMMENTS
POSITIVE  |  NEGATIVE |  NEWEST  |  OLDEST  |  MOST HELPFUL  |  LEAST HELPFUL
Pasya on 24th Mar 2014, 1:06am | Permalink
"Mary Shelley's Frankenstein was written during a long hard winter in the snowy slopes of Switzerland."
-Really? I thought it was summer.

ADVERTISEMENT
This page was tagged for
I Frankenstein english movie
I Frankenstein reviews
release date
Aaron Eckhart, Yvonne Strahovski
theatres list
Follow @fullhyderabad
Follow fullhyd.com on
About Hyderabad
The Hyderabad Community
Improve fullhyd.com
More
Our Other Local Guides
Our other sites
© Copyright 1999-2009 LRR Technologies (Hyderabad), Pvt Ltd. All rights reserved. fullhyd, fullhyderabad, Welcome To The Neighbourhood are trademarks of LRR Technologies (Hyderabad) Pvt Ltd. The textual, graphic, audio and audiovisual material in this site is protected by copyright law. You may not copy, distribute, or use this material except as necessary for your personal, non-commercial use. Any trademarks are the properties of their respective owners. More on Hyderabad, India. Jobs in Hyderabad.