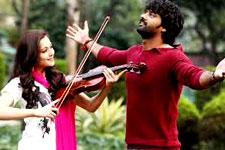 T J Reddy / fullhyd.com
EDITOR RATING
1.5
Performances
Script
Music/Soundtrack
Visuals
2.0
1.0
2.0
4.0
Suggestions
Can watch again
No
Good for kids
No
Good for dates
No
Wait to rent it
Yes
Mahatma Gandhi's autobiography was titled My Experiments with Truth. It chronicles his life and times from early childhood to the year 1921. It was written in weekly installments and published in his journal Navjivan. This fun fact has given me an inspiration. I watch movies, write about them and have those writings published on a weekly basis. Maybe I should bring all these articles together and call the collection My Experiences With Cinema.

My intent is the same as that of Gandhiji even if the topics we are discussing are as varied as can be. The intent is to put in words my feelings about movies and moviemakers and to understand how their stories impact societies. Film is as much a reflection of society as is the evening news. What movies make and don't make money or what movies achieve or don't achieve critical acclaim show what we as a people want in our entertainment. These thoughts might not seem incongruous when dissecting a movie titled Juliet... Lover of Idiot, but as most of us know, inspiration usually comes from unlikely sources. Juliet introduced herself to me as the Lover Of Idiot, and I returned the favour by presenting myself as a Lover Of movie.

After a bunch of off-brand Nuvvu Naaku Nacchaav credits, the movie presents Juliet's and the Idiot's stories. While I like to call him The Idiot, his friends and family know him as Vara (Naveen Chandra). Vara is a valet-parking driver with a love of fast cars and easy money. He falls in love with Julie (Nivetha Thomas) after seeing her feed a group of homeless people. Please hold your outrage at this Telugu movie staple for a few more moments - this is the least of these character issues.

Unimpressed by Vara's low standing on the totem pole of class, Julie's father offers him a sum of Rs. 10 lakhs to "forget" the young lady. Vara gladly accepts this, but under the condition that he be included and have the final say in any and all of Julie's prospective grooms. All parties involved accept this proposal. While you are busy trying to wrap your head around this, the movie very conspicuously slips in a B-plot about a briefcase with a laptop that both the police and a mafia leader, Khan (Abhimanyu Singh), want.

While this synopsis might seem nonsensical and inoffensive on the surface, the movie's proceedings have a whole host of characters, plot lines and moments that had me confused as to which part of it I was supposed to dislike more than the other. Was I supposed to dislike the movie more because of its stance on the gay community or for it having one of the least likeable lead characters of 2017? Even though I'm all for LGBT rights, how could I ignore the fact that the character of Vara was a greedy, one-note, inflection-free, manipulative stalker who thinks controlling the life of a woman is a God-given right to him because he was born with a pork-sword between his legs?

This was the biggest point of contention for me during the interval, and once I walked back in and subjected myself to the second half, my conflicted mind cleared up as I realized that the writer/director of this movie had little to no clue about the story he himself was trying to tell. The second half attempts to humanize Julie by giving her an extended run of screentime.

Before this run, I thought Julie was both the Juliet and the Idiot of this story as she was more than happy with the proceedings of this motion picture. As the run unfolds, however, we learn that Julie had been stalking Vara a full two years before he began stalking her. The stalking involves her inappropriately touching him, taking pictures of him without his knowledge, invading his personal space and so on, with the movie romanticizing her behavior by characterizing it as bubbly and cute. Of course, I don't need to explain why this is wrong. This is callous storytelling at its laziest, and I shudder to think that somewhere, someone may have taken any, if not all, of this movie's themes to heart.

Fortunately, you're highly unlikely to watch this film. There's a reason it was in the cans for over two years, and none that it released. And Nivetha Thomas dodged a bullet by not having this be her debut effort in Tollywood. While this was pencilled in to be the first effort, the movie was, as I mentioned, unable to get a release for very long. Her flat performance while essaying an unlikable character could have wrapped up her career in Tollywood up before it even started.

Naveen Chandra's single-expression performance of a wholly unrelatable character is painful to watch with every passing second. This feeling of discomfort reaches its zenith, or should I say nadir, when he belts out a speech about how a guy finds a girl, learns everything about her and stalks her into submission, while all the girl ever does is leave him and marry some other guy. This level of tone-deafness in both writing and performance exists at every juncture of the movie.

Ali and Abhimanyu Singh are doing their comedy and villain shticks respectively, and that's all I say about that.

The musical cues, the score and the songs seem dated. The notes rarely complement the story they are in, and the fact that there are songs and montages glorifying the aforementioned disturbing behaviour is... well, it seems I've run out of words to express myself.

On the brighter side, this one is a competently, if not interestingly, shot movie visually.

For most bad movies, I find myself poking holes at the lapses in logic, poor structure and the funny errors in the background of every shot. But every once in a while, a bad movie makes me pause. These are the times significant personal experiences add so much to my experiments. I learn about the moviemaker when I watch the movie, and by gauging the reaction a movie gets, I learn more about the society viewing the movie. And after reading into some of the chatter for this one, I can say, hope is alive and well in our midst.
Share. Save. Connect.
Tweet
JULIET LOVER OF IDIOT SNAPSHOT 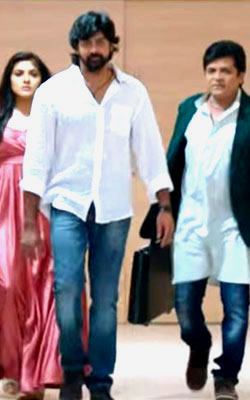 ADVERTISEMENT
This page was tagged for
julitu lover move songs 2019
Juliet Lover Of Idiot telugu movie
Juliet Lover Of Idiot reviews
release date
Naveen Chandra, Nivetha Thomas
Follow @fullhyderabad
Follow fullhyd.com on
About Hyderabad
The Hyderabad Community
Improve fullhyd.com
More
Our Other Local Guides
Our other sites
© Copyright 1999-2009 LRR Technologies (Hyderabad), Pvt Ltd. All rights reserved. fullhyd, fullhyderabad, Welcome To The Neighbourhood are trademarks of LRR Technologies (Hyderabad) Pvt Ltd. The textual, graphic, audio and audiovisual material in this site is protected by copyright law. You may not copy, distribute, or use this material except as necessary for your personal, non-commercial use. Any trademarks are the properties of their respective owners. More on Hyderabad, India. Jobs in Hyderabad.