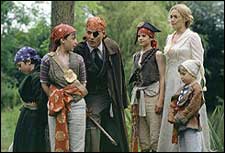 Ghazala Rizvi / fullhyd.com
EDITOR RATING
8.0
Performances
Script
Music/Soundtrack
Visuals
NA
NA
NA
NA
Suggestions
Can watch again
NA
Good for kids
NA
Good for dates
NA
Wait to rent it
NA
I am always amazed by the writers who churn out tales of pure imagination. Unbelievable absurdities weaved into an all-fitting rational web. The story of Peter Pan is one masterpiece in such waters. And when the story about the man whose cerebral child Peter Pan is is out, it always makes for interesting viewing.

'Finding Neverland' is directed by Marc Forster and based upon the play 'The Man Who Was Peter Pan' by Allan Knee. The movie chronicles a brief period in the life of James Mathew Barrie, during which he conceived and penned the children's classic.
Married to the socially correct ex-actress Mary Ansell (Radha Mitchel), James (Johnny Depp) is a playwright of a different genre. Romanticism is his life, and dreams, his solace. He could believe in a dancing bear, a talking whale or rudder-tugging pirates, all in the midst of a London public park. Which did little to his credit as a writer.

James finds a breather to his imaginations when he meets the Davies family, comprising a widowed mother Sylvia (Kate Winslet) and her four sons, George, Peter, Jack and Michael. The fatherless boys find a companion in James, who possesses matching vigor and enthusiasm.

As his involvement with the boys grows, he threads his way across the turf of Neverland. Bits and piees of Peter Pan keep shining in upon his memory. The incidents from the lives of these growing boys become the bedrock of the great play to be written.

The rumors went that James was fooling around with the Davies family at the cost of his own marriage. His life, which might have been listless before, now listed of a true friend in Sylvia and a true antagonist in Emma du Maurier (Julie Christie), Sylvia's mother, who felt like she would prefer to toast him in hell.

On the other hand, it was costing Charles Frohman (Dustin Hoffman), the theater owner, a fortune to tread water for this novel play, which had a cast including a dog called 'Nana'.

All reservations apart, James indeed hits a purple patch this time. The suave London theater-goers can't help themselves feeling touched by the rational sillines of the concept. Peter Davies is acknowledged as the inspiration of the play, but it is James, with his refusal to grow up, who comes out in the charecter of Peter Pan.

'Peter Pan', the show, was a success, though Sylvia and her brood were unable to attend due to her illness. James brings Neverland to Sylvia's doorstep and fortifies the boy's faith in the magic of belief.

The story is beautifully laid out, with Johnny Depp reflecting all the subtle nuances of a writer who believes intensely in happiness. The movie ends with the thought that while you grow a day older each day you wake up, you never lose the keys to the realm of imagination.
Share. Save. Connect.
Tweet
FINDING NEVERLAND SNAPSHOT

ADVERTISEMENT
This page was tagged for
Finding Neverland english movie
Finding Neverland reviews
release date
Johnny Depp, Kate Winslet
theatres list
Follow @fullhyderabad
Follow fullhyd.com on
About Hyderabad
The Hyderabad Community
Improve fullhyd.com
More
Our Other Local Guides
Our other sites
© Copyright 1999-2009 LRR Technologies (Hyderabad), Pvt Ltd. All rights reserved. fullhyd, fullhyderabad, Welcome To The Neighbourhood are trademarks of LRR Technologies (Hyderabad) Pvt Ltd. The textual, graphic, audio and audiovisual material in this site is protected by copyright law. You may not copy, distribute, or use this material except as necessary for your personal, non-commercial use. Any trademarks are the properties of their respective owners. More on Hyderabad, India. Jobs in Hyderabad.