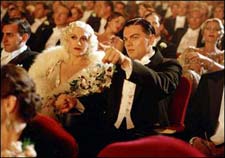 EDITOR RATING
7.0
Performances
Script
Music/Soundtrack
Visuals
NA
NA
NA
NA
Suggestions
Can watch again
NA
Good for kids
NA
Good for dates
NA
Wait for OTT
NA
The Aviator is a version of the life of Howard Hughes, billionaire, American aviating pioneer, controversial moviemaker, flamboyant playboy, eccentric germophobe and - what the film doesn't touch upon - a nest for several of the CIA's covert and mostly illegal operations, a man who wet his beak in too many deals that would please the underworld, and a friend and employer of several people who'd put their careers, their money, their physical well-being, their second cars, their flower vases, their paperweights and everything else we've missed here, ahead of their country.

In many ways, The Aviator shows as someone deserving of your sympathy, a man you'd normally tell your kids to stay away from. It takes enormous creative licenses completely distorting several important facts that could make material difference to the way that the person is perceived. It's surprising that it has 11 Academy Award nominations.

The films starts by showing a prodigious Howard Hughes (Leonardo DiCaprio) at 21, inheritor of millions and willing to spend it. It shows him investing an unprecedented amount of money ($4m) into his first foray into Hollywood, Hell's Angels, a path-breaking war film that in reality lost $1.5m at the box-office despite the acclaim it won. The film portrays it as a money-spinner.

An exceptionally cocksure pioneer and an intrepid visionary, Hughes picks from his experiments with aircraft in the movie to get into building them, and bigger and bigger. He also doesn't use his money and charm for easy kill even though he has women for the pick - he goes on to date some of Hollywood's choosiest women: Katherine Hepburn (Cate Blanchett) who gets more press than him and would like it that way with his attention, Ava Gardner (Kate Beckinsale) who "cannot be bought", and Jean Harlow (Gwen Stefani) who needed neither his money nor his fame. (The film shows them as following one another, though Ava Gardner came in much later.)

Hughes is already married when he enters Hollywood, but that isn't referred to in all the tumultuous romances. The film follows him as he builds better and better aircraft, buys his own airline, dates and loses Hollywood divas, and slowly succumbs to what we now refer to as Obsessive Compulsive Disorders - in his case, a fear of germs. He uses all the money he has to lock himself up in a penthouse sealed away from his microscopic nemeses, in sequences done movingly. He emerges briefly to take on a Senate hearing investigating war profiteering and tax crimes by him, and rises to the occasion, winning the battle against both the Senator and Pan Am, his arch-rival.

The film rides high on the back of a vibrant performance by DiCaprio, who brings to life the reckless spirit of Hughes. The first half shows the glitter of the old Hollywood and pulsates with the vivacity of the man in his prime, but as it moves into the second half (this is a 165-minute film), factual licenses abound, and it becomes more of a film.

For example, the film ends in 1947 with Hughes almost losing it, while Hughes in reality lived till 1976, did a lot more including selling TWA and buying RKO studios, buying off Presidents, and hobnobbing with and hiring the underworld, and most of his illness was in the last 2 decades of his life. And as as we already noted, he was no more an American patriot than Don Juan - his only charity, the Hughes Medical Institute that he created, was allegedly primarily an instrument to save taxes on his business, and survived a bitter fued with the IRS.

Cate Blanchett has the challenging role to play of a woman who won a record 4 Oscars and who was eccentric in her own way, and while it would take a Hollywood commentator to aver on Blanchett being Hepburn, she's certainly impressive. All performances are honest, and the visuals are grand and on luxuriant scale.

The Hyderabadi is not generally up for films with 11 Oscar nominations for primarily their scripts and performances, and this is not likely to last any more than a couple of weeks.
Share. Save. Connect.
Tweet
THE AVIATOR SNAPSHOT

See The Aviator full details
THE AVIATOR USER REVIEWS
1 - 3 OF 3 COMMENTS
POSITIVE  |  NEGATIVE |  NEWEST  |  OLDEST  |  MOST HELPFUL  |  LEAST HELPFUL
USER RATING
8.0
12 USERS
Performances
Script
Music/Soundtrack
Visuals
NA
NA
NA
NA
Can watch again - NA
Good for kids - NA
Good for dates - NA
Wait for OTT - NA
Rock Beats on 23rd Feb 2005, 11:13pm | Permalink
The Aviator is a beautiful experience though it has to be admittes that its not the best work by Scorsese.The most appealing part of the movie is the chance to have a glimpse into Hollywood's glory days.This movie as the name suggests is about a man who loved planes more than anything else.It takes a few liberties while telling the story ...well even history does that.I can only request the reviewer that he/she give an honest review.I dont want to know if Hyderabadis will like the movie or not.My only concern is if the movie deserves to be seen.A good critic should educate the reader and not take the readers choice as the benchmark for the movie.
RATING
8
Patch on 22nd Feb 2005, 2:05pm | Permalink
hmm. i don't think veracity of biopic material has anything to do with oscar nominations. films hardly ever stick to the 'truth' anyhow, as rabbithole so succintly pointed out. i didn't go into the theatre with as much information as this reviewer (why is there no byline?), and so sat absolutely riveted through all the merry lies. i'm rooting for leo this sunday (and even for scorcese, now that he's made up for the gangs of new york disaster). in other words: masterful, hilarious, moving, and well, brilliant. wanted to give it four-and-a-half stars, but fullhyd only allows me whole numbers, so.
RATING
8
Rabbithole on 21st Feb 2005, 12:21pm | Permalink
abt the truth thing..thats the way they make movies in hollywood be it peterpan(finding neverland) or beautiful mind...i read the boook beautful mind and found that the movie was dissimilar to the real story in many ways...for example the hero has a kid with someone outside his marriage and is also kinda gay..lol..thats true
RATING
6
LEAVE A COMMENT
fullhyd.com has 700,000+ monthly visits. Tell Hyderabad what you feel about The Aviator!
MORE MOVIES
Latest Reviews
Don't Worry Darling
Vikram Vedha
Ponniyin Selvan - 1
Naane Varuvean
Nene Vasthunna
more
Krishna Vrinda Vihari
Saakini Daakini
Where the Crawdads Sing
Everything Everywhere All At...
Aa Ammayi Gurinchi Meeku Che...
Brahmastra: Part One - Shiva
Oke Oka Jeevitham
Brahmastra: Part One - Shiva
Ranga Ranga Vaibhavanga
First Day, First Show
Contemporary Reviews
Seemasimham
Vishnu
High Society
My Brother Nikhil
Socha Na Tha
more
Dil Ne Jise Apna Kaha
Chronicles Of Narnia: The Li...
Finding Neverland
Cat Woman
Gemeni
Arjun Pandit
Jurm
Page 3
Malliswari
Random Reviews
13 Ghosts (English)
Timepass
Maurya
Neelambari
Ready
more
Quick Gun Murugun (English)
Red (English)
The Ides Of March
Rise Of The Guardians (3D)
Last Vegas
Ekkees Toppon Ki Salaami
Sankarabharanam (2015)
Despicable Me 3 (3D)
Kavacham
Wild Dog
SEARCH MOVIES
Dissatisfied with the results? Report a problem or error, or add a listing.
ADVERTISEMENT
SHOUTBOX!
{{todo.name}}
{{todo.date}}
[
ip{{todo.ip}}
]
{{ todo.summary }}... expand »
{{ todo.text }} « collapse
First  |  Prev  |   1   2  3  {{current_page-1}}  {{current_page}}  {{current_page+1}}  {{last_page-2}}  {{last_page-1}}  {{last_page}}   |  Next  |  Last
{{todos[0].name}}

ADVERTISEMENT
This page was tagged for
The Aviator english movie
The Aviator reviews
release date
Leonardo DiCaprio, Cate Blanchett
theatres list
Follow @fullhyderabad
Follow fullhyd.com on
About Hyderabad
The Hyderabad Community
Improve fullhyd.com
More
Our Other Local Guides
Our other sites
© Copyright 1999-2009 LRR Technologies (Hyderabad), Pvt Ltd. All rights reserved. fullhyd, fullhyderabad, Welcome To The Neighbourhood are trademarks of LRR Technologies (Hyderabad) Pvt Ltd. The textual, graphic, audio and audiovisual material in this site is protected by copyright law. You may not copy, distribute, or use this material except as necessary for your personal, non-commercial use. Any trademarks are the properties of their respective owners. More on Hyderabad, India. Jobs in Hyderabad.