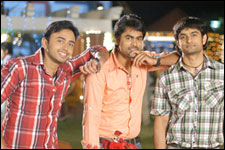 Deepa Garimella / fullhyd.com
EDITOR RATING
2.5
Performances
Script
Music/Soundtrack
Visuals
5.0
3.0
4.0
6.0
Suggestions
Can watch again
No
Good for kids
No
Good for dates
No
Wait for OTT
No
Duniya is yet another of those simplistic teach-the-terrorists-a-lesson affairs that show a bunch of kids taking on hard-core jihadis like they are the neighbourhood mobile-phone thieves. With a patriotic "Live for friendship, die for your country" as its tagline, you know what to expect of it.

3 friends - from different religions - are in Hyderabad, leading their lives and landing babes, when disaster slowly strikes. The Muslim among them, Azhar, is being made a proxy to carry out a dangerous terrorist group's bomb attack plan.

Azhar and his friends first decide to corner these goons and bash them up. Things take a turn for the worse, but they soon plunge deeper into the intricate plan of a Karachi-based terrorist and local rowdy-sheeters, of bombing 6 places in Hyderabad.

Eventually, the people who help our heroes tell them that informing the police about this terror network would do absolutely no good, and so, they handle them all on their own. Needless to say, the police just cannot figure out what exactly is going on.

This is a film with ambition but no skill or resources. The movie attempts to show several things, like how Muslims are viewed with suspicion by the police, and how hardened terrorists use innocent people to carry out their heinous operations.

The plot is elaborately constructed, and the dialogues well-meaning, but all in a way that shows the lack of professional finesse. The poor direction and the amateurish acting kill whatever Duniya has going for it. Several scenes are clumsily put together. This is the kind of film that even features an item song but that doesn't have the flair to pull it off.

Duniya, then, is merely a channel for the newcomer cast to make it to the big screen. The boys have the zeal to perform, but need a decent director. The girls have hardly anything to do. Miscellaneous actors, including the one playing the police officer, the actor playing the terrorist Noor Shah, and the woman playing the journalist, are good.

Watch Duniya only if someone you know is starring in it. On second thought, don't.
Share. Save. Connect.
Tweet
DUNIYA SNAPSHOT

ADVERTISEMENT
This page was tagged for
duniya telugu movie download
Duniya telugu movie
Duniya reviews
release date
Kranti, Nishanth
Follow @fullhyderabad
Follow fullhyd.com on
About Hyderabad
The Hyderabad Community
Improve fullhyd.com
More
Our Other Local Guides
Our other sites
© Copyright 1999-2009 LRR Technologies (Hyderabad), Pvt Ltd. All rights reserved. fullhyd, fullhyderabad, Welcome To The Neighbourhood are trademarks of LRR Technologies (Hyderabad) Pvt Ltd. The textual, graphic, audio and audiovisual material in this site is protected by copyright law. You may not copy, distribute, or use this material except as necessary for your personal, non-commercial use. Any trademarks are the properties of their respective owners. More on Hyderabad, India. Jobs in Hyderabad.