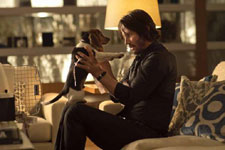 Kritika Deval / fullhyd.com
EDITOR RATING
6.5
Performances
Script
Music/Soundtrack
Visuals
7.5
6.0
8.0
9.0
Suggestions
Can watch again
Yes
Good for kids
No
Good for dates
No
Wait to rent it
No
So, a Russian mobster kills Keanu Reeves' puppy and steals his Mustang, and Reeves retaliates by shooting down the whole frickin' gang. Wow, that was a fun sentence to say. What is even more amazing is that that actually is all that is there to John Wick. No, really.

Sure, there is a bit of a backstory about how John Wick (Keanu Reeves) used to be an assassin for Viggo Tarasov (Michael Nyqvist) until he fell in love with Helen (Bridget Moynahan) who he then had to nurse through a protracted battle with cancer until she died and left John the little beagle that met the aforementioned gruesome fate. However, none of any of this seems to have anything to do with what not even the most generous of souls would call a plot. You see, instead of a story, stunt experts Chad Stahelski and David Leitch have bestowed upon John Wick a series of gun-based haikus that culminate in a Boss Fight, which might not be particularly edifying but is nevertheless a whole lot of fun. i. e., if your idea of fun is watching an improbable number of people get shot down in equally improbable ways.

In other words, Keanu Reeves is back, and with a vengeance. Literally. That this vengeance is wreaked for the death of a dog, however adorable, instead of a more probable set-up that could've been concocted involving the wife, is just one of several ways in which John Wick refuses to be taken seriously. Says mob boss Viggo to his son Iosef Tarasov (Alfie Allen), "You don't mess with Wick! I once saw him kill three men with a (@&?#%!*) pencil!" Or something along those lines, this writer being too busy laughing to have paid too much attention.

Nevertheless, for all its attempts at subversion, the film is too devoid of any ideas other than "this seems like fun, let's stick in there" to get much credit for any real thought. The movie is crammed full of nods and hi-fives to such inspirations as retro video games, Jean-Pierre Melville, and nearly every single movie where Reeves has done nothing more than play Reeves, which is exactly what Reeves does here, too.

And Reeves does so with such panache that, amid all of the elegantly minimalistic gun-fu, and the masterful crescendo to which the action is built, you barely notice that the rest of the cast, except for Nyqvist, exists merely to turn Sad Keanu into Bad and thoroughly Mad Keanu. Even Nyqvist seems sadly insufficient for all that Keanu's character feels compelled to give up on his trusty guns and take on this grand old man the old fashioned way.

None of this matters, of course, as you hold on to your seat's edge in anticipation of the carnage that is hinted at in the prologue. While the finer points of plot construction might be lost on the film's debut filmmakers, the action sequences, which make up most of it, are executed with all of the style, nonchalance, and utter abandon that you could wish for.

Nyqvist and William Dafoe add to the retro vibe of the film, quite adorably invested in their characters. Alfie Allen goes from assured to weak in just the right manner. Adrianne Palicki as one of Viggo's hench-, er, women, does her best to make her feminine presence felt in a space where she's almost certainly an afterthought. The rest of the cast do their best in a film where any and all thespic prowess is a matter of indifference. The visuals are extremely stylized and provide much of the film's feel of urgency, with the background score providing the appropriate heightening effect.

John Wick is grandiose, cheesy, ridiculous fun. If you have a hankering for retro gore, and wish to banish the memory of Reeves circa the disastrous 47 Ronin, John Wick is exactly what you need. If you're looking to test your grey matter further, you've stumbled upon the wrong page.
Share. Save. Connect.
Tweet
JOHN WICK SNAPSHOT 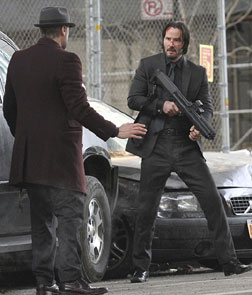 ADVERTISEMENT
This page was tagged for
John Wick english movie
John Wick reviews
release date
Keanu Reeves, Michael Nyqvist
theatres list
Follow @fullhyderabad
Follow fullhyd.com on
About Hyderabad
The Hyderabad Community
Improve fullhyd.com
More
Our Other Local Guides
Our other sites
© Copyright 1999-2009 LRR Technologies (Hyderabad), Pvt Ltd. All rights reserved. fullhyd, fullhyderabad, Welcome To The Neighbourhood are trademarks of LRR Technologies (Hyderabad) Pvt Ltd. The textual, graphic, audio and audiovisual material in this site is protected by copyright law. You may not copy, distribute, or use this material except as necessary for your personal, non-commercial use. Any trademarks are the properties of their respective owners. More on Hyderabad, India. Jobs in Hyderabad.