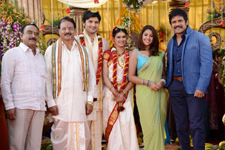 Ravi Kandala / fullhyd.com
EDITOR RATING
3.0
Performances
Script
Music/Soundtrack
Visuals
3.0
3.0
3.0
5.0
Suggestions
Can watch again
No
Good for kids
No
Good for dates
No
Wait for OTT
No
A movie is typically good when you can identify with the characters on screen and feel the same way that they do. Examples would be most of Rajamouli's movies where he builds up the villainy to such an extent that when the villain and the hero come face-to-face, you are rooting for the hero to maul the villain.

Trust us when we tell you we had tears in our eyes and were left wondering if the characters on screen were mouthing mere dialogues or our actual thoughts.

Bhai, Nagarjuna's latest venture, in which he plays a "stylish" don from Hongkong, is the very antithesis of style. The film's plot is older than the Himalayas (which, in the course of our research we found out, are more than 450 million years old). The devices used to take the plot forward are even older. The elder brother who separated from his family long ago, is recognized by his sister by the tune he plays on his mouth organ (yes, the people who made Sudigadu were not joking about Telugu films).

The film's plot is also stupendously similar to Akshay Kumar's Boss which released and tanked like nobody's business. There is a father who is the epitome of good, who kills a boy by mistake. The good son, named Vijay (cliché 1), owns up to the murder and goes to jail. He also makes his uncle (Paruchuri) promise that he will not reveal the truth to any one (cliché 2).

Vijay then disappears from the village and surfaces as a don in Hongkong. Bhai, as he is known now, is sharper than a knife, faster than a bullet and more dangerous than a live bomb, has a golden heart, and is more weirdly dressed than King Kong. He also walks around with four lingerie-clad girls and four overdressed boys carrying guns (clichés 3-11 - one for each follower).

Bhai comes to Hyderabad to kill an undercover cop who is destroying the mafia there. Right when he is about to pull the trigger, he realizes that the cop is his brother (clichés 12-52 - do you really want a justification for the count?).

Bhai suddenly turns good and decides to protect his family. So he reunites with his sister first by playing a bachpan kaa tune on his mouth organ (clichés 53-1000) and then enters his home as a wedding planner (lost count now). How he wins over his family's heart and saves his brother from the mafia forms the rest of the flick.

Into this mix, director Veerabhadram Choudary throws in Ashish Vidyarthi, Sonu Sood, Ajay, Rahul Dev and Sayaji Shinde as the villains; Narsing Yadav, Fish Venkat and several others as the gang of sidekicks; Brahmanandam, Vennela Kishore, Raghu Babu, M S Narayana and tens of others in the comedy department; and Richa Gangopadhyay, Kamna Jethmalani, Hamsa Nandini and Nathalia Kaur in the actress/cameo and item girl departments. None of these actors has well-defined roles, and they are all wasted in one/two scene appearances that contribute nothing to the movie.

Nagarjuna looks bad in the first half, redeems himself in the second half in the looks department, and dances badly in songs in both halves. His acting chops are hardly required in a script that requires him to use only his wardrobe and collection of sunglasses. Richa Gangopadhyay, as mentioned earlier, has no expression whatsoever, and is irritating in the few scenes in which she appears.

DSP has obviously foisted some of his unused and discarded tunes on to the producer. The songs come up at random intervals and are unimaginatively picturised. Nagarjuna has obviously spent a lot of money on the film - it shows on screen - but it is largely wasted.

Bhai is old wine in old bottle (what? we can't use a cliché in our review?). It is sad to see Nagarjuna, an actor who has never flinched from experimenting, waste his time and money on such projects.
Share. Save. Connect.
Tweet
BHAI SNAPSHOT 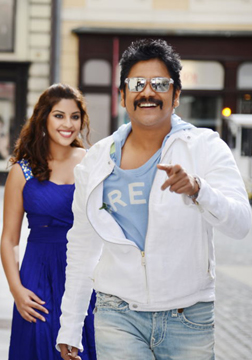 ADVERTISEMENT
This page was tagged for
Bhai telugu movie
Bhai reviews
release date
Nagarjuna, Richa Gangopadhyay
theatres list
Follow @fullhyderabad
Follow fullhyd.com on
About Hyderabad
The Hyderabad Community
Improve fullhyd.com
More
Our Other Local Guides
Our other sites
© Copyright 1999-2009 LRR Technologies (Hyderabad), Pvt Ltd. All rights reserved. fullhyd, fullhyderabad, Welcome To The Neighbourhood are trademarks of LRR Technologies (Hyderabad) Pvt Ltd. The textual, graphic, audio and audiovisual material in this site is protected by copyright law. You may not copy, distribute, or use this material except as necessary for your personal, non-commercial use. Any trademarks are the properties of their respective owners. More on Hyderabad, India. Jobs in Hyderabad.