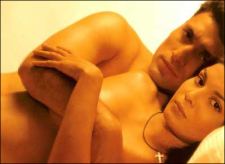 Rohit Murari / fullhyd.com
EDITOR RATING
1.0
Performances
Script
Music/Soundtrack
Visuals
NA
NA
NA
NA
Suggestions
Can watch again
NA
Good for kids
NA
Good for dates
NA
Wait for OTT
NA
Unlike most movies that come out of the Bollywood stables, Sins does not disclaim its inspiration from a real-life incident. It goes on to, however, state that the characters are a figment of the maker's imagination.

Set in small town Kerala, the movie revisits the incident that threatened to shake the very foundations of the Church in India - the amoral transgressions of a Catholic Priest with a woman much younger to him. A bold foray, indeed. Sadly, the movie attempts nothing beyond titillation. And it does not even succeed in that.

Father William (Shiny Ahuja) and Rosemary (Seema Rehmani) come across each other on the day Rosemary was rushing to get to her examination center. The Father gives her a ride in his car. Their meetings become frequent after that until one fateful day when they consummate their union, seemingly overcome by a wave of lust in a moment of weakness brought upon them by something as mundane as the screenplay of the movie. Really, get a life!

Rosemary goes not just through social ridicule but also multiple abortions during the course of their affair. When things get a little out of hand, Father William gets her married to Graham. However, there is a catch. Graham and Rosemary are not supposed to fall in love or make love to each other. This is so Rosemary and William can continue their affair under the garb of this sacred union.

But Rosemary and Graham do fall in love, and elope. Enraged at this turn of events, William murders Rosemary's mother. He also has Rosemary brutally hacked to death. In the end, he finds himself on Death Row.

The movie literally takes your sensibilities for a ride. It has gratuitous nudity, all of it completely unnecessary - it neither fulfills the objective of art nor of erotica. And the dialogues! Sample this conversation between the protagonists when Rosemary is ironing:

William: You have had your bath, haven't you?
Rosemary: Yes I have. I am almost done with my ironing.
William: You are, aren't you?

Puhlease! Who talks like this? Ending each statement with a question? That is not the end of it. Not even close. The dialogue-delivery makes you feel that you are watching a play, albeit a bad one. Shiny Ahuja is unconvincing in the part of a character who goes against every belief that he has stood for. Seema Rehmani plays her part pretty well.

Despite the controversy surrounding its release, it is going to take a miracle for the movie to run beyond a couple of weeks.
Share. Save. Connect.
Tweet
SINS SNAPSHOT

ADVERTISEMENT
This page was tagged for
Sins english movie
Sins reviews
release date
Shiny Ahuja, Seema Rehmani
theatres list
Follow @fullhyderabad
Follow fullhyd.com on
About Hyderabad
The Hyderabad Community
Improve fullhyd.com
More
Our Other Local Guides
Our other sites
© Copyright 1999-2009 LRR Technologies (Hyderabad), Pvt Ltd. All rights reserved. fullhyd, fullhyderabad, Welcome To The Neighbourhood are trademarks of LRR Technologies (Hyderabad) Pvt Ltd. The textual, graphic, audio and audiovisual material in this site is protected by copyright law. You may not copy, distribute, or use this material except as necessary for your personal, non-commercial use. Any trademarks are the properties of their respective owners. More on Hyderabad, India. Jobs in Hyderabad.