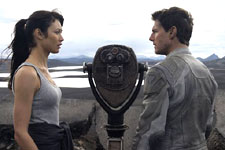 Kritika Deval / fullhyd.com
EDITOR RATING
5.0
Performances
Script
Music/Soundtrack
Visuals
6.0
5.0
6.0
7.0
Suggestions
Can watch again
No
Good for kids
No
Good for dates
Yes
Wait for OTT
No
An individual person changes. Often. And consistently. A child of 6 wants things distinct from a teenager of 16. And so it is with the teenager and an adult of 26. Mankind as a whole, however, seems to have gotten itself stuck in an unending loop, with the acquisition of power at its centre. The world of the homo sapien is not that much different in the 21st century than it was in the 2nd.

So, there's no reason to assume that 2077 will be that much different from 2013, except visually. What exactly is the point of this meandering soliloquy, you ask? Well, not much, except maybe that any surprises you can look forward to from Oblivion, will probably arise from the sheer number of sci-fi clich¨¦ crammed into yet another post-apocalyptic world.

In case you didn't get it, the year is 2077. And the place, a sleek little Jetsons-ish house thousands of feet above a barren earth that is being milked of its final share of resources.

This stylish abode is inhabited by drone repairman Jack 49 (Tom Cruise), and his spooky girlfriend Victoria (Andrea Riseborough). He fixes things that destroy scavs, alien creatures that played dirty during a human-scav war, and destroyed the moon, thus destroying the Earth.

Ingrate that he is, Jack wants more than his idyllic life in the Jetson house, namely a strange woman he sees in his dreams (Olga Kurylenko). Funnily, he finds her frozen in a time-capsule, and then lands smack dab into the middle of an insurgency against what seems like a high-profile conspiracy, making him question everything that he thinks he believes post his memory wipe.

Wait, what memory wipe? Oh yeah, the one Jack had five years ago as part of ¶?ecurity precautions What security precautions? Don't ask us, ask Kosinski. He's the one who made the film. On second thoughts, don't ask him, either. He seems to have forgotten all about it.

As you can see from the story so far, Kosinski has gone for big ideas. Themes span the destructive nature of consumerism, the all-consuming nature of power, the sheep-like nature of the average person, and several others that seems like the products of lots drawn from all the major issues dealt with in contemporary sci-fi.
But the ideas remain hollow as the substance takes up barely any space, the makers having decided to favour spectacle over substance.

And my oh my, what a spectacle it is, too. Kosinski's post-apocalypse is no barren, decayed landscape, but a bright, sleek and stylish one. Most of the action takes place in a sunny blue sky. And it all looks lovely. The soundtrack keeps time with the frantic, but eventually unconvincing, action taking place on the screen.

If you are assailed by constant feelings of deja vu, it's your fault for having seen too much sci-fi. At least you'll be vu-ing the deja in an excellently executed scenario. And there are all the guns and the robots and the explosions to keep you from thinking too much.

Cruise, Olga Kurylenko, Morgan Freeman and the rest, do as good a job as is required of them. Any more effort than that would've been superfluous.

All in all, Oblivion is a fun summer watch. Don't expect to be blown away, and you'll do just fine.
Share. Save. Connect.
Tweet
OBLIVION SNAPSHOT 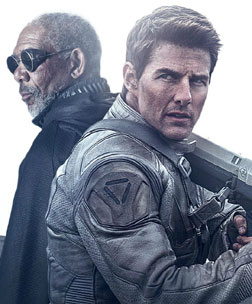 ADVERTISEMENT
This page was tagged for
Oblivion english movie
Oblivion reviews
release date
Tom Cruise, Morgan Freeman
theatres list
Follow @fullhyderabad
Follow fullhyd.com on
About Hyderabad
The Hyderabad Community
Improve fullhyd.com
More
Our Other Local Guides
Our other sites
© Copyright 1999-2009 LRR Technologies (Hyderabad), Pvt Ltd. All rights reserved. fullhyd, fullhyderabad, Welcome To The Neighbourhood are trademarks of LRR Technologies (Hyderabad) Pvt Ltd. The textual, graphic, audio and audiovisual material in this site is protected by copyright law. You may not copy, distribute, or use this material except as necessary for your personal, non-commercial use. Any trademarks are the properties of their respective owners. More on Hyderabad, India. Jobs in Hyderabad.