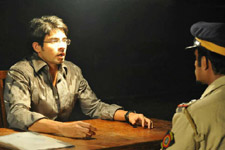 Nupur Barua / fullhyd.com
EDITOR RATING
6.0
Performances
Script
Music/Soundtrack
Visuals
6.0
5.0
4.0
6.0
Suggestions
Can watch again
Yes
Good for kids
No
Good for dates
Yes
Wait for OTT
No
In a recent interview, actor Hussain Kuwajerwala said that Shree's genre excited him when he first read the script, and that he agreed to be a part of this movie because he thought like-minded people would appreciate it. Appreciation is a given, but there may not be too many movie buffs who share the same wavelength as Hussain and director Rajesh Bachchani. In short, Shree is an offbeat movie, categorised under sci-fi. Unfortunately, it is a little tackily made (a result of budget constraints, perhaps?).

The story goes like this. Shree (Hussain Kuwajerwala) is an accountant in a telecommunications company. He is originally from Meerut, and so far, life in Mumbai has not been easy. His Maharashtrian girlfriend, Sonu (Anjali Patil), lives in the same area, and the couple have constant arguments because they do not have enough money (or prospects) to begin a new life.

One warm April evening, Shree is summoned, much to his surprise, to his boss's farmhouse. His boss is the tycoon Randhawa (Rio Kapadia), and he offers the awed Shree the position of regional head of the telecommunications company, as well as an obscene amount of money, because Shree is the "Chosen One". All that the young man has to do is trade in 12 hours of his life for an "experiment".

Shree refuses, initially, but the promise of wealth and subsequent eradication of personal complications becomes too much to resist. He then returns to the farmhouse, where he is drugged and left unconscious.

After he comes to, Shree finds himself in strange surroundings, and manages to escape. He now has to piece together the last few hours or so of his life, about which he seems to have no idea. He has to figure out what exactly Randhawa wanted him to do.

The script is tight, leaving no room for distraction. The only problem, then, is logic. It is a science fiction movie, and fanatics will find plenty of loopholes to pick on. And it is also a thriller, so fans of that genre may think that the clichéd clues and the red herrings are predictable as devices to further the plot.

Although the experiment is explained in detail, it is almost incomprehensible, despite the graphics. And the scene where Hussain explains how he knows who the real villain is - it is almost amateur, in terms of writing.

The biggest flaw, besides the unintentionally funny serious dialogues, is the production design. You are not allowed to forget that the movie is financed by the company that owns Ciemme Jewellery - the banner is everywhere - billboards, shops, screens, you name it. Besides, Shree's room and Randhawa's farmhouse border on the shoddy.

Interestingly, however, the live locations are shot well, especially a few chase sequences and scenes in the chawl - the cinematography is striking in parts. Costumes are ill-fitting, and music is average.

Hussain Kuwajerwala is definitely the star of the movie. He is confident, and may become the next big star from television (after Rajeev Khandelwal and Sushant Singh Rajput). He does a kind of item number during the end credits, and it leaves a bitter taste in your mouth - he is a great dancer, but suddenly you cannot remember what the man Shree was all about.

Anjali Patil is by far the most irritating element in the movie. She overacts and screeches all the time. In fact, you may miss the point of the sequences that she appears in - she is that distracting.

The actor who plays her mother does a better job of portraying a middle-class Maharashtrian woman. Paresh Ganatra breaking out into Marathi now and then is a delight. He plays the role of a sleazy cop.

Rio Kapadia is decidedly uncomfortable in most of his scenes, but he manages to impress. Shivani Tanksale is perfect for her role, and her talent is obvious (if only her costumes were better!).

Shree is the first Indian movie in the sci-fi genre that makes an interesting watch. As mentioned earlier, the story has many laughable gaffes, but it is a pioneer of sorts in small-budget films. It may attract only the multiplex crowd, although they would prefer Hollywood films on similar subjects. Even if you are not a huge Hussain fan (and he has been missing in action for a while), you must still watch it because a man named Rajesh Bachchani followed his heart and gave us a movie that cannot be ignored.
Share. Save. Connect.
Tweet
SHREE SNAPSHOT 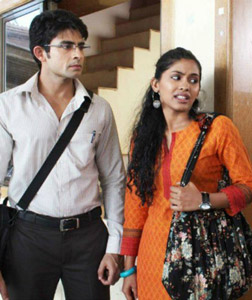 ADVERTISEMENT
This page was tagged for
Shree hindi movie
Shree reviews
release date
Hussain Kuwajerwala, Paresh Ganatra
theatres list
Follow @fullhyderabad
Follow fullhyd.com on
About Hyderabad
The Hyderabad Community
Improve fullhyd.com
More
Our Other Local Guides
Our other sites
© Copyright 1999-2009 LRR Technologies (Hyderabad), Pvt Ltd. All rights reserved. fullhyd, fullhyderabad, Welcome To The Neighbourhood are trademarks of LRR Technologies (Hyderabad) Pvt Ltd. The textual, graphic, audio and audiovisual material in this site is protected by copyright law. You may not copy, distribute, or use this material except as necessary for your personal, non-commercial use. Any trademarks are the properties of their respective owners. More on Hyderabad, India. Jobs in Hyderabad.