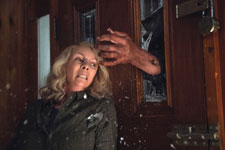 T J Reddy / fullhyd.com
EDITOR RATING
5.0
Performances
Script
Music/Soundtrack
Visuals
6.0
5.0
8.0
7.0
Suggestions
Can watch again
No
Good for kids
No
Good for dates
Yes
Wait to rent it
Yes
1978's Halloween is one of the original slasher films from a time gone by, and Michael Myers is its sister-slaying, babysitter-murdering antagonist. One would assume we'd sympathise with Myers' many victims, but on the contrary our sympathies lay with Myers himself. This iconic character went from being a force of pure evil to being roundhouse-kicked by Busta Rhymes, outsmarted by LL Cool J, and forced to deal with whatever the hell Rob Zombie's White Horse was all about.

Four decades after the original, the duo of Danny McBride and David Gordon Green come together to right some of those wrongs and restore Myers to his place atop the list of horror movie villains. They do this by erasing the events of nine other films off the franchise's slate and making their film a direct sequel to the original.

Taking a page out of Rob Zombie's 2006 reboot, Green and McBride add a layer of psychological intrigue to their film. The filmmakers attempt to dissect the mindsets of both the victim (Strode) and the victimiser (Myers), and the lasting effects the incidents from 1978 had on them as people. The film achieves this end by means of a couple of podcasters. Their questions are relatable, and their findings are captivating. But you didn't come here for an analysis on the origins and effects of evil - you'd have watched We Need To Talk About Kevin if that were your primary goal. You came here for this franchise's hallmarks - bloodshed, gore, topless ladies and a hyper-contrived mechanism conceived by the protagonists to keep the Bogeyman dormant until the inevitable sequel.

This film displays all four of its trademarks with varying amounts of screen time dedicated to them, and to varying degrees of success. The plethora of slasher films that have made their way to screens since the '70s has used the original Halloween as a template for storytelling. Films from the Elm Street, Friday The 13th, Texas Chainsaw Massacre, Wrong Turn, Child's Play, Scream and Saw franchises have all worked at making the kills more over-the-top, the characters more ludicrous and plotlines more throwaway. Halloween tries to individualize itself by keeping the gore to a minimum and giving its characters centre-stage.

However, once the film veers away from exploring the similarities and dichotomy shared by Myers and Strode, the supporting cast and their journeys are not compelling or fleshed out enough to hold your attention. The most blatant example of a lost opportunity comes in the form of Dr Sartain, a stand-in for Donald Pleasance's Dr Sam Loomis. The good doctor's compulsive need to relate to and embody the evil Myers represents has all the outlines of a three-dimensional character but the writers forget to fill said outline with an adequate amount of colour and shading. Haluk Bilginer's supremely hammy performance does the character no favours either.

While the character of Dr Sartain is consistent in tone and presentation, Strode's daughter Karen played by Judy Greer and granddaughter Allyson played by Andi Matichak experience wild shifts in character without a through line influencing their journeys. The actors themselves deserve a great deal of credit for keeping their characters from morphing into grating nincompoops, but anyone not named Jamie Lee Curtis has a snowball's chance in hell of coming out of this film with a memorable performance of any sort.

On a side note, Nick Castle reprising his role as Myers is a nice touch.

Likewise, John Carpenter, himself, shows that the old warhorses still have some gallop left in their hooves. Many have tried to recreate and recapture Carpenter's inimitable score for his 1978 film, but the master returns to the fray to show the littluns how it's done. Barring in one scene, Carpenter's score and the control it has on the film's tone is mesmeric. However, this is only technical call-back to the original that fires on all cylinders.

Almost every kill in this film references a murder from the original in one form or the other. With very little in terms of identity added to those kills, these scenes beg to be compared to their predecessor, and in turn show a lack in the finesse and the razor-sharp focus the original provided in spades.

While wrestling between stamping their authority by presenting a fresh take on the long-standing franchise and paying adequate homage to the four-decade-old classic, Green, McBride and their crew create a movie that is neither bad nor good nor so bad it's good. This is a middling yet worthy entry to a franchise that, much like its villain, refuses to die.
Share. Save. Connect.
Tweet
HALLOWEEN SNAPSHOT 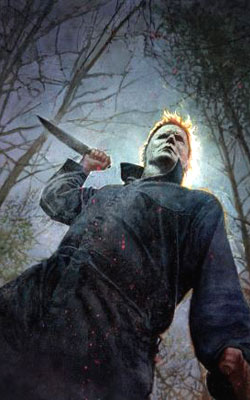 ADVERTISEMENT
This page was tagged for
Halloween english movie
Halloween reviews
release date
Jamie Lee Curtis, Judy Greer
theatres list
Follow @fullhyderabad
Follow fullhyd.com on
About Hyderabad
The Hyderabad Community
Improve fullhyd.com
More
Our Other Local Guides
Our other sites
© Copyright 1999-2009 LRR Technologies (Hyderabad), Pvt Ltd. All rights reserved. fullhyd, fullhyderabad, Welcome To The Neighbourhood are trademarks of LRR Technologies (Hyderabad) Pvt Ltd. The textual, graphic, audio and audiovisual material in this site is protected by copyright law. You may not copy, distribute, or use this material except as necessary for your personal, non-commercial use. Any trademarks are the properties of their respective owners. More on Hyderabad, India. Jobs in Hyderabad.