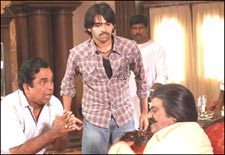 EDITOR RATING
7.0
Performances
Script
Music/Soundtrack
Visuals
8.5
8.0
7.0
7.0
Suggestions
Can watch again
Yes
Good for kids
Yes
Good for dates
Yes
Wait to rent it
No
The instinctive reaction for most of us upon watching a quick-witted hero thinking brilliantly on his feet in Catch-22 situations, is thinking that it is possible - and that, heck, even we can do it if we practise enough in some way. Even if we do not know a single person in real life who can do that.

Ready is such an impossible tale, but its brilliance lies in how possible it looks, thanks to a remarkable scripting effort. The coincidences are Wodehouse-ian in the dexterity with which they are made to happen, the plotting is almost flawless, the performances - especially by Brahmanandam who starts believing he is the creator, and the kid Bharat Kumar who plays Jayaprakash Reddy's grandson and mini-factionist - are benchmarks, and on the whole this is one of the most complete family entertainers of recent times.

Chandu (Ram) is the scion of a business family, and in an attempt to help a friend get his love, kidnaps the wrong girl Pooja (Genelia) just about to get married. Pooja is delighted since she was being forced into the marriage anyway, and on a trek to get her to Kurnool, the couple fall in love.

Chandu gets Pooja to stay at his home on a flimsy pretext, and she gells well with his joint family, but she is kidnapped again by Pedarayudu (Kota), her evil uncle who is after her property and wants her to marry his son. Aiming for the same is evil uncle no. 2 Chitti Rayudu (Jayaprakash Reddy), and Chandu has to rescue his love by playing with the heads of these 2 powerful warlords.

The second half of the film is where most of its innovativeness lies, as the wily Chandu lands as the assistant of McDowell Murthy (Brahmanandam), the auditor for both the warring uncles. He executes a cunning masterplan fraught with risk and a comedy of errors, as he aims to get the uncles to accede to the marriage.

Ready is marked, as we said, by some true comic genius in scripting, and excellent performances by the comic greats of Tollywood, notably Brahmanandam. After the roles of Charygaru in Dhee (another Srinu Vaitla movie) and Bobby in Krishna, he gives a rip-roaring performance again as McDowell Murthy (and don't ask about that name), showing just why it is always a great idea to give him a full role rather than a cameo. You may find McDowell Murthy similar Charygaru, but you'll hardly mind it, since most of us didn't get enough of Charygaru anyway.

Next in line is Bharat Kumar, the kid who plays Jayaprakash Reddy's grandson - the exceptionally energetic performance by the young gun lightens up a good chunk of the second half. Ram is improving as an actor, and is almost par for the course for the role, while Genelia is her usual expressive self is a role that merely flanks the mainstream tale. Sunil's role is more about mannerisms, and that can bore you after the introductory giggles it elicits.

The film moves from a rather plebian first half to a more engaging second, and while it has its share of stuff that make it a mere movie - for example, those Spiderman and Krishh bits, and that old scourge of Telugu films, the fights - it has plenty to more than make up. The music (by Devi Sri Prasad) is the kind that can grow on you if you are forced to listen to it several times, which appears likely since the film itself should do quite well.

Ready is a fine piece of movie-making, and feel free watch it with your entire family for a fine weekend outing.
Share. Save. Connect.
Tweet
READY SNAPSHOT

See Ready full details
READY USER REVIEWS
1 - 9 OF 9 COMMENTS
POSITIVE  |  NEGATIVE |  NEWEST  |  OLDEST  |  MOST HELPFUL  |  LEAST HELPFUL
USER RATING
7.7
11 USERS
Performances
Script
Music/Soundtrack
Visuals
7.8
8.2
6.3
6.6
Can watch again - Yes
Good for kids - Yes
Good for dates - Yes
Wait to rent it - Unsure
sri240 on 25th Aug 2008, 4:23pm | Permalink
Listeneing to the verdicts given by freinds....
went to the movie with high expectations ..esp ..
comedy of brahmanadam was really highlighted by all....
eventually i found out...it turned out to be routine fare from him..
on the flip side RAM gave his evrything...and looks wise also he is lot better than his earlier fims..
Genelia is steroe type with her action...

The reviewer is absolutely on the money. Many parts in the second half of the movie are absolutely Wodehouse-ian. You could imagine Uncle Fred dishing out his stuff, all high and plentiful during one of his excesses in London.

Ram does to Bramhanandam, what Uncle Fred does to Pongo ! Makes him shake like an aspen and go absolutely raving mad :), lol....

This movie is a winner on all counts.Come, lets throng the theatres....

RATING
9
Sandeep Jakkaraju on 5th Aug 2008, 2:12pm | Permalink
The movie is pretty ok...good family entertainer....not many fights or crime scenes...very well thought out movie....
RATING
7
its_vinay on 1st Aug 2008, 1:48am | Permalink
Surely a decent family entertainer.....worth watching....
Even though there are some negative points in the movie it is one of the best movies in telugu in recent times.While watching the movie you feel that it might be a continuation to the Dhee movie becoz the script style and narration is similar to that.First half of the is ok type but second half really rocks with many funny characters.Brahmi, Fat boy and his mother these three characters did well in the second half and other characters did their job well.

Thanks to Sreenu vytla for such a humourous movie and if he concentrates more on first half of the movie and songs surely this movie also becomes a biigest hit in telugu industry.

Njoyyyyyy.......
Mungalla Rama Krishna on 15th Jul 2008, 11:14am | Permalink
Super movie its a good family entertainer. I wish this movie is going to create new records and is going to run upto above 300 days in Hyderabad.


Pros: Action
Cons: Comedy
RATING
10
Movie lover on 25th Jun 2008, 12:23pm | Permalink
The movie is worth watching. Ram looks good. Second half is too good. Not much violence. Fights are good. No murders and no hypes. Only pure comedy. Music is a drawback for this movie.


Pros: Comedy and Ram
Cons: Music is bad
RATING
7
uncle pai on 25th Jun 2008, 9:54am | Permalink
@xlnc: ratings are intended for the audiences for which a product is made.. the average telugu cinema viewer will love ready's script for its not infrequent moments of ingenious plotting -and no, dhee wasn't in this league.
XLNC on 25th Jun 2008, 9:12am | Permalink
Well, I don't understand how this movie got an 8/10 for script!! I mean more than half the movies that are made each other are quite the same... I mean this movie is like a mix of Jab We Met, Okkadu, Bommarillu and a million other movies.

The first half is really annoying. We expect the movie to start off somewhere but things get back to where they started off by the interval! The comedy is pretty good and that is what could sustain this movie. The songs by Devi Sri Prasad are similar to any other song he has previously composed.

Since there are no other movies coming up in the near future with a great starcast and huge hype, its good to give it a watch. But seriously DHEE was a better concept and had an even better script!!

ADVERTISEMENT
This page was tagged for
Ready telugu movie
Ready reviews
release date
Ram, Genelia
theatres list
Follow @fullhyderabad
Follow fullhyd.com on
About Hyderabad
The Hyderabad Community
Improve fullhyd.com
More
Our Other Local Guides
Our other sites
© Copyright 1999-2009 LRR Technologies (Hyderabad), Pvt Ltd. All rights reserved. fullhyd, fullhyderabad, Welcome To The Neighbourhood are trademarks of LRR Technologies (Hyderabad) Pvt Ltd. The textual, graphic, audio and audiovisual material in this site is protected by copyright law. You may not copy, distribute, or use this material except as necessary for your personal, non-commercial use. Any trademarks are the properties of their respective owners. More on Hyderabad, India. Jobs in Hyderabad.