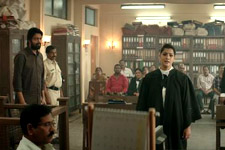 Anil Bandhakavi / fullhyd.com
EDITOR RATING
4.0
Performances
Script
Music/Soundtrack
Visuals
6.0
2.0
3.5
6.5
Suggestions
Can watch again
No
Good for kids
No
Good for dates
No
Wait to rent it
Yes
Benjamin Franklin is known to have said, "It is better 100 guilty persons should escape than that one innocent person should suffer." Naandhi amplifies this message in a movie that addresses slack and corruption in the judicial system. Directed by Vijay Kanakamedala, this crime thriller casts Allari Naresh as the lead who's falsely accused of murder and is dragged through a long and arduous battle for justice.

The film begins with Bandi Surya Prakash (Allari Naresh) being remanded for 14 days in an ongoing trial in which he's accused of the murder of a well-known political figure. He shares a cell with Radha Prakash (Priyadarshi Pulikonda) who's in for a petty offence. Radha witnesses a deep sorrow in Surya that spikes his curiosity, but he fails to get him to speak up. Eventually, Surya confides in Radha with his backstory.

A few years prior, all was perfect in Surya's life. A promising career was taking off for him in the IT field, he was able to gift his parents with the little joys that they sacrificed along the way for his education, and he also found the love of his life.

Meanwhile, Inspector Kishore (Harish Uthaman) was receiving heat for his lack of progress in locating a suspect in a high-profile homicide case. After three days of searching, he narrows down on Surya, who's dumbfounded and pleads his innocence. Kishore is however hell-bent on incriminating Surya.

Surya explains to Radha how he slowly got sucked into a web of inexplicable complications within the judicial system. Five years had passed with him awaiting a fair trial, a duration in which he lost everything he treasured - his parents, his wife and his reputation.

It turns out that Radha was planted by Aadhya (Varalaxmi Sarathkumar) who has taken interest in Surya's case and is set on fighting for his freedom. Aadhya wins the case and convinces Surya to file a counter-case under section 211 of the penal code in which Inspector Kishore can be implicated for falsely accusing Surya for a crime he did not commit.

Surya and Aadhya, ignoring the risks to their very lives, team up to fight for change using Surya's case an example. In the process of gathering evidence to prove the falsity of Kishore's allegation, Surya and Aadhya witness shocking revelations about the murder, and are exposed to the corrupt dealings that went on before Surya was unjustly implicated.

Naandhi hits relatively hard upon your sentiments in its portrayal of a man who unjustly loses everything after being targeted for a crime he did not commit. However, it falls quite short of the mark in delivering the thrill and inspiration that are crucial in order to drive its point home.

Much of the writing around Surya's case in the film is quite implausible. Surya is accused of murder based on three CCTV clips that would definitely not serve as sufficient evidence in any real court of law. Then, in the initial stages of the trial, Surya is not even afforded a lawyer to take up his case as the prosecutor claims that the association of lawyers had decided that Surya may not be represented by anyone as the victim of the murder was a lawyer himself - a convenient shortcut to demonstrate the weight of the corrupt judicial system crashing in on Surya, but mostly for the very credulous. And he's also freed just as sloppily as he's accused of murder, after Aadhya makes extremely simple arguments on his behalf. Of course, evidence also conveniently pops up when needed.

One would have to reconcile with this lack of effort in crafting a smart and thrilling story that ties in well, by accepting that the message was more important than the execution. However, at many points, it seems as though Surya is not really up against a corrupt system, but really just against a corrupt individual that he's fighting.

Tt's hard to ignore all these major scripting faux pas and still somehow extract inspiration from this battle against corruption. So it's no surprise that the clearly recognizable moments in the movie meant to serve this purpose - the high-flown monologues and exchanges - slip by in lacklustre fashion. In these instances, the film almost feels like a B-grade version of the real thing.

The movie's saving grace comes from the performances that demonstrate professionalism, and the cinematography and editing that remind you that this is, in fact, a proper production. Allari Naresh manages to connect with the audience's sentiments - furnishing the key aspect that holds this film together - in a performance that's quite different from his general forte of comedy. Harish Uthaman too deserves mention for his commendable performance as Inspector Kishore.

Ultimately, Naandhi is a tough sell to convince you to make a trip to the movies. The film attempts to send across a strong message about corruption within the judicial system, but only conveys a long and uninspiring duel between a corrupt police officer and his innocent target. You might as well wait for it to show up on an OTT platform and get all those bathroom breaks.
Share. Save. Connect.
Tweet
NAANDHI SNAPSHOT 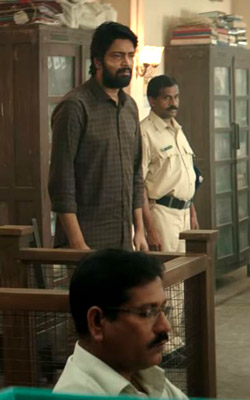 ADVERTISEMENT
This page was tagged for
Naandhi telugu movie
Naandhi reviews
release date
Allari Naresh, Varalaxmi Sarathkumar
theatres list
Follow @fullhyderabad
Follow fullhyd.com on
About Hyderabad
The Hyderabad Community
Improve fullhyd.com
More
Our Other Local Guides
Our other sites
© Copyright 1999-2009 LRR Technologies (Hyderabad), Pvt Ltd. All rights reserved. fullhyd, fullhyderabad, Welcome To The Neighbourhood are trademarks of LRR Technologies (Hyderabad) Pvt Ltd. The textual, graphic, audio and audiovisual material in this site is protected by copyright law. You may not copy, distribute, or use this material except as necessary for your personal, non-commercial use. Any trademarks are the properties of their respective owners. More on Hyderabad, India. Jobs in Hyderabad.