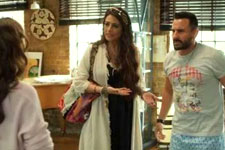 Punarvasu Pendse / fullhyd.com
EDITOR RATING
6.0
Performances
Script
Music/Soundtrack
Visuals
7.0
6.0
3.0
6.0
Suggestions
Can watch again
No
Good for kids
No
Good for dates
Yes
Wait to rent it
No
We have to admit, we did not go into this movie with many expectations to begin with. That made Jawaani Jaaneman a pleasant surprise - we booked a late night show, and a recliner, but dozing off was never an option (not that this reviewer actually ever sleeps in a theatre - he's dutifully reviewed even this excuse for a film conscientiously).

Director Nitin Kakkar, known for his entertaining debut film Filmistaan, is the helmer of this one, and manages to keep the tone of the movie fun and peppy, for the most while. Jawaani Jaaneman is a remake of 2010 Argentinian comedy Igualita A Mi, and it portrays the journey of a man who refuses to acknowledge his age, by maintaining that monogamy and settling down would be his demise.

Middle-aged Casanova Jaswinder 'Jazz' Singh (Saif Ali Khan) brings home a girl from his usual haunt, a nightclub owned by his friend Rocky (Chunky Pandey) - no departure from his standard hedonistic lifestyle. Only this time around, the girl, Tia (Alaya Furniturewala), drops a bomb on him - that there is a 33.33% chance that he is her father.

Jazz reacts as you would expect - all hell breaks loose for this 40/50-something bachelor. A casual fling with the delightfully weird Ananya (Tabu) in Amsterdam over twenty years ago resulted in an offspring, he gathers - an offspring who is now on a mission to get in touch with her biological father. And you are taken along for a fun ride as one man tries desperately to cling on to his responsibility-free, minimalist lifestyle while also wanting to do right by his newfound daughter.

Set in London, Jawaani Jaaneman will primarily find appeal in the metros, as it strays away from traditional family structures and dwells on a more unconventional approach to relationships. Jazz is the urban middle-aged lost guy, who tries to hold on to his freewheeling lifestyle a little too hard. What differs here is how the whole character is treated. There is very little stigma attached to singledom, or premarital sex, or having children out of wedlock - the entirety of the characters are accepting and generally comfortable with these concepts.

The end result is refreshing - you get to experience a story for its own sake with almost no attached lessons in morality. Almost, because there is an unnecessary take in the movie where the negative clichés about singledom are reinforced - but this is an exception rather than the norm. Concepts that many Indians find hard to fathom, like respecting the space of your loved ones, are introduced in a way that is indeed comforting - Jawaani Jaaneman is ultimately a feel-good movie.

However, despite it being good fun, not everything is perfect here. Jawaani Jaaneman suffers from long-drawn drama sequences at multiple points, and could have been much shorter with no effect on its plot. Singledom is still harped upon, and old-school romantic love is still idealised - albeit in a non-preachy way.

Despite the movie having three different music directors, the songs grate on the ears, with little to no originality. It poses the question: has Bollywood finally run out of fresh song-writing material, happy to stick with remixes of old chartbusters? Saif dancing to the revamped "2.0" version of his Ole Ole from Yeh Dillagi is perhaps the only memorable moment related to music in this otherwise entertaining film.

Speaking of Saif, the film is all about his character. He gets to play the modern, urban Indian - a role he is already comfortable with - and he is at ease here. Tabu's extended cameo brings out more than a few laughs. Her slow drawl and random muttering are hilarious.

Alaya Furniturewala, in her debut, is extremely charming as Saif's daughter Tia - and she easily holds up to him each time they are on the screen together. The rest of the extended cast is assured and helpful, and there is no character that seems over-the-top or out of place. This is a movie that is heavily dependent upon the chemistry of its actors, and the casting is spot-on.

All things considered, there are worse ways to spend a couple of hours than watching Jawaani Jaaneman. It doesn't drag on and is mostly entertaining, making it good enough for a one-time watch.
Share. Save. Connect.
Tweet
JAWAANI JAANEMAN SNAPSHOT 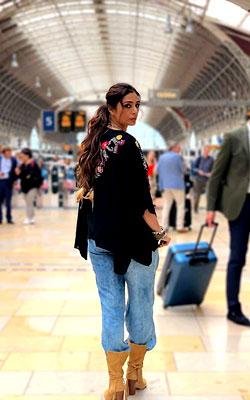 ADVERTISEMENT
This page was tagged for
Jawaani Jaaneman hindi movie
Jawaani Jaaneman reviews
release date
Saif Ali Khan, Tabu
theatres list
Follow @fullhyderabad
Follow fullhyd.com on
About Hyderabad
The Hyderabad Community
Improve fullhyd.com
More
Our Other Local Guides
Our other sites
© Copyright 1999-2009 LRR Technologies (Hyderabad), Pvt Ltd. All rights reserved. fullhyd, fullhyderabad, Welcome To The Neighbourhood are trademarks of LRR Technologies (Hyderabad) Pvt Ltd. The textual, graphic, audio and audiovisual material in this site is protected by copyright law. You may not copy, distribute, or use this material except as necessary for your personal, non-commercial use. Any trademarks are the properties of their respective owners. More on Hyderabad, India. Jobs in Hyderabad.