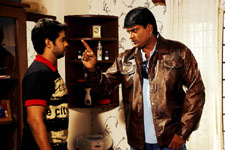 Pranita Jonnalagedda / fullhyd.com
EDITOR RATING
3.0
Performances
Script
Music/Soundtrack
Visuals
4.0
3.0
3.0
3.0
Suggestions
Can watch again
No
Good for kids
No
Good for dates
No
Wait to rent it
Yes
Kamina is officially being marketed as a remake of Johnny Gaddaar. However, to remake a thriller like Johnny Gaddaar, which was a hit, requires a lot more than just the story alone - for instance, a lead actor who can act (if not a Neil Nithin Mukesh, we wouldn't mind a Johnny Lever, at least). Kamina definitely suffers from a lack of a solid lead.

Further, given that this is a copy of a noir film, it does not have the crucial element of mystery that you expect. In his hurry to make Kamina a slick film, its director, Lakshmikantha Chenna, has actually made it quite frivolous.

The movie is the story of a gang of 5 - Siddharth (Krishi), Dharma (Sai Kumar), Kailash (Brahmaji), Teja (Aashish Vidyarthi) and Siva (Subbaraju) - who are partners at a gambling club. They also do some dirty-dealing. They concoct a plan that can make them some quick money, and each of them shells out some cash, in hopes of doubling it. Unfortunately, one of the group's members has other plans.

The magic that Johnny Gaddar wove was thanks to an efficient technical team, paired by skilled performances. But the Telugu version is left wanting in both these aspects.

Interesting though the concept is, the execution has bombed unpleasantly. A bad cinematographer, a slipshod editor and an unimaginative music director only add to its woes. Even something as simple as re-enacting exact scenes from the original has not been done well.

Also,the crucial element called continuity has gone for a toss in this production. The movie feels like a goods train - the bogies are connected, but loosely so.

Krishi, who reprises the role of Neil Nitin Mukesh in the original, debuts with this film. Sadly, his performance seems to be the kind that will slowly creep into oblivion. With so many experienced actors around him, his rawness is further amplified. Even his portrayal of "passion" looks feigned, and goes over to the extent of becoming clumsy.

Sai Kumar, Subbaraju, Brahmaji, Aashish Vidyarthi and Ravi Babu play their respective parts well, and you can say they have done a more-than-decent job. However, in the entire cast, it is Roja's performance that stands out. She is a breath of fresh air, and ensures that she does justice to what she delivers. But then, her role is inconclusive, and wastes her performance.

Overall, Kamina is a feeble attempt at remaking a good movie that actually worked. It is an interesting story gone awry, stuck with bad performances and worse technical values. There is nothing in it that thrills or chills. Enduring this movie for 2 hours is a Herculean task.
Share. Save. Connect.
Tweet
KAMINA SNAPSHOT 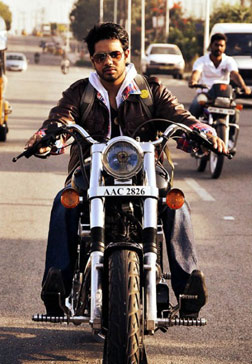 ADVERTISEMENT
This page was tagged for
kamina telugu movie
Kamina telugu movie
Kamina reviews
release date
Krishi, Sai Kumar
Follow @fullhyderabad
Follow fullhyd.com on
About Hyderabad
The Hyderabad Community
Improve fullhyd.com
More
Our Other Local Guides
Our other sites
© Copyright 1999-2009 LRR Technologies (Hyderabad), Pvt Ltd. All rights reserved. fullhyd, fullhyderabad, Welcome To The Neighbourhood are trademarks of LRR Technologies (Hyderabad) Pvt Ltd. The textual, graphic, audio and audiovisual material in this site is protected by copyright law. You may not copy, distribute, or use this material except as necessary for your personal, non-commercial use. Any trademarks are the properties of their respective owners. More on Hyderabad, India. Jobs in Hyderabad.