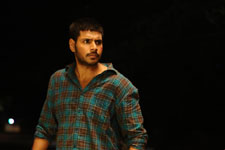 Spandana P / fullhyd.com
EDITOR RATING
7.0
Performances
Script
Music/Soundtrack
Visuals
7.0
9.0
8.0
7.0
Suggestions
Can watch again
Yes
Good for kids
No
Good for dates
Yes
Wait for OTT
No
Nagaram is a racy and taut affair, both on the screen and on your nerves. The usual grouse that we have about thriller films in general is that they either lose steam midway or end up trapped in their attempt to create uber-complicated plots and leave many loose ends that the audiences are left to deal with. Nagaram steers clear of any of those pitfalls, and maintains a remarkable tempo that never allows your pulse a dull moment.

A victim of a case of mistaken identity (Sri), an obsessed lover (Sundeep Kishan) keen on roughing up anyone to protect his lady love (Regina Cassandra), a good-hearted cabbie (Charle) and a reluctant abductor (Ramdoss) form the crux of Nagaram's plot. Among the primary cast, it is only Ramdoss who gets an onscreen name, and is called Winnings.

Sri, who is an immigrant to the city in search of a job, is manhandled and knocked down by a group of ruffians who mistake him for Sundeep. In his endeavor to get back his certificates which the group has snatched from him, he ends up being involved in further complications.

Meanwhile, Sundeep, who is hell-bent on getting his revenge on the guy who had previously gotten into a heated argument with him regarding Regina, severely hurts him in an acid attack, and is advised by his police officer uncle to abscond for a while.

In another track, in a grungy shack in another part of the city, a gang of kidnappers have picked up the wrong child owing to the amateurishness of Ramdoss, who took up the job though his heart was not in it. This kid happens to be the son of PKP (Madhusudan), who is like the you-know-who of the Chennai Gangsters Community.

Charle is meanwhile learning the tricks of surviving in a big city, and is on his first driving assignment.

How these four characters' lives intertwine through the conflation of the sub-plots and come a full circle at the dénouement is what keeps the frames rolling. The movie effortlessly zig-zags through the various sub-plots and characters, turning an otherwise complex script into a coherent piece of work that is smooth on screen.

What stands out about Nagaram is how it uses the mundane setting and going-ons of a typical urban city, nothing too flashy or dramatic, and manages to generate riveting circumstances amidst such ordinariness. Anticipation grips the viewer all through, and gets thicker with each maneuver the plot takes - though you may have a fair idea of what is in store next, there is still palpable tension.

Sri does a good job being a hapless youngster who is struggling to come to terms with the ways of a metro. Sundeep Kishan looks and acts tough, and is apt casting for the reckless young man he portrays. Regina does not have enough screentime to actually register a performance, but she looks good and does her best in a limited scope.

Ramdoss has a characterization that provides much ground for humor, and he rises up to it and provides the much-needed comic interludes in an otherwise dark script. A particular scene in which he demands his ransom while shaking from head to toe evokes some laughs. Charle, too, does a decent job as a guy who goes out of his way to help people.

The screenplay is the heart of the movie, as it is with any thriller. The background score augments the suspense in many crucial moments, and plays in your mind way after you have walked out. The songs squeeze past without grabbing much of your attention. There are some panoramic shots of the city which capture the landscape against the dark night effectively.

Nagaram, while churning out with delicate perfection, all the elements expected from a dark mystery, also serves up a strong social message. It puts the spotlight on the liberties that the urban populace gives to evil even when it raises its ugly head in full public view. It reminds us that each one of is but a miniature version of society, and that like all things in life, society, too, does unto us what we do unto it.

This movie is a must-watch for its gripping plot and for the sheer technical finesse in every department that adds greatly to its personality.
Share. Save. Connect.
Tweet
NAGARAM (2017) SNAPSHOT 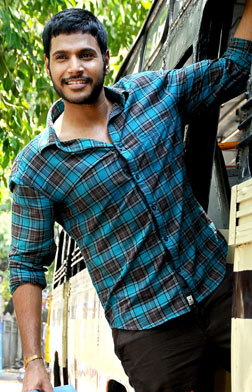 See Nagaram (2017) full details
NAGARAM (2017) USER REVIEWS
1 - 2 OF 2 COMMENTS
POSITIVE  |  NEGATIVE |  NEWEST  |  OLDEST  |  MOST HELPFUL  |  LEAST HELPFUL
Jyothi on 18th Mar 2017, 4:59am | Permalink
Movie Review : Nagaram - A thriller that makes us proud of our movie industry. Realistic, thought provoking, thrilling, spontaneous and mirroring our society while at it. Flawless execution! Not suitable for kids because of some raw violence but a must see for everyone else.

In a moment it can make you fly,
In another it can take you down;
It can make the honest lie,
That's the nature of this town;

It doesn't care for your skin,
Whether it's white or brown;
It bites them all alike,
Without ever letting a frown;
That's the nature of this town;

If you let it get to you,
In your sorrows you will drown;
But if you are brave enough,
You can take the crown;
That's the nature of this town;

It's a city
With no pity
But the gritty
Can win adversity
With intensity
And nicety
Love is a scarcity
Low on density
Sometimes this city
Will take some pity
On not just the gritty...

Right from script, locations, characters, performances- everything was perfect. Sundeep Kishan and Regina Cassandra and all the other actors (new to me), just crawled into the skin of their characters and never came out. The wannabe gangster Winning was hilarious!! And his resignation a hoot!

Overall story is about:
A job candidate who come to the city - who is beaten, when mistaken for another;
A cab driver who comes to the city - whose son is sick and needs medical care;
A guy who lives in the city - loves a girl, and tries to look for a job, while brilliantly protecting her from an acid attack by attacking the attacker;
A don of the city - ruthless would be too modest to describe him, but he is a man after all, with a heart - held by his kidnapped son;
A cop in the city - corrupt, egoistic and with no scruples;
Another guy in the city - selfish, spineless and irresponsible;

How the lives of all these characters intertwine and take you on a suspenseful ride, is Nagaram for you. But I guess the biggest character in the story is the city itself. Always in the background; waiting to pounce on the unsuspecting with whatever it has in store for them..

ADVERTISEMENT
This page was tagged for
Nagaram (2017) telugu movie
Nagaram (2017) reviews
release date
Sundeep Kishan, Regina Cassandra
theatres list
Follow @fullhyderabad
Follow fullhyd.com on
About Hyderabad
The Hyderabad Community
Improve fullhyd.com
More
Our Other Local Guides
Our other sites
© Copyright 1999-2009 LRR Technologies (Hyderabad), Pvt Ltd. All rights reserved. fullhyd, fullhyderabad, Welcome To The Neighbourhood are trademarks of LRR Technologies (Hyderabad) Pvt Ltd. The textual, graphic, audio and audiovisual material in this site is protected by copyright law. You may not copy, distribute, or use this material except as necessary for your personal, non-commercial use. Any trademarks are the properties of their respective owners. More on Hyderabad, India. Jobs in Hyderabad.