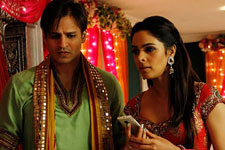 Nupur Barua / fullhyd.com
EDITOR RATING
3.0
Performances
Script
Music/Soundtrack
Visuals
4.0
3.0
5.0
4.0
Suggestions
Can watch again
No
Good for kids
No
Good for dates
No
Wait for OTT
No
KLPD is a phrase that every North Indian worth his salt knows - it is synonymous with sexual frustration. And with the fate of most people chasing fortune, love and money in Delhi. Thus the title of the film, for the discerning viewer.

Sanjay Khanduri set out to make a sequel to his first movie, Ek Chaalis Ki Last Local, but somehow ended up remaking it - only, it is now set in Delhi and not Mumbai. There is an 11:40 pm Metro train that the hero and the heroine miss, and then spend an entire night getting in and out of trouble.

Since it is a dry day, there is a party that has free-flowing alcohol, skimpily-dressed women and kohl-eyed homosexual men with rape on their minds. The oblivious Lucky is suddenly and inexplicably fixated on Lovina (Mallika Sherawat). A series of events lead to the inevitable missing-the-train-and-therefore-stuck-with-each-other plot that then goes nowhere.

The premise, like the first movie, is interesting, and the writer could have played with a lot of moments and incidents. Unfortunately, the script is so weak that it makes Haunted 3D look like a classic. To begin with, the improbable situations that the protagonists find themselves in are likely to put you off. Delhi may not be the safest city in the country, especially if you want to roam the streets past midnight, but it is still the Capital, and it does not transform itself into a deserted village in the hours before dawn. In the film, there are no autos to take the couple to their homes, so they choose to walk all over the city, opting to hang out in the loneliest spots possible, including an empty stadium, and are then surprised when anti-social elements threaten them.

Then there are the tortuous and complicated sub-plots that somehow make things more difficult for Lucky and Lovina - a politician who needs to get his hands on a tape (a little ambiguous), a slap-happy goon who wants to be a dacoit, a policeman who cannot shoot straight, a delivery boy with plenty of pent-up frustration at his misfortune, a farmhouse party that does not terminate despite a zombie-like invasion of a, well, flying man, and a Punjabi wedding sequence (because it is Delhi) that is totally uncalled for.

The makers have the concept of "dark comedy" all figured out in their heads. For the humour quotient, you have the gay jokes, the undying bullet-ridden man, men in their underwear, crass one-liners from prostitutes in a van, a sardar child who takes offence at references to midnight, and gross peeing occasions. It is not slapstick, but neither is it wit (when you have the genre figured out, maybe you can let us know).

Vivek Oberoi with his Delhi accent and lingo is as tolerable as Priyanka Chopra with her hip-hop attitude - unconvincing, to say the least. He cannot, unfortunately, pass off as an "innocent but naughty" boy in his early/mid 20s. His physique is slightly disproportionate, his bare torso will make men and women swoon - in shock. The only thing going for him is his apparent sincerity in portraying the character, unsuitable as he is for the role.

Mallika Sherawat is weird, period. She is least interested in her role, or so it seems - she lacks the fire that she had in her earlier movies, such as Pyaar Ke Side Effects, for example. And she has zero sex appeal.

Anshuman Jha is simply irritating, but then, that is true of all the other actors in the film. So maybe it is not his fault. Ashutosh Rana is funny, in parts, especially when he smiles (a rare sight) in self-indulgence. His gang of buffoons provide the only genuine laughs in the film, albeit very few. Navin Kaushik is intimidating, but, like Rana, is wasted.

To give the director his due - he has managed to shoot at some interesting locations, including the deserted stadium. The cinematography does not do justice to these places, though. As for the production and costume designs - there is nothing to write home about. The music is average, with a couple of hummable songs, but no chartbusters.

KLPD will probably make you curse the day you set foot in the theatre, so it is best to give it a miss. There is a reason Abhay Deol decided not be to a part of the sequel, and now that we know it, we advise you to watch English Vinglish instead.
Share. Save. Connect.
Tweet
KISMAT LOVE PAISA DILLI... SNAPSHOT
KISMAT LOVE PAISA DILLI (KLPD) SNAPSHOT 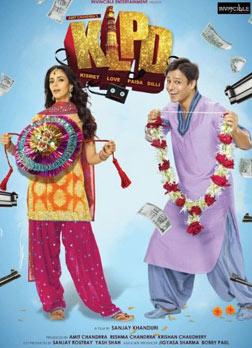 ADVERTISEMENT
This page was tagged for
klpd MOVIE 2020 review
klpd in hindi
Kismat Love Paisa Dilli (KLPD) hindi movie
Kismat Love Paisa Dilli (KLPD) reviews
release date
Follow @fullhyderabad
Follow fullhyd.com on
About Hyderabad
The Hyderabad Community
Improve fullhyd.com
More
Our Other Local Guides
Our other sites
© Copyright 1999-2009 LRR Technologies (Hyderabad), Pvt Ltd. All rights reserved. fullhyd, fullhyderabad, Welcome To The Neighbourhood are trademarks of LRR Technologies (Hyderabad) Pvt Ltd. The textual, graphic, audio and audiovisual material in this site is protected by copyright law. You may not copy, distribute, or use this material except as necessary for your personal, non-commercial use. Any trademarks are the properties of their respective owners. More on Hyderabad, India. Jobs in Hyderabad.