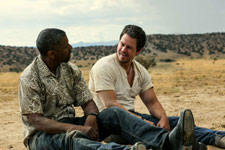 Nupur Barua / fullhyd.com
EDITOR RATING
6.0
Performances
Script
Music/Soundtrack
Visuals
8.0
5.0
6.0
7.0
Suggestions
Can watch again
Yes
Good for kids
No
Good for dates
Yes
Wait to rent it
No
It is a rare feat for a Hollywood movie to hand out a formula film, that reeks of the 1980s, to a more savvy audience in this century, and expect it to work. Add to that Mark Wahlberg, an actor now known for his excellent instincts, and you can expect an entertaining movie. 2 Guns is his second project with Baltasar Korm?kur, the director better known for his bleak dramas and romances made on relatively shoestring budgets. And then there is the magic phrase - "graphic novel". All in all, 2 Guns, based on a graphic novel series of the same name, looks interesting from the first trailer onwards, even when you know that it will be regular fare.

Bobby Trench (Denzel Washington) and Michael Stigman (Mark Wahlberg) are partners in crime. They are a happy duo, but it is a facade. Bobby is actually an investigating officer working undercover for the Drug Enforcement Administration (DEA), and Michael is an undercover Naval Intelligence Officer. Both want to get their hands on the $3 million that drug lord Papi Greco (Edward James Olmos) has in his possession.

What the two men do not know is that their superiors have their own reasons for wanting the money, and it is not as simple a case as acquiring evidence for money laundering.

They discover more than ten times the money when they are done with their heist. The former partners have no choice but to work together, to solve the mystery of the missing money.

The almost formulaic screenplay makes the film so predictable that your teenage son could have written it. Here are three government agencies, in which the seniors are all corrupt, and in which two undercover agents who do not trust each other are forced to become a team because they are ethical, in a way, and patriotic.

It is a story of the bad guys versus the good guys, of Goliath and David, and many other inspirational tales from history and real life. Of course, the good guys win (no-brainer there), and so it is their journey that provides the edge-of-the-seat excitement.

The film has enough violence to make Tarantino blush, and even the usual ribald jokes and the prescribed dialogues do not take away the entertainment value of the movie. The plot borrows heavily from many action movies of the past, and ends with a Mexican stand-off kind of climax (any louder and it can give Singham competition).

There are twists, a romantic angle, betrayal, reluctant friendship, and unexpected chemistry between the lead actors. This action-slash-bromance-slash-thriller movie has mediocre writing and plot points, but you cannot help smiling and cheering along with the good guys.

You will be so caught up with the action (and there is an overdose of it) that you will miss out on the finer details, like the production design and cinematography. 2 Guns is a typical Hollywood movie, and there is nothing in it that deserves special mention, except the two actors who prevent it from becoming a simple, forgettable B-grade film.

As characters, both Bobby and Michael are smug, cocky and smart, but it is their camaraderie, despite all odds, that stands out. The unlikely pairing of Denzel Washington and Mark Wahlberg is a genius stroke, whoever thought of it, and the rest of the movie then does not matter. Both the actors clearly had a blast while shooting, and it shows.

The other actors support their harmony ably - from Paula Patton as Bobby's love interest, to James Marsden as Michael's boss. Edward James Olmos is menacing, but it is Bill Paxton who becomes more intimidating.

2 Guns is a movie that you will not remember a year from now - at least not the story - but it will definitely bring a smile to your face. And thus the mission - to entertain - is accomplished. It is a must watch, if you are not too picky about storylines and creativity. Leave your intelligence at home, and have fun as Bobby and Michael beat up the bad guys and rile each other while doing it.
Share. Save. Connect.
Tweet
2 GUNS SNAPSHOT 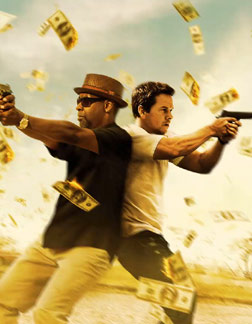 ADVERTISEMENT
This page was tagged for
2 Guns english movie
2 Guns reviews
release date
Denzel Washington, Mark Wahlberg
theatres list
Follow @fullhyderabad
Follow fullhyd.com on
About Hyderabad
The Hyderabad Community
Improve fullhyd.com
More
Our Other Local Guides
Our other sites
© Copyright 1999-2009 LRR Technologies (Hyderabad), Pvt Ltd. All rights reserved. fullhyd, fullhyderabad, Welcome To The Neighbourhood are trademarks of LRR Technologies (Hyderabad) Pvt Ltd. The textual, graphic, audio and audiovisual material in this site is protected by copyright law. You may not copy, distribute, or use this material except as necessary for your personal, non-commercial use. Any trademarks are the properties of their respective owners. More on Hyderabad, India. Jobs in Hyderabad.